Piggybacking on last week’s post about designing a home wall, here is a quick virtual tour of the Lazy H Climbing Barn. Note that I didn’t go through any logical process when designing it, I just eye-balled everything, and I paid for my impatience with a wall that was too steep. Six months in I was compelled to tear it down and re-build it.  Other than that, I’m pretty much happy with it (see more below). 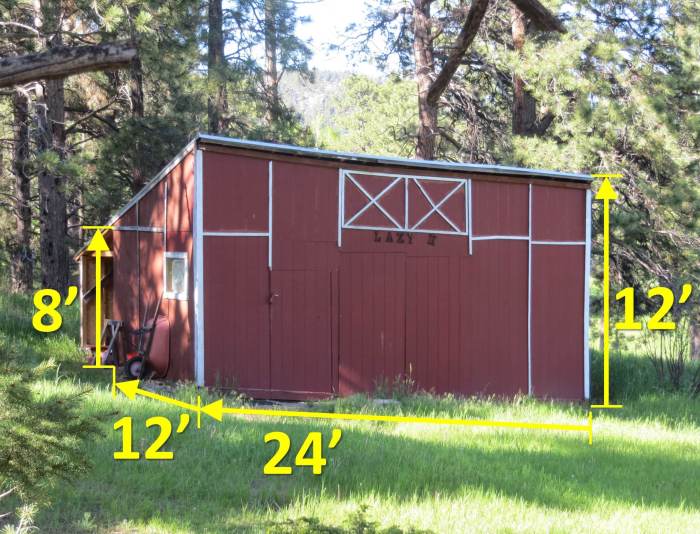 The Lazy H. Note how the barn is built to match the sloping hillside.

The floor dimensions of the Lazy H are roughly 12-feet by 24-feet, (with the 24-foot-long walls running roughly east-west). The south exterior wall is 12-feet high, and the north exterior wall is 8-feet high, with a slanted roof spanning those walls (with no interior bracing aside from the joists that support the climbing surfaces). The barn was built decades ago to match the contour of the sloping hillside. There isn’t a square angle in the place, and if I were doing it again I would tear the entire rat trap down and start over!  It was used as an actual barn until I moved in.  At that point the roof was full of holes and there was literally a mountain of horse manure on the floorless ground.  Every flat surface was covered in rodent feces.  I spent the first several days just shoveling shit and wheeling it outside. So many memories 🙂

The climbing surfaces are as follows:

The vertical East Wall of the Lazy H. It was designed so as to not interfere with the South and North Walls.  It’s great for my kids who love to climb up to and stick their heads out of the window, but I don’t use it except to connect the North and South Walls when warming up or ARCing. 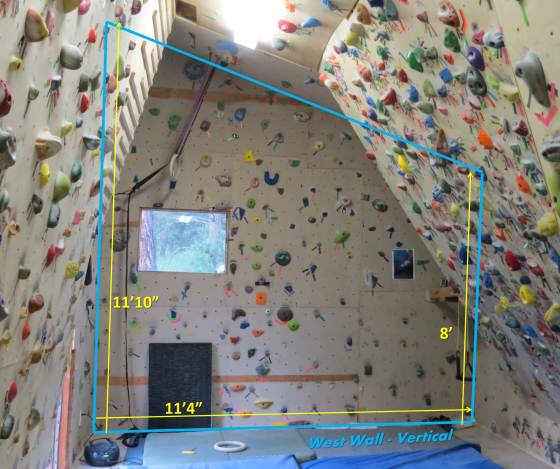 The vertical West Wall of the Lazy H. This wall is great for warming up and ARCing on small, insecure hand and footholds. I credit it with keeping my footwork honed.  It has a few boulder problems that I climbed regularly when training for To Bolt Or Not To Be. Those problems haven’t been touched in the six-plus years since 🙂

The 16-feet wide, 8-degree overhanging panel on the east end of the South Wall. This is prime ARC and warmup terrain. It also has a few Limit Boulder problems that are generally thin and hard on my skin.

The west end of the north wall. Pretty much useless, although it allows for a novel arête feature. I’d much rather have 40 square feet more of 35-degree overhang…

The Money Wall, my happy place for Limit Bouldering. If only it had some more holds!

The roof system on the east end of the North Wall. This got very little use until the last year or so, when I accumulated several outdoor roof projects. Since then I’ve made a point to do several Limit Boulder Problems on this section, along with a couple problems in my Warmup Boulder Ladder. Still, for the amount of space it consumes, its a terrible waste.

The Lazy H is essentially a long corridor, and occasionally I will smack into the South Wall when sticking big dynos to the top of the North Wall. Also, it gets crowded in here really quick.

All told, I feel extremely fortunate to have such a fantastic training area.  When I began building it, I had doubts that I would enjoy it enough to continue using it.  Seven years later, I couldn’t imagine training anywhere else.  It has easily paid for itself (in terms of money saved on gym memberships and gas) and its a huge hit with my kids and their friends.  I seriously doubt I would be the climber I am today without the companionship of the trusty Lazy H.

For some brief footage of the Lazy H in action, check out this video.