With my sights set on a new alpine route in Alaska in the spring, I needed a partner I could trust and could also commit to the time off.  I scrolled through my black book and landed on Canadian crusher Alik Berg.  Thing was: we had never climbed together.  He recommended we do a trial run on his home turf of the Canadian Rockies.  So I loaded up the Chevy van and pointed north once again.

On arrival to Canmore Alberta, located 20 minutes east of Banff, I was immediately very intimidated by how massive the peaks were looming on all sides of me.  Wow, I thought, this is the Yosemite of Alpine climbing!

After climbing the classic The Day After Le Vacances du Monsouir Hulot on the Stanley Headwall,  Alik proclaimed we were ready for a real Alaska warm up.  He held up a black and white photo with a line going up a mountain.  “What do you think?” he asked.  I saw what looked like 3000 feet of steep snow up to a rock head wall of about a 1000 feet.  I thought to myself: Sure why not, we will figure it out.

“Sure man looks cool,” I said. 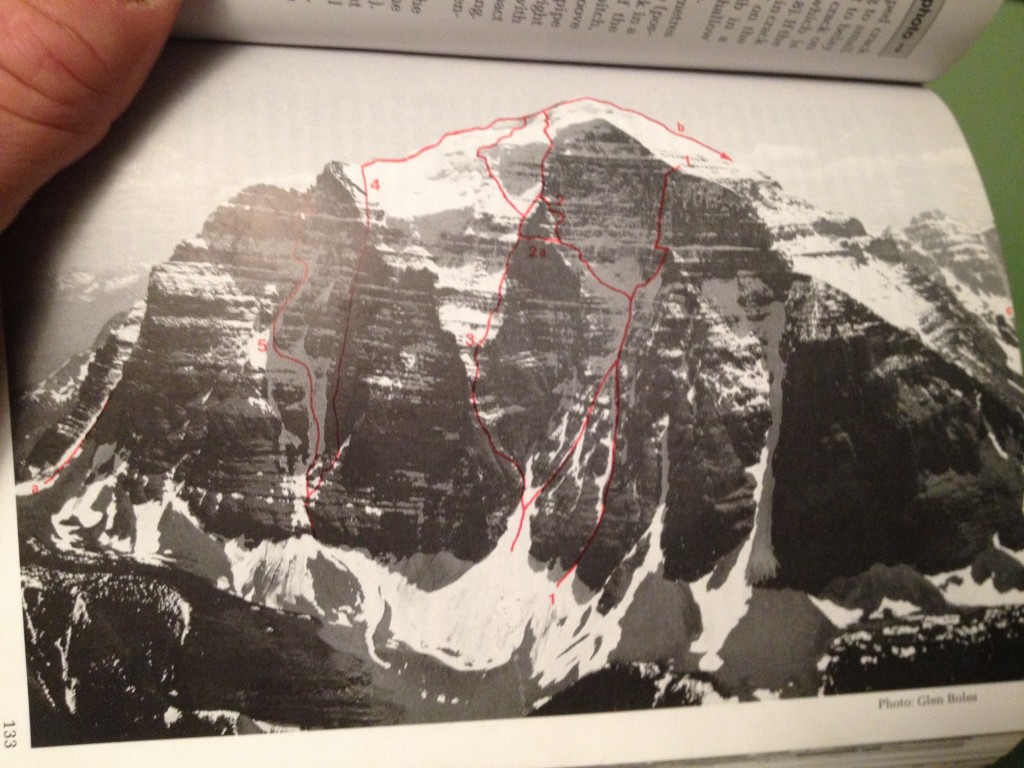 The red line furthest to the right is the route we would attempt the Greenwood/Locke on the N. Face of Mt. Temple.

With heavy packs and back country skis, we departed the car on Feb 25th with a solid weather forecast.  The seven mile skin in was beautiful; big trees with a deep pine fragrance.  Tracks of moose and other critters dotted the trail.   We left our skis at the base and strapped our crampons on.  To our good fortune, the snow on the lower portion of the route was solid neve and we made quick time to the headwall.  Two pitches of M5-M6 brought us to our bivy platform on the first snow band.  Cuddling up in my bag I was feeling strong and confident.

“Man looks really steep up there” Alik announced.  “I bet its really run out.  We will be lucky to get any pro.”  I inquisitively peeked out of my snug bag.  It was at this point that Alik started to regale me with all of the tremendous lore of the route.  “Its turned back close to a dozen parties in winter,  only the legend Raphael Slawniski with Ben Firth have managed it.  One guy degloved his hand trying, the legend Steve House fell 80 feet and broke his pelvis.”

“Dude,” I feverishly announced, “stop talking, your freaking me out!”  Luckily, exhausted from the days efforts, I managed to doze off for a few hours of sleep. 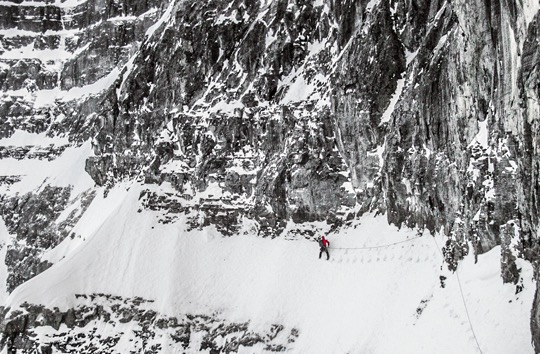 We awoke early and started climbing just before sunrise.  We climbed 1200 feet of spectacular 5.10 limestone with ice tools and crampons.  The exposure was magnificent and the climbing was genuinely fun and took gear well.  The winter conditions had frozen all the loose bits in place, and we both agreed it should be a modern mixed climbing classic! 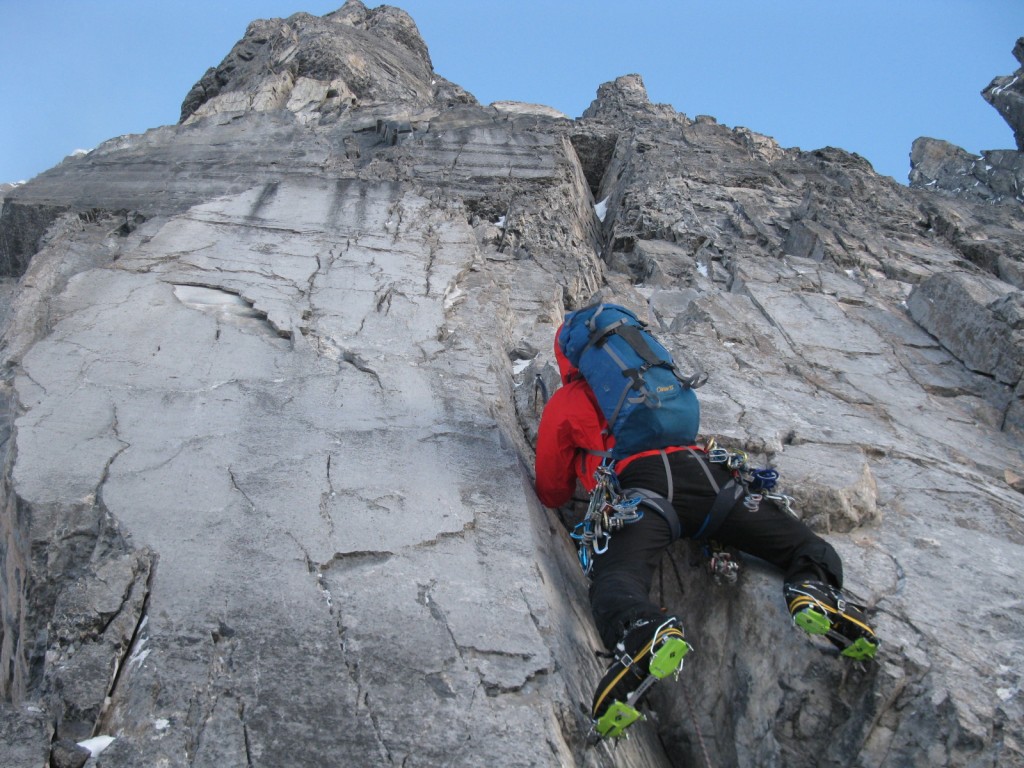 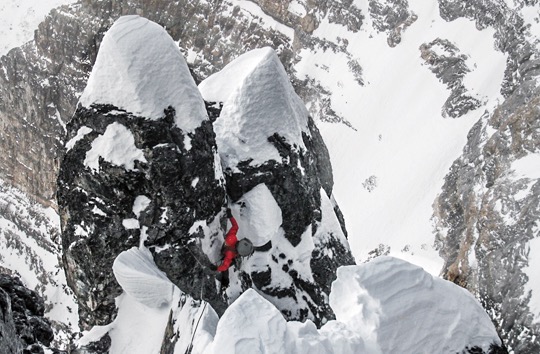 The Clam pitch on the Greenwood/Locke, one of the most amazing alpine pitches either of us have seen. 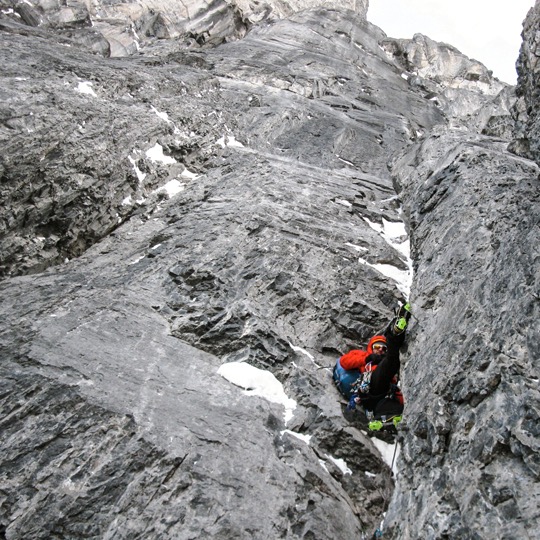 Putting the off-width skills to use high on the Greenwood/Locke headwall.

That night I spilled a half-liter of Gatorade in my sleeping bag, and had a proper freak out with the sub zero temps!  Alik, cool and calm, said, “dude chill, its gonna be fine”  I knew then and their Alik would be a great future climbing partner.  The following day we summited and had an amazing panorama of the Canadian Rockies.  It was news to us we had made the second winter ascent.  http://www.alpinist.com/doc/web15w/wfeature-mt-temple-history-winter-ascent.  We began to make plans for Alaska.

Returning to Alik’s house and standing in the hot shower with a beer in hand, I felt the warm water soak into my bones and I had a deep sense of satisfaction.  I was happy that 20 years of constant dedication to a sport I loved was finally paying off.  That we had just completed a rather difficult climb with great joy, confidence and enjoyment.  Sure, we suffered.  But with out the suffering, the shower and soft bed would not feel nearly as good.  I relished in my worn, fatigued and battered body.

Two days later I said good by to Alik and the Canadian Rockies,  and packed the van up to head south back to Bozeman, Montana.  I was slated not only to assist but also to participate in the Sierra Club veterans ice climbing week in Hyalite hosted by Montana Alpine Guides.

Volunteering has taught me one thing.  I never regret doing it!  Every time I put others before myself it feels incredible.  I get back double what ever I put into it.  It is medicine for the soul in more ways than one.  I cant explain the psychology of it, but for me it works wonders.  As a veteran myself of three tours in Afghanistan as a Air Force Pararescuman, I find great solace and personal healing when helping other vets get out side and into the wilderness.  We share a common bond, a common thread.  The intrinsic team work the 12 of us shared was unforgettable during this 5 day ice climbing course. 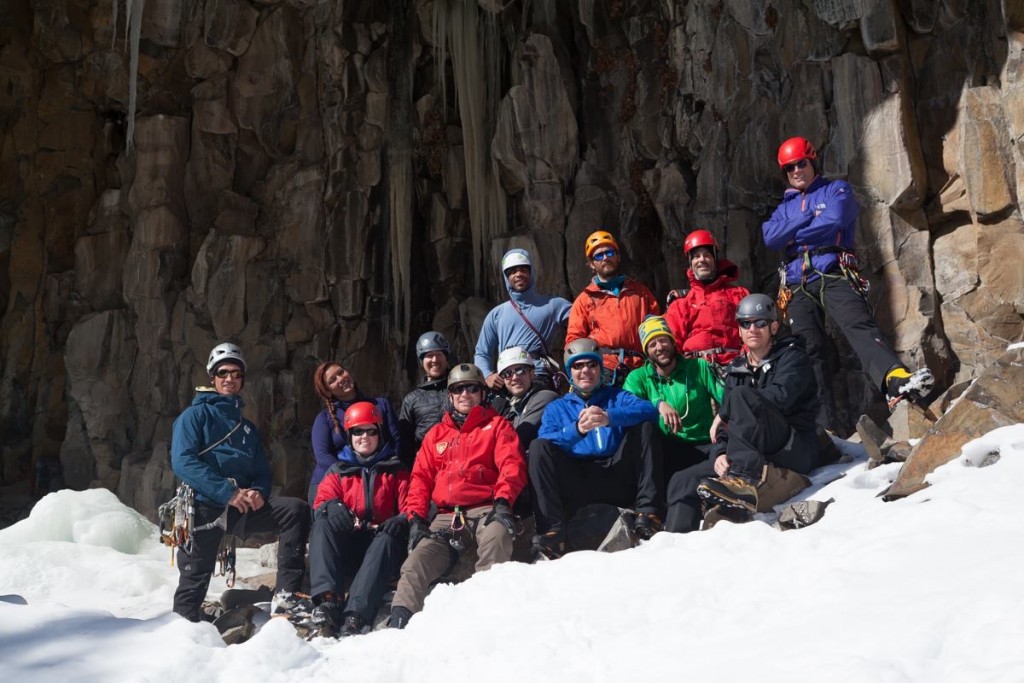