Hidden in the back of my 2003 Toyota Tacoma is super-simple, super cheap and comfy sleeping rig. It goes in and out in less than a minute, and I can get two bikes and 3 full-height ActionPackers and a cooler inside. I can hang out and cook inside if the weather blows and can hide all my gear underneath the full-width bed. Read on… 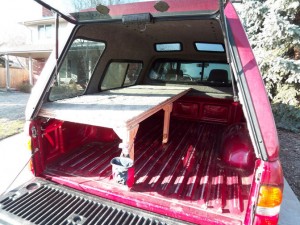 Sleeping deck in “half” mode

Check out the split deck configuration. You can see how it’s made in this photo. A ¾” plywood (don’t try to use ½” ply. It sags.) bed is supported by two sections of 2”X4” that are diagonally braced. The other part of the bed simply rests on top of the shell lip. The bed is held in place by 2 cam straps that pull the wood diagonally down and into the corners of the truck bed. Suck up the front one really tight, then the back one just snug enough to hold it down. I built up small ledges on the middle side of the posts on which to rest the other half of the bed. This is how I set it up if the weather is crappy. I have a low beach chair which I can slide in and then I cook and read from inside. 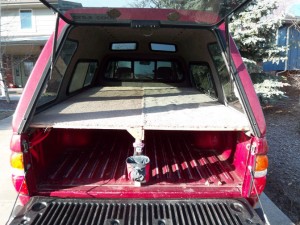 Here you can see the double bed rig set up. The second half of the bed is simply a flat ¾” plywood board cut the same size as the main deck. When it’s stored on top of the main deck, as in the previous picture, there is room for a lawnmower or two bikes. Just slide it over and you have a double bed. On this bed I stapled some scrap carpet so it’s more comfortable. In some previous beds I glued a foam layer between the carpet and boards thinking that I wouldn’t need a ThermaRest. Nope… Still needed that. I’ve talked to a lot of people who set their bed level at the top of the wheel wells, thinking that they wanted the extra headroom. BS I say. That completely cripples your under-bed storage space and—what do you need headroom for? I’m only on the bed when I’m sleeping and I usually sleep lying down. 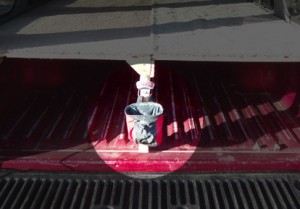 Here’s a nice detail: notice the bottle opener on the center post. The old chalkbag is to catch the bottle caps. To fool the cops in Utah I bought one that says Coke rather than Budweiser. The blacked ribbed tailgate cover sucked. It was so slippery that even when flat, things would slide off of it. Sooooo.

I took off that slippery black plastic tailgate cover and screwed on a plywood one. It’s a cutting board, knife holder and cupholder. The cutout perfectly fits a JetBoil for no-spill tailgate coffee.

Here’s another good trick. The picture on the left shows a Yakima Side Loaders I’ve bolted through the shell. I put them on to support a safari rack I use when the Yakima cross bars aren’t enough. On the right, you can see that, inside, I hung bolt hangers from which I can hang water bladders, trash bags, clotheslines or whatever else I feel like. 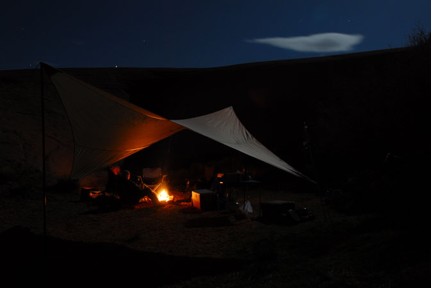 I travel with a MSR (formerly Moss) Parawing. This is an amazing piece of nylon which will keep rain and sun off, even when it’s blowing 50 mph. It’s by far the best piece of nylon I own. If I set it up carefully, I can back the truck underneath and have a beautiful and welcoming “porch” under which to hang out and drink afternoon margaritas. It’s insanely expensive and worth every penny. Get the 19’ version and buy 4, 24” pieces of rebar to use as stakes. Be sure to get the rebar “caps” or you’ll chew up your shins when you get up to pee in the night. I replaced all the guy lines with at least 30’ feet each of that cool reflective tent cord. I think they call it “Nightline”. Don’t forget to bring a BIG hammer for the rebar. I carry a 3lb sledge just for this purpose.

So if you’re out in the desert or camping at a crag somewhere stop on by for a first hand look. More than likely I’ll have a cool beer or a margarita available.

got stump? The Best Way to Rig the Lower/Rappel off of a Sport Route
Scroll to top