There were two activities on the Swiss trip that were the unequivocal highlights. This was the first one. I’ve done about 10 Via Ferratas now, and this was hands-down the best I’ve done. It has spectacular scenery, incredible position, interesting apparatus and it’s well-designed and maintained. 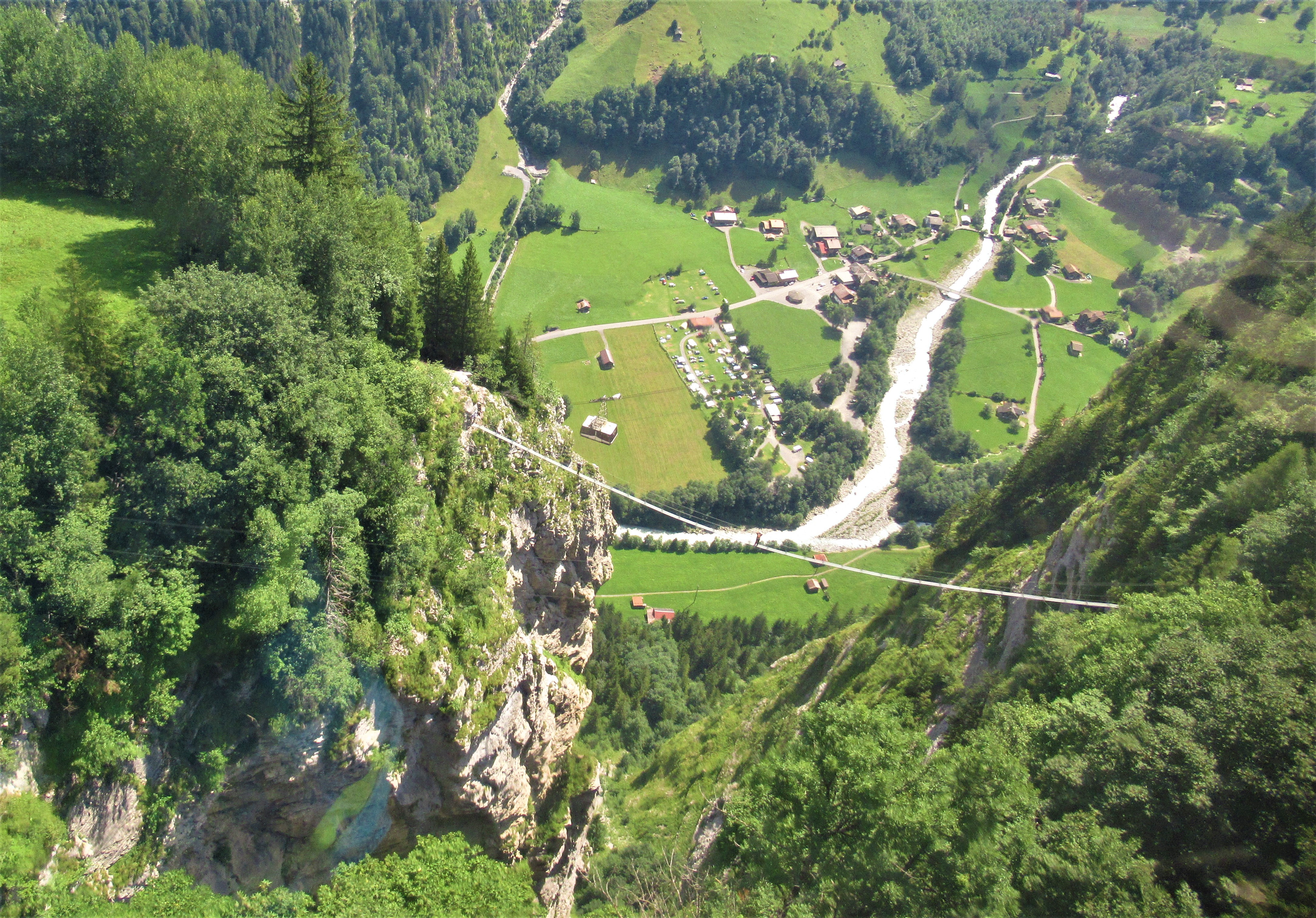 VF Murren culminates in a spectacular hanging bridge that spans a massive, 1500-foot-deep chasm. This shot was taken from the cable car that runs between Gimmelwald and Murren.

For most well-travelled climbers, the typical Via Ferrata will seem mundane, if not completely boring. Not so VF Murren! While never physically challenging by climbing standards, the exposure on this route is no joke, and will get the attention of even the most grizzled El Cap veteran. 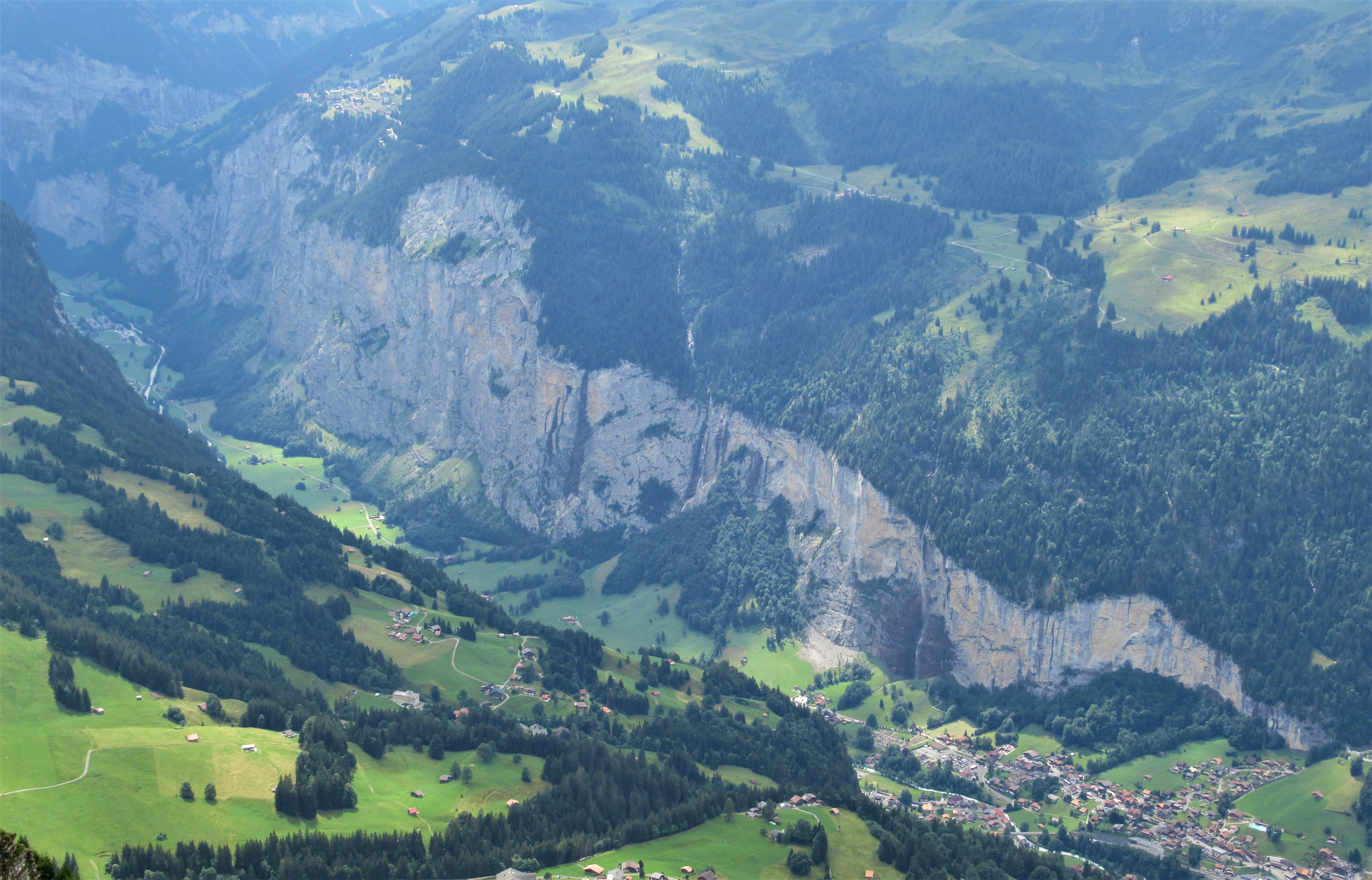 The west wall of the Lauterbrunnen Valley. The village of Murren is sunlit and visible in the far upper left corner—the VF starts in Murren and follows the lip of the massive cliff to Gimmelwald (which is south, or left in the photo).

To appreciate the route, it helps to understand a bit about the surrounding geography. The Lauterbrunnen Valley, located about 10 miles south of the bustling outdoor mecca Interlaken, is perhaps best described as a limestone version of Yosemite Valley. Although not quite as deep or long as Yosemite Valley, the upper rim of the gorge is studded with cloud-piercing glaciated peaks, including the Eiger, the Monch and the Jungfrau. 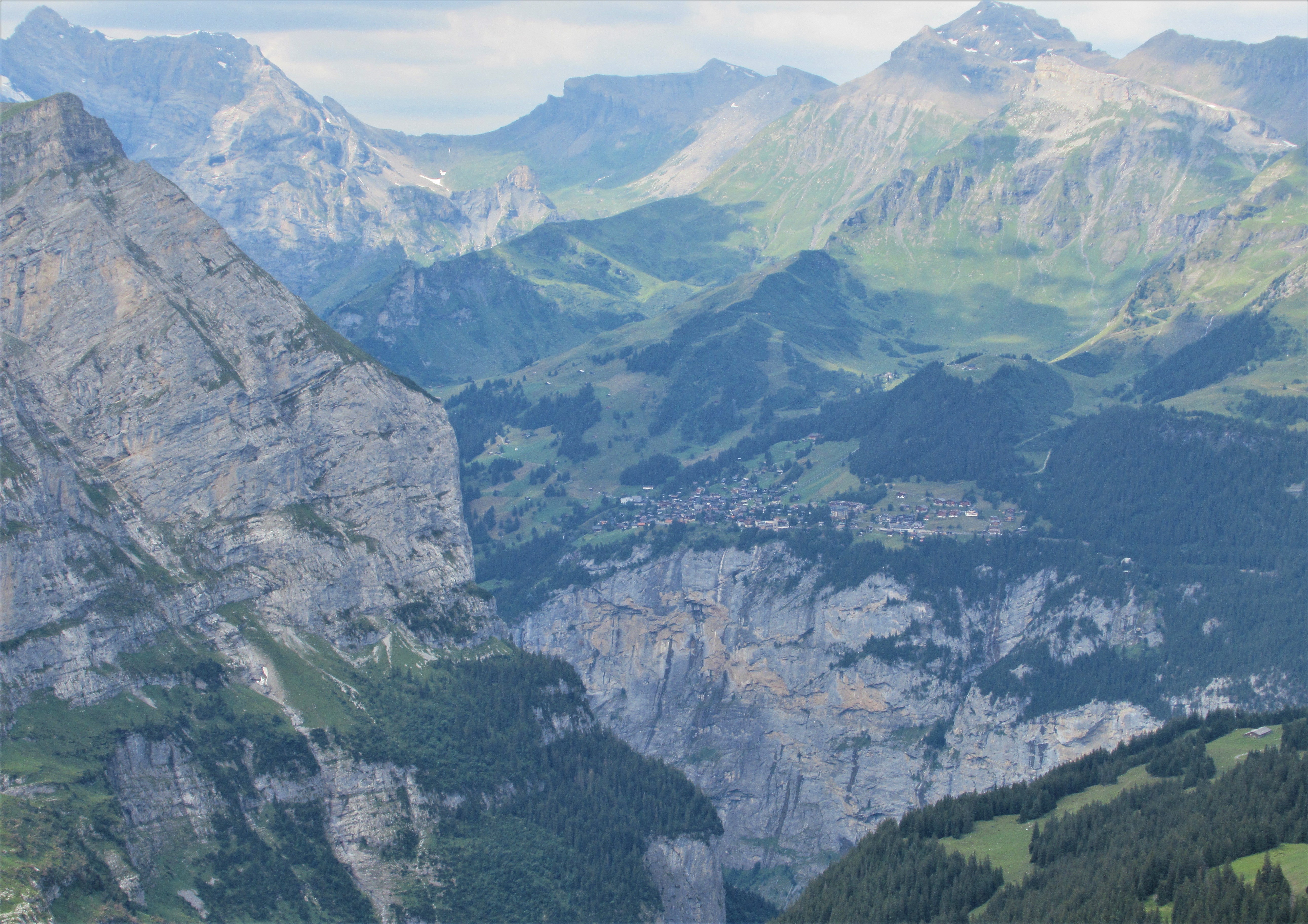 The village of Murren, and the massive cliff it sits atop—from the top of the Eiger Rotstock. The VF Murrent starts in the village and traverses the lip of the cliff towards the south (left in the photo).

The valley hub is the village of Lauterbrunnen, which can be accessed by car, train, etc. The lower valley is renowned for its 2500-feet-tall limestone walls and ubiquitous waterfalls. Atop these walls, along the rim of the canyon, are a serious of tiny, “car-free” hamlets, accessed by train, cable car, or a combination. Two of the more well-known are the hamlets of Murren and Gimmelwald (home to the world-class sport crag of the same name). 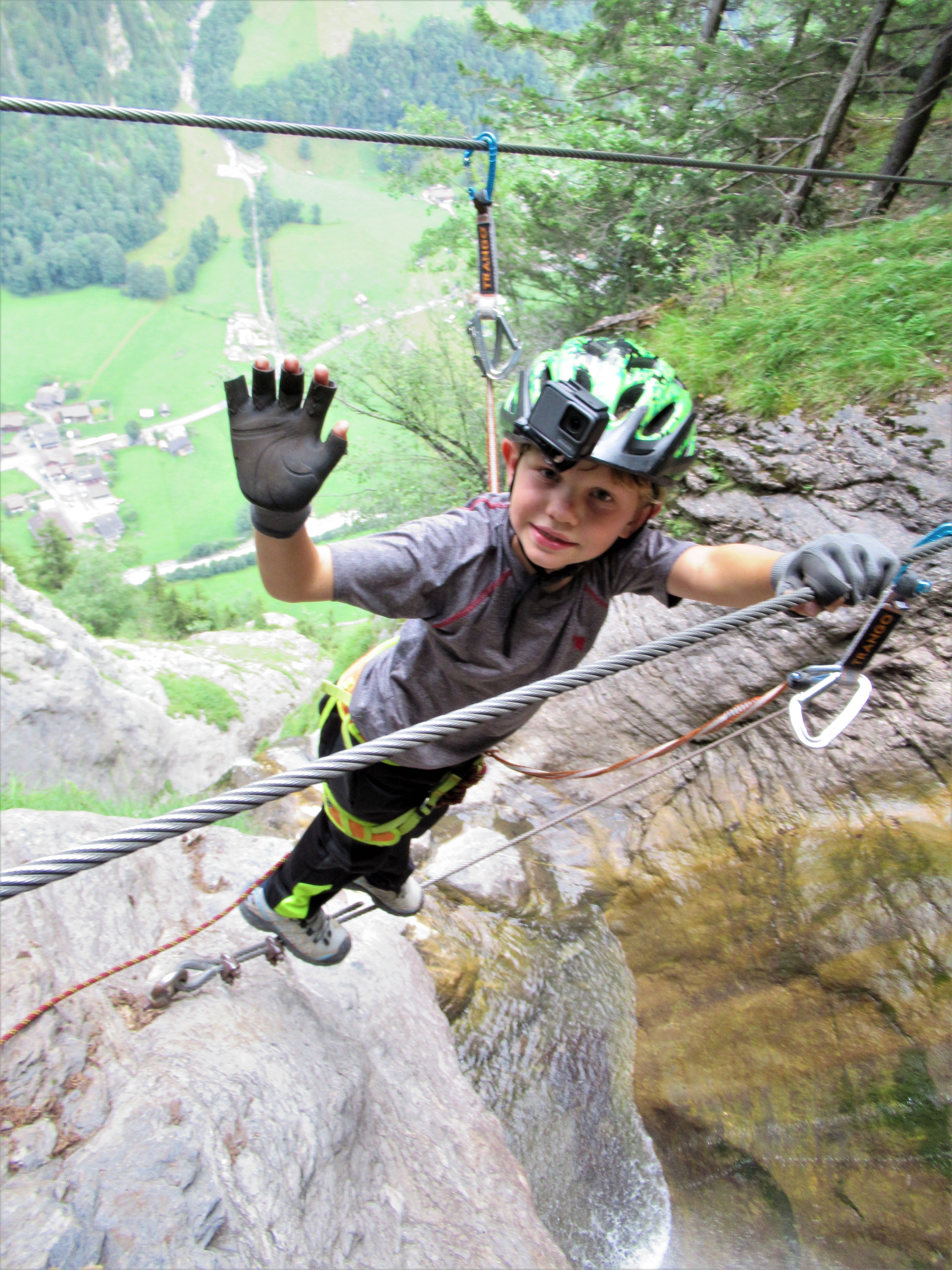 The VF Murren traverses the lip of the west side of the canyon for two kilometers, from Murren to Gimmelwald. It weaves in and out of forest as the terrain dictates, but in the key spots it is literally right on the lip of a 2000-foot tall cliff. It’s like stepping out of a dense forest onto a small ledge on the side of El Cap with nothing but air beneath your feet. It is so perfectly exposed that there is literally a BASE jumping platform built into the route! 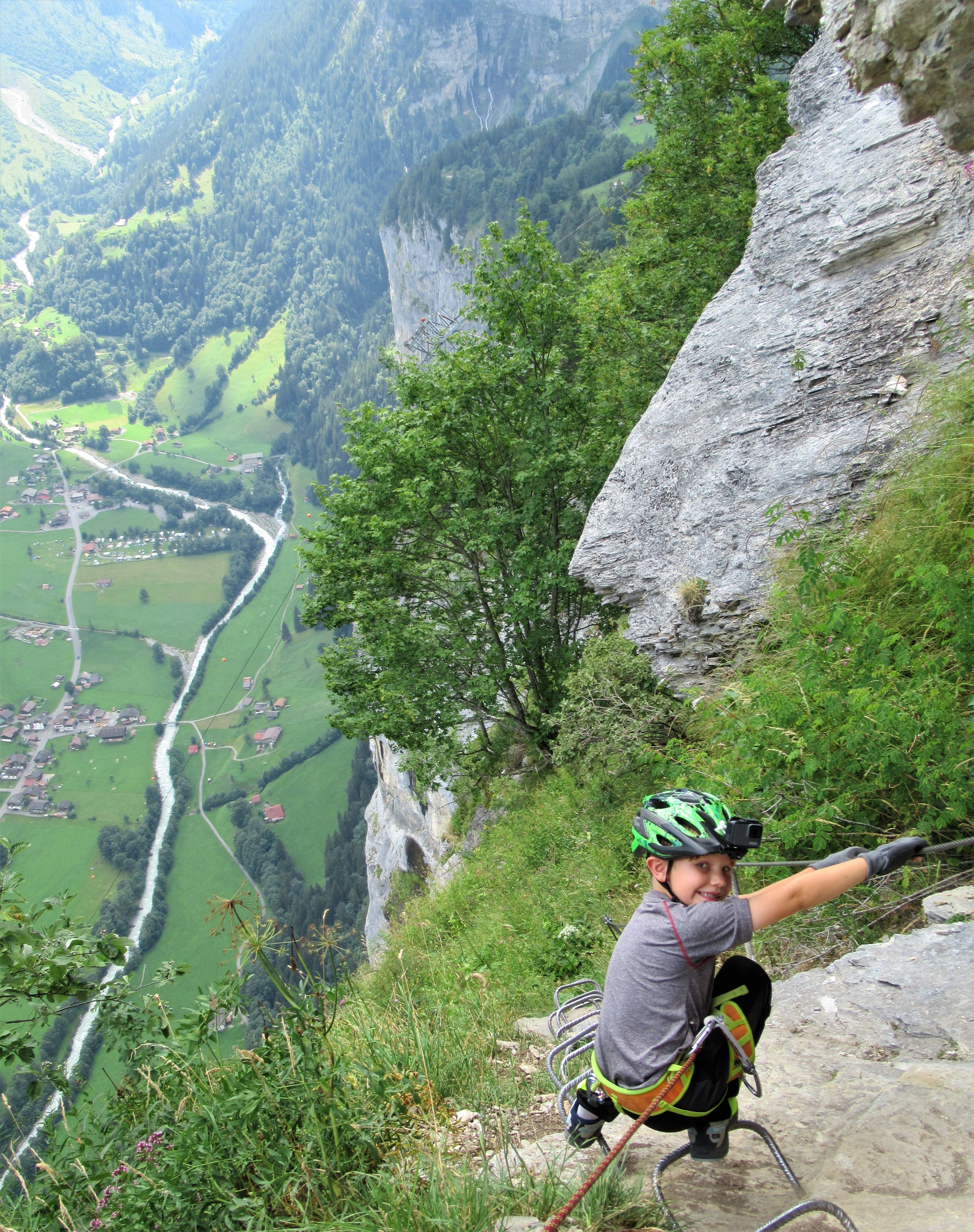 Logan heading towards the business.

I was really psyched to check out this VF, but I wasn’t sure how Logan would handle it. He’s very brave, but that’s a lot of exposure, and in my experience it can really take some getting used to. There’s a big difference between climbing your way up to a really exposed position, allowing your mind to acclimate as you steadily ascend versus just walking out to the edge of a cliff, and it’s hard to know how someone will react to that situation. 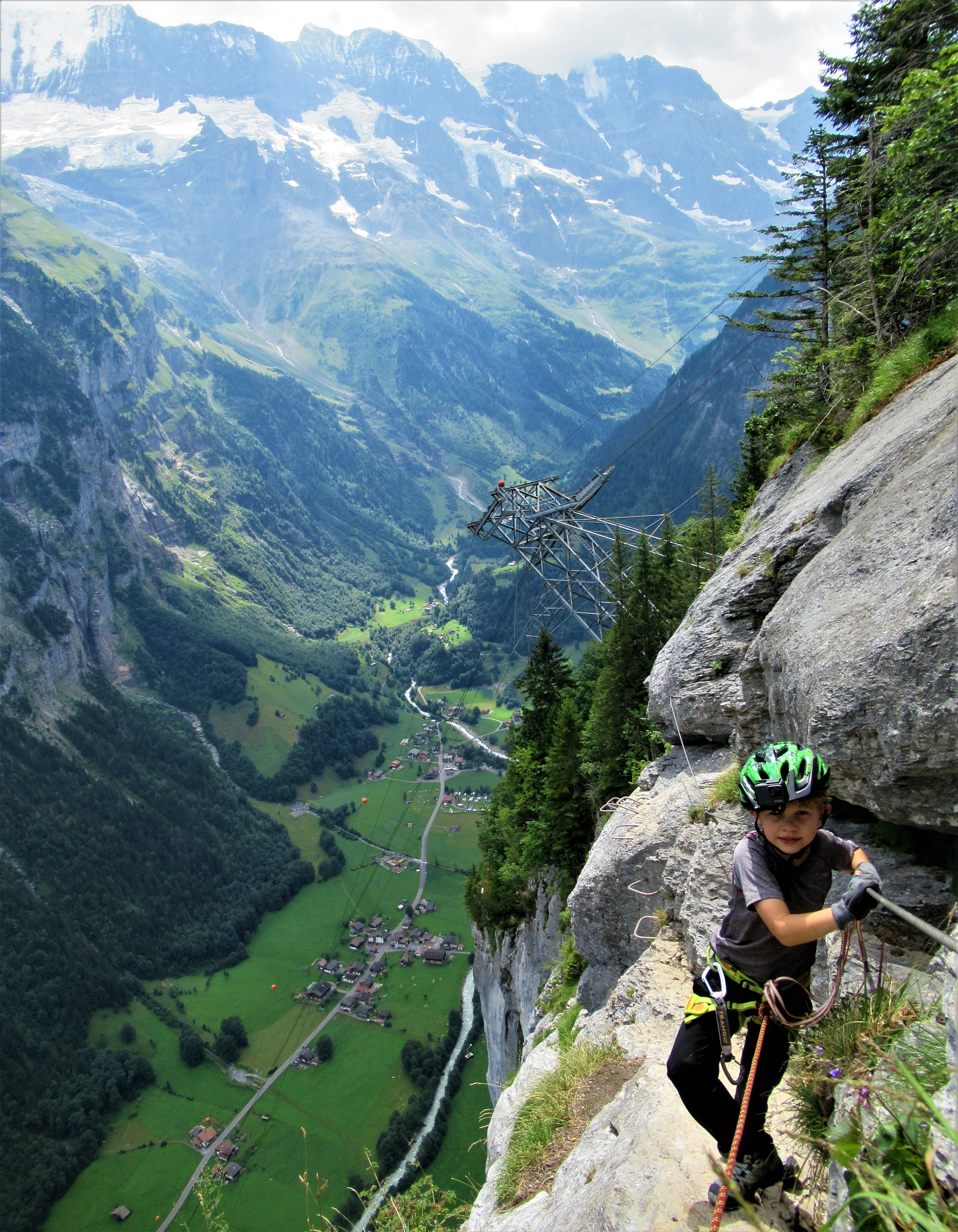 The route begins with a long stretch of easy hiking through forest, protected by wire. A series of downclimbs along stemples takes you out to the top of the cliff, where the route gets right down to business. The most exposed stretch comes pretty early, traversing an intermittent ledge system. The walls drop straight down here, with nothing but air for 2000 feet. For a brief stretch the ledge disappears and stemples lead across the void. This is not the technical crux, but surely the psychological crux. 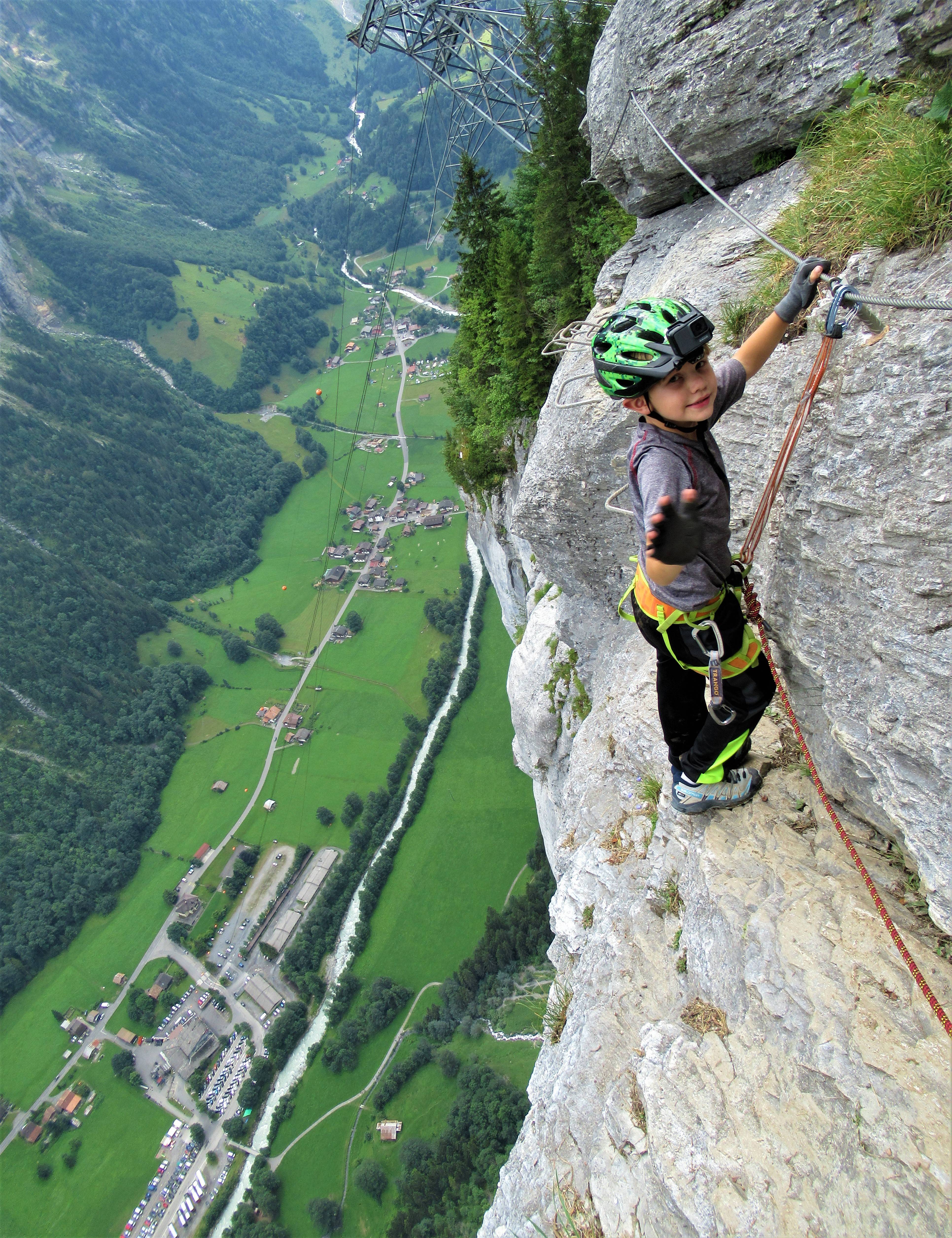 Logan never seemed concerned about the 2000-foot drop. Should I be worried about that?

It turned out my concerns for Logan were completely unfounded. I don’t think Logan would have even noticed the exposure if I hadn’t pointed it out. He cruised it all with a smile on his face, and if anything I struggled to keep up with him while taking pictures and managing the rope. 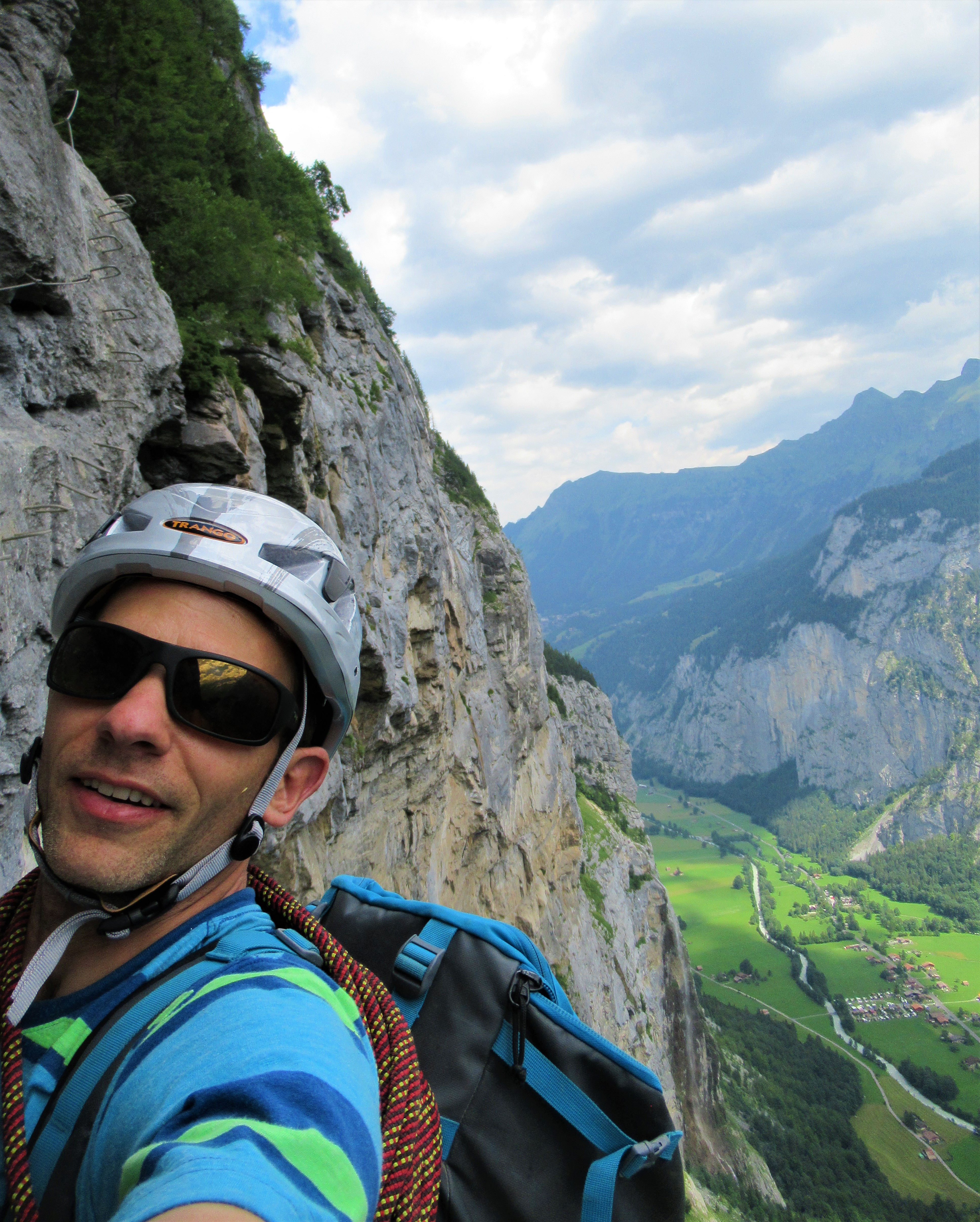 Me in the same spot as above. Note the arcing line of stemples up and left from my head.

After the lip traverse, the route heads back into the forest for a while, eventually leading to a “Monkey Birdge” (or “Three-wire Bridge”) that crosses one of the many waterfalls. Logan wasn’t quite tall enough to reach between the wires on this one, so I rigged it as a Tyrolean for him and pulled him across. 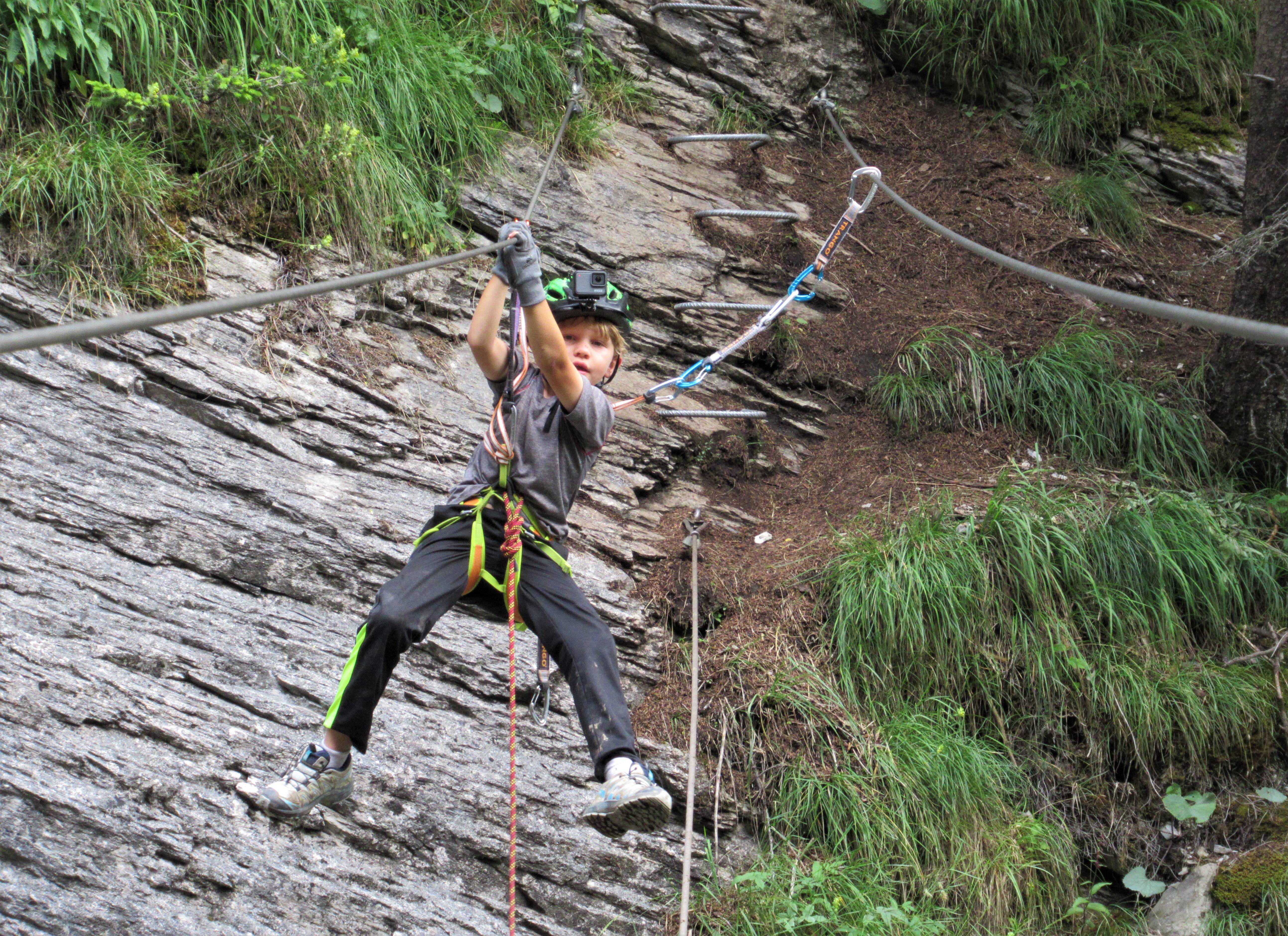 More wire through the forest leads to what I felt was the physical crux, a series of 4 long ladder down-climbs, the last of which was slightly overhanging. Since we had sport-climbed at Gimmelwald earlier in the day, I was doing the VF with my entire sport-climbing kit on my back, 70-meter rope included. After a morning of struggling to grasp Gimmelwald’s biceps-bursting routes, I found that last, overhanging ladder to be rather taxing! 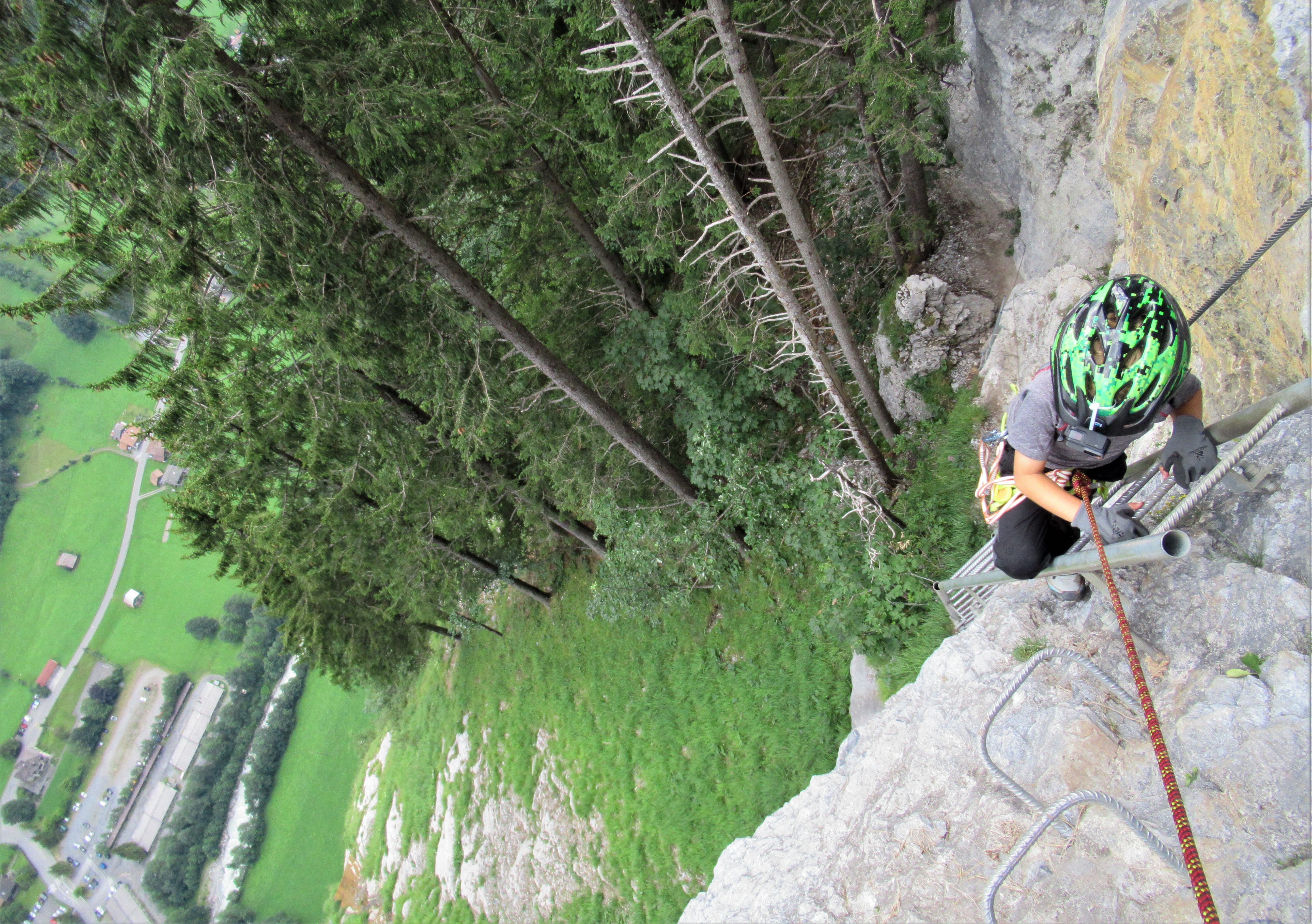 Once again, Logan had no issues and didn’t think it was hard despite my whining. Next came a shorter 3-wire bridge, which Logan was able to traverse on his feet. Another long stretch of hiking leads to the highlight of the route, and the most incredible VF feature I’ve ever seen, a massive hanging bridge (aka “Nepalese Bridge”).

I don’t know the exact dimensions, but I’d guess the bridge is over 100-meters long, and crosses a chasm over 1500-feet deep. This was the first obstacle that gave Logan pause. Sadly he’s already a bit jaded and hard to impress, but when he came around the corner and laid eyes on the hanging bridge, he was in awe. 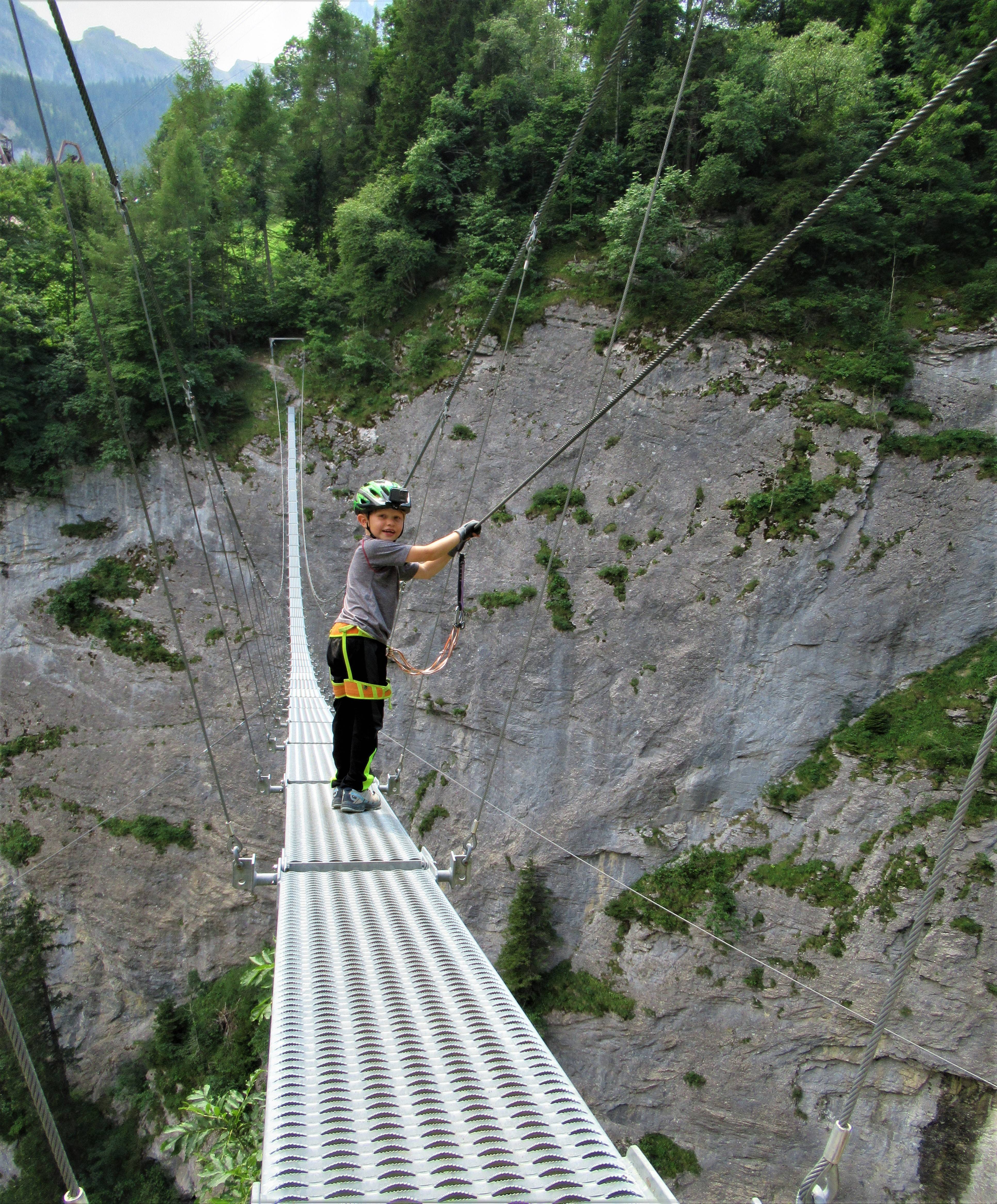 Logan starting across the bridge. 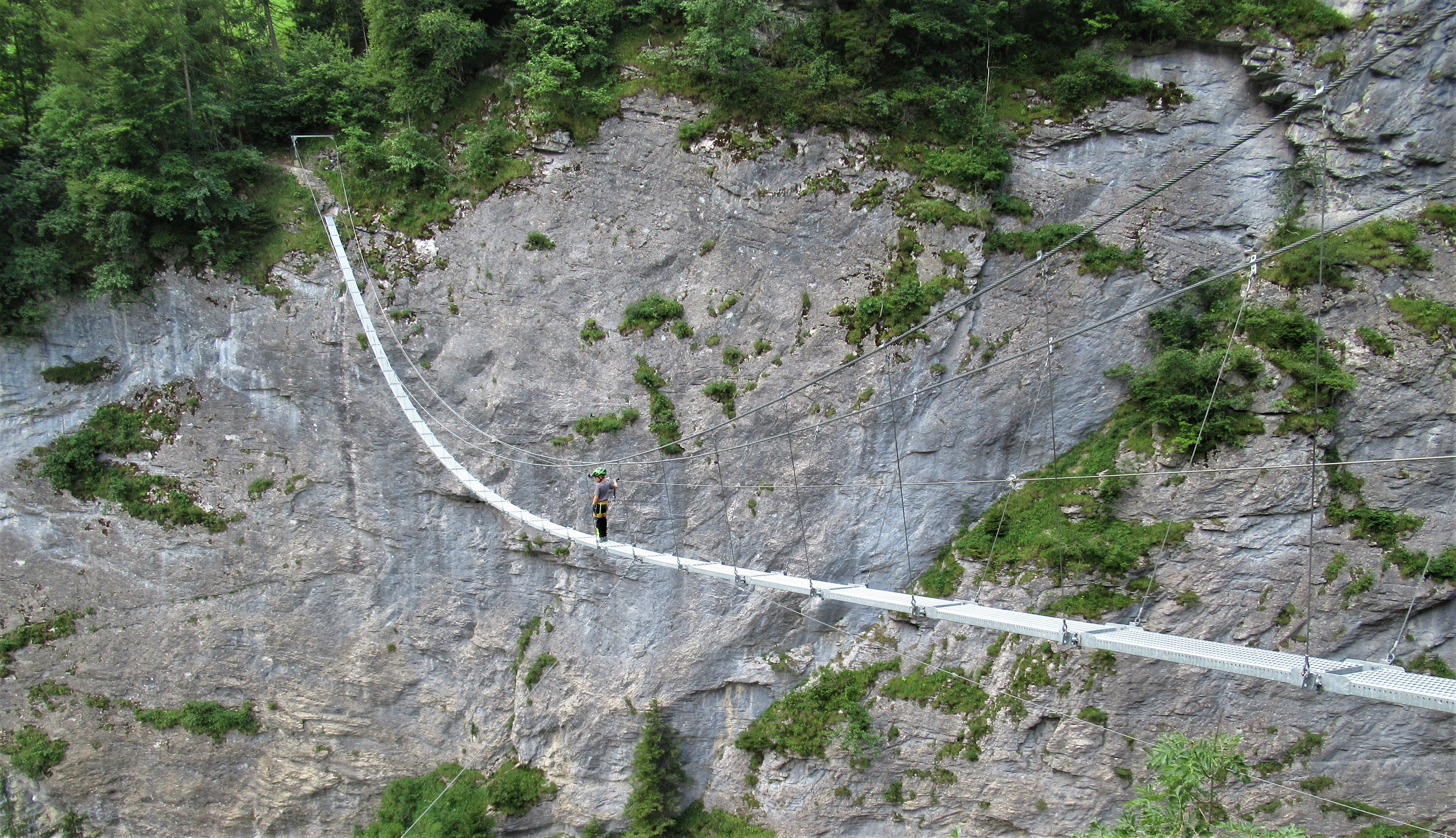 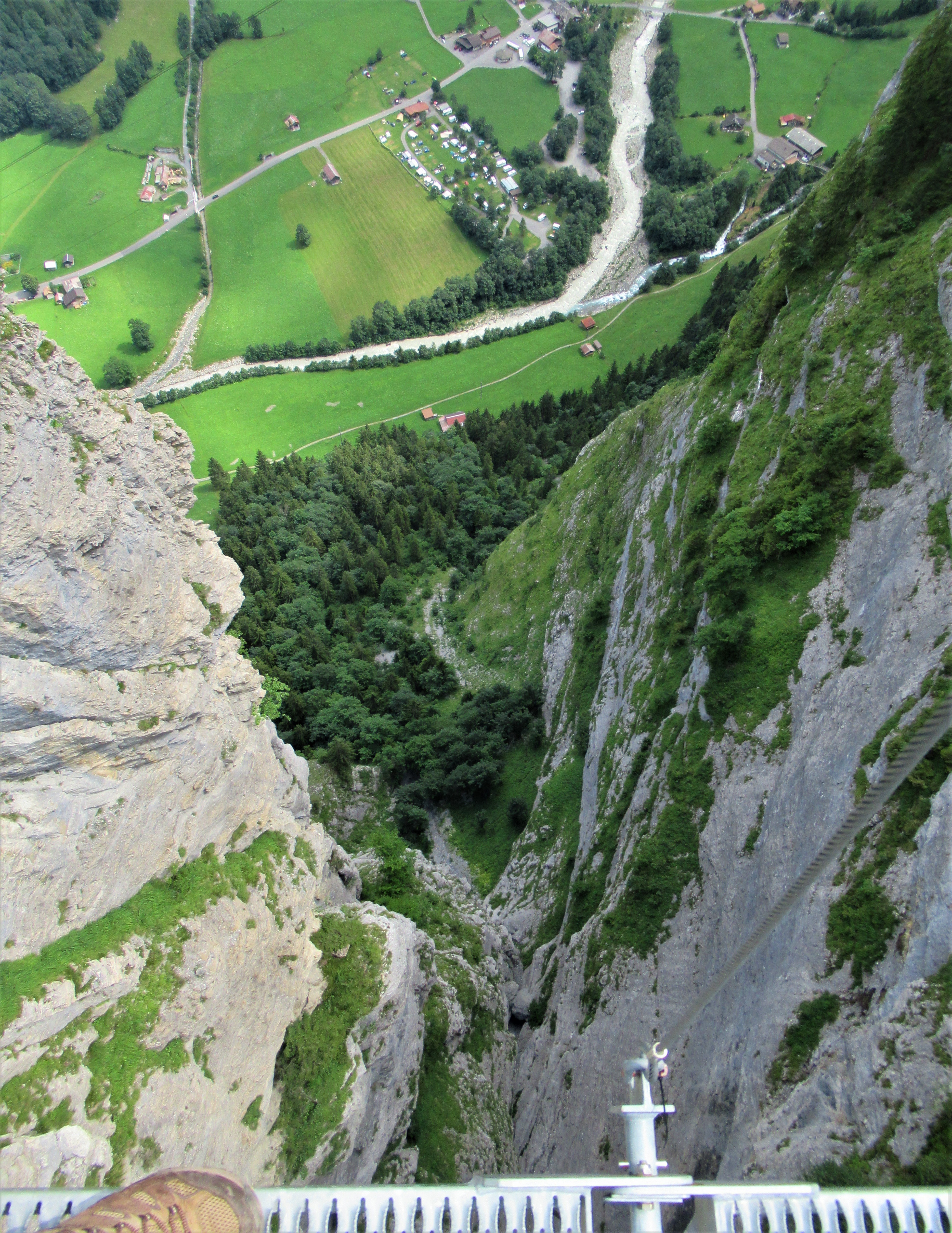 Despite its impressive engineering, the bridge was quite rickety, and the hand wires were hard for Logan to reach, so he took his time traversing the wobbly catwalk. Eventually he became comfortable and cruised the second half of the crossing. 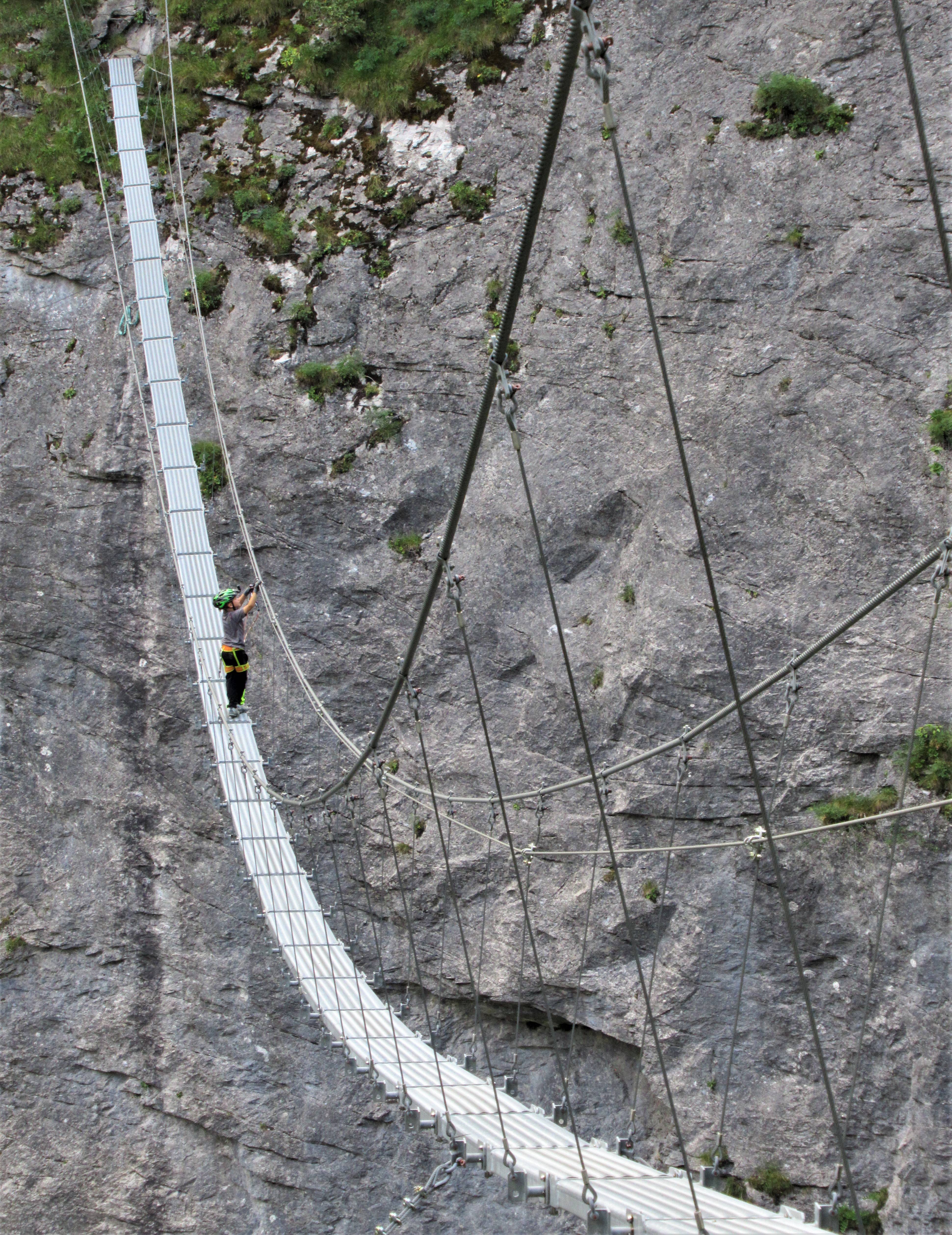 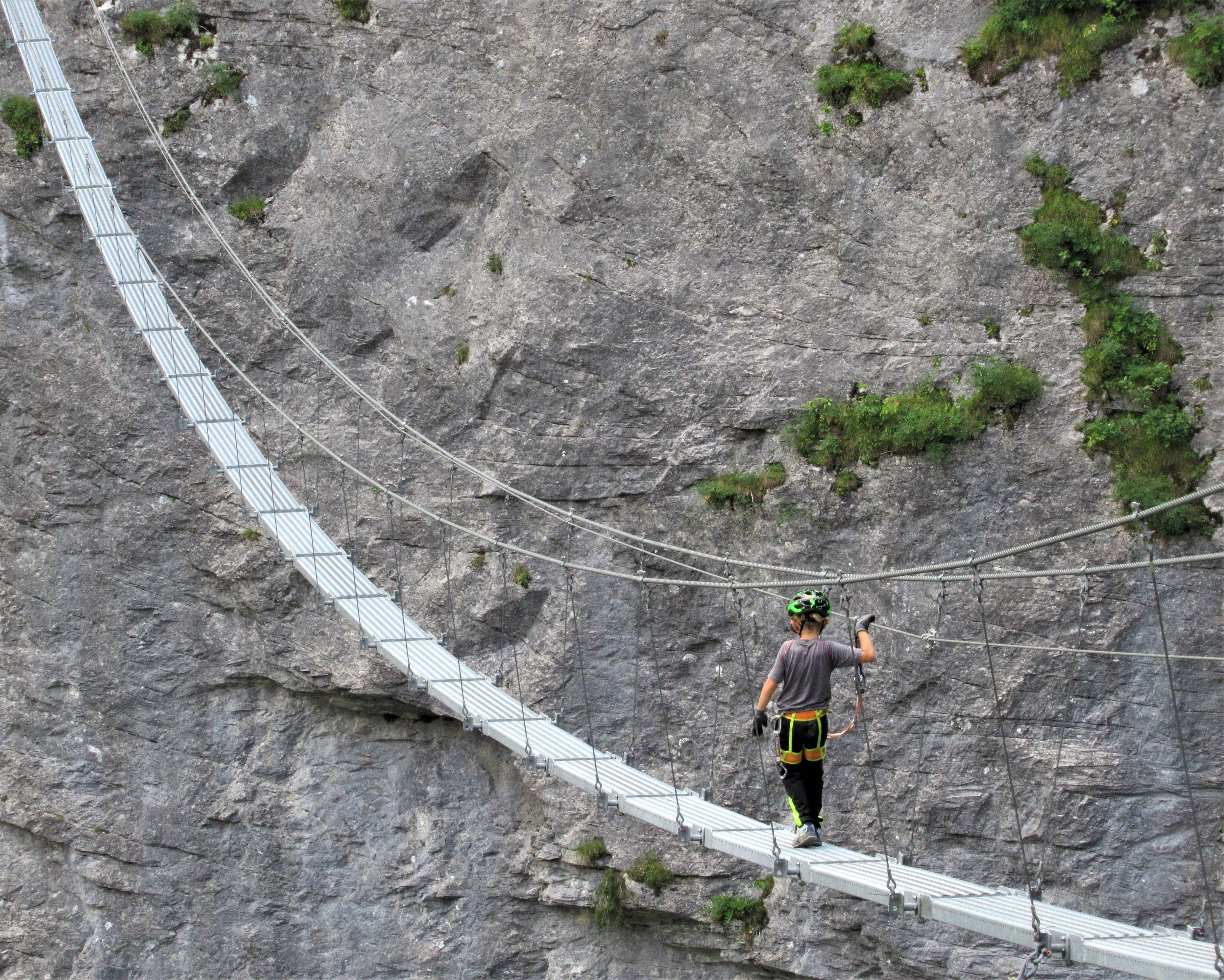 Once on the other side, it’s a brief, steep walk along cow pastures to reach the Gimmelwald Cable Car station, followed by a quick zip back down to the valley. Of all the activities we did on the trip, this is one I would absolutely do again. This should be considered a must do for any capable visitor, no matter how jaded by rock cliffs you may be, and the great news is that it’s super easy to tack-on at the end (or beginning) of a day climbing at the fantastic Gimmelwald cliff. Its possible to rent VF gear in Murren if you don’t have your own, just be sure to save some arm strength for those ladders!

Watch our videos of the Murren VF here: Swiss Sport Climbing Part 1: The Giants
Klettersteig on the Flank of the Eiger