Our selection of harnesses has something to offer for any type of climbing, and any age of climber! Here's a helpful guide to understanding each harness's best uses and standout features to make your selection easier. All-Around Harnesses These…
https://blog.trango.com/wp-content/uploads/2021/06/Harness-Blog_Featured-Image.png 255 325 Trango https://blog.trango.com/wp-content/uploads/2020/02/logo_rev.png Trango2021-06-28 11:17:332021-08-20 11:27:57The Trango Harness Lineup

The holidays are upon us, and you don’t want to end up with a pile of socks and ties again. Chances are somebody is nagging you for a wish list, but you’re too focused on training to put one together. Fear not Rock Prodigies, we have assembled the perfect list of stocking stuffers to help…

This week’s article introduces a new author to our team; Mike’s wife, Janelle Anderson. Janelle has been climbing alongside Mike for 15 years now. She consistently climbs in the 5.12+ range, and occasionally 5.13-, despite often generously sacrificing her goals to give Mike the best chances on his projects. Janelle will be a regular contributor,…

Clay Kennedy and I packed for our second session in the mountains.  A"window" had finally come.

Window has become a joke around these parts....8-20 hours of medium-okay pressure with cold temps and sometimes climbable winds (considering your aspect and tolerance!) 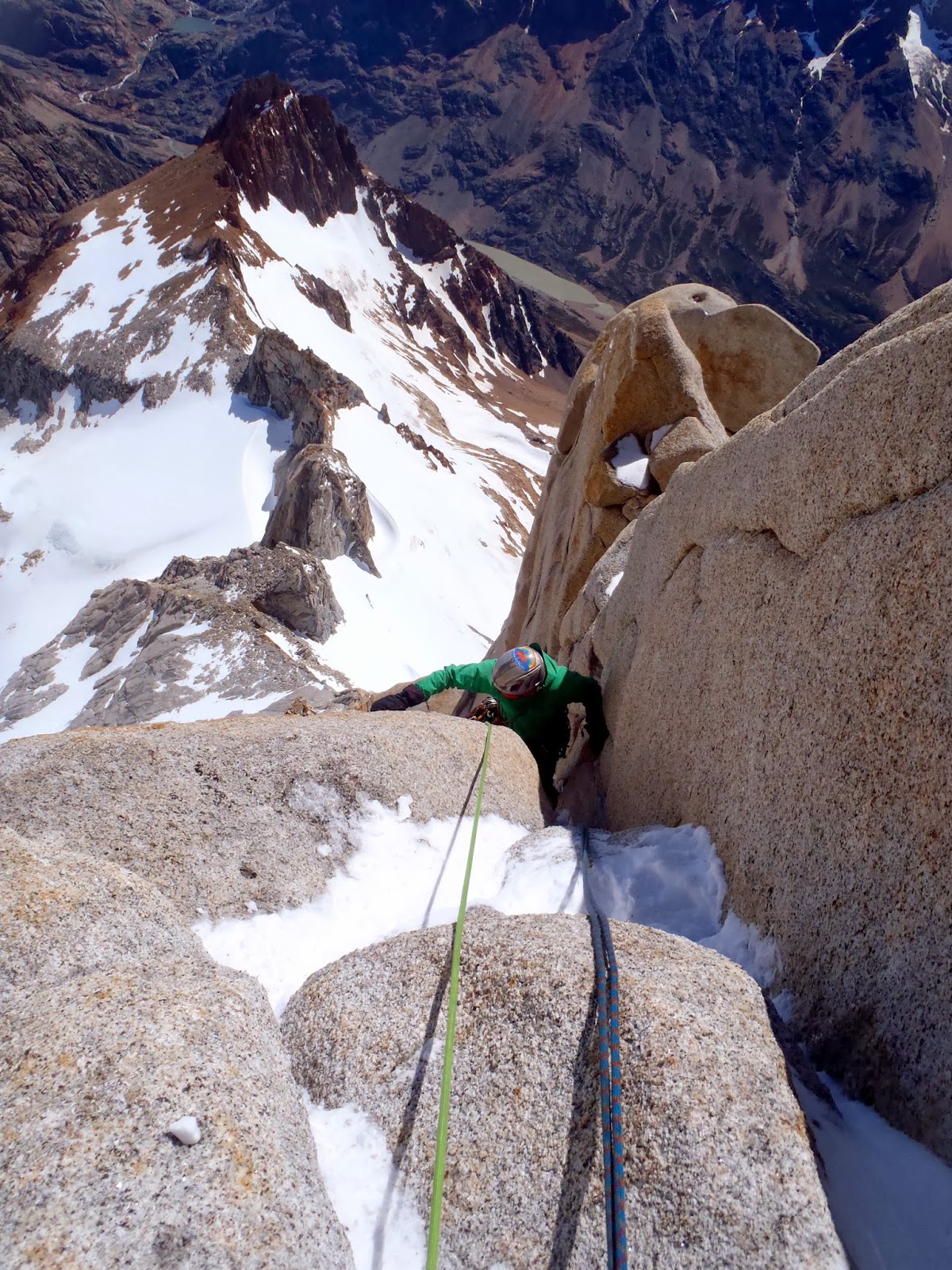 We left ourselves open to the Amy or the Guillo, and decided a little later start would be just fine...minimize the waiting at the base or on route.

With snow fresh we followed a mild set of boot packed tracks up Paso Guillaumet from our camp at Piedra Negra.  The Amy Coullior was free and clear of people.  Crazy...it wasn´t THAT late!

The bergshrund was a 3 foot step up, maybe 2 feet wide.
No problem!
We continued up the snow a little further up, until Clay reached a set of slings and a piton on the right, here we pulled out the rope and simul-climbed to the lip.
The snow ramp leading up to the notch was in dreamy alpine conditions, "one hitter, quitters!" as Clay called it.  A boulder problem exit over iced in blocks mantled us up onto the ridge.
From there, the wind was ever present.  Climbing on the east side was calm and warm.  Climbing on the west side was screaming barfy nuking winds.

I led a pitch to a false summit, first with crampons on, but because it is still a fairly unfamiliar style, I finally took them off and just jammed the snowy crack with my boots.
Thankfully, my belay was protected from the wind.  When Clay arrived, I headed off again, down climbing into another notch.
Here we ran into the first signs of life, a party of 5 from Ecuador and many other voices above and below.
I glanced down the notch to the east, 2 parties of 2 were rappelling.
Around the corner the party of 5 was crawling, fully spread out.

It’s not every day that our family gets to try explore a new climbing area within a day’s drive.  Our original plan for a midweek holiday climbing escape involved local rock at Crowders Mountain.  But when my friend Tonya, (who happens to be 32 weeks pregnant herself), suggested a day trip to a “new” area that’s been getting a fair amount of buzz recently, our ears perked up.  When we saw that it was just under an hour and a half away and that the approach time was literally ZERO, it was music to our preggo ears!  Much more enticing…Read the rest of this entry →
https://blog.trango.com/wp-content/uploads/2020/02/logo_rev.png 0 0 Erica Lineberry https://blog.trango.com/wp-content/uploads/2020/02/logo_rev.png Erica Lineberry2013-12-27 06:17:512013-12-27 06:17:51Holiday Crankin’ at Rocky Face Park – 30 Weeks Pregnant

A lot of folks assume that rock climbing and pregnancy go together about as good as ants and a picnic.  However, with one pregnancy under my belt, and well on my way to completing a second, I can honestly say that climbing can be a healthy and enjoyable prenatal activity.  That being said, just as not all women should attempt to run/bike/yoga during pregnancy, climbing is not for everyone.  But if rock climbing is an activity that you engaged in on a regular basis before becoming pregnant, it’s an activity that is perfectly acceptable to continue for most women.  (Disclaimer:…Read the rest of this entry →
https://blog.trango.com/wp-content/uploads/2020/02/logo_rev.png 0 0 Erica Lineberry https://blog.trango.com/wp-content/uploads/2020/02/logo_rev.png Erica Lineberry2013-12-12 06:15:032013-12-12 06:15:03Rock Climbing and Pregnancy: What Changes to Expect

Some of you may recall a Cragmama facebook post a few weeks ago that mentioned our family being interviewed by our local NBC TV station at our climbing gym, Inner Peaks.  The producer’s idea was to create a hopefully endearing story about how climbing has been a family affair for us – first as a couple, then as a family of 3, and now as a soon-to-be family of 4.   The shoot took a little over an hour on a weekday morning, and entailed us all being interviewed individually (including a chat with C as he was tying in…Read the rest of this entry →
https://blog.trango.com/wp-content/uploads/2020/02/logo_rev.png 0 0 Erica Lineberry https://blog.trango.com/wp-content/uploads/2020/02/logo_rev.png Erica Lineberry2013-12-05 16:30:292013-12-05 16:30:29Our Family’s 15 Minutes of (Local) Fame!
Scroll to top