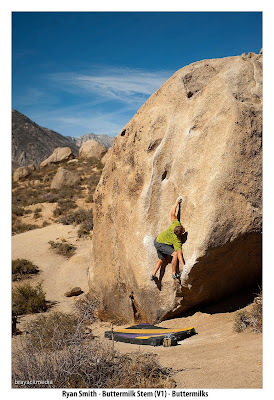 The past few days at BIshop have been pretty good – though i’m kinda getting my butt kicked – and sorta not. I’m repeating just about everything I did last time pretty fast – did “Bowling Pin” at V4 third go. and aparently, the only guidebook said the sit-start was part of the V4 for bowling pin, which I did , but the new guidebook says that holds have broken (though not since I’ve done it) and its a V6…so I did Bowling Pin (V6) last time – making it my first V6 at Bishop…thought it felt hard for a V4! I found really good beta yesterday, too, for the upper crux on Bowling Pin. I love using holds that have no chalk on them and making it easier for myself. It makes me feel like all those years of climbing and bouldering have paid off in experience.

I did Birthday Skyline (V3) which was a new one for me, and repeated Birthday Direct first go (which took me a bunch of goes last time.) – I also did the Hero Roof (V0) which was a total classic!

I got seriously shut down on the Buttermilk Stem (V2)…its just a really physical move that I cannot do (well maybe I’ll be able to do it next time – its totally not-a-climber move to get up into it…) Ryan, being not-a-climber did it fairly quickly (just kidding, it took him a few goes.)

I did a couple burns on High Plains Drifter (V7), but got shut down pretty hard. 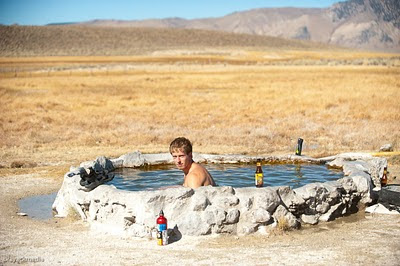 We did the Happys two days ago – I managed to do Solarium first try (I love that one) but still got shut down on Serengeti. Darnit! I put three burns into “Cue Ball” (V4) as well – a problem I had meant to try my last trip but didn’t; that one is at the top of my list now. I like the problem; its hard for me, has long moves between mostly good holds, but with intricate heel-hooks…the crux is a long move off a bad right hand sloper (good feet) to some intermediates, then a jug. I did the move from the stand-start….just a power move off slopers (yummy) 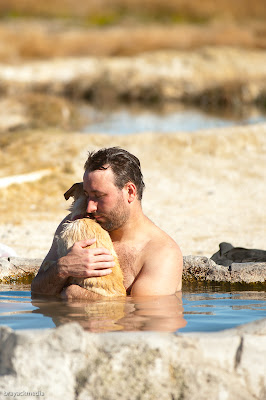 Last night, we frequented the neighboring campsite where the Canadian and Australian girls cooked us a meal fresh from the dumpster at Vons (I’m not kidding)

Today is ANOTHER rest day…that will make two on the trip so far….rest days are so freaking boring.