Visual Written Motion
Its been a pretty hard going spring season here in the east.  The first half of spring was awesome – lots of great climbing days, low humidity and no rain.  But we are paying for it now.  I swear, it has rained almost every day and heavily for the past three weeks, making climbing outside quite unpleasant.  Between rain storms, the humidity has been so oppressive that conditions would just be terrible.
So what do you do?  Well, there area a few options.  Gym climbing aside, when the season turns on you, its good to focus on another aspect of training and health.  Myself, I’ve been running.  Running a lot.  You can run in the rain, and I have been.  I’m tentatively planning on running a half marathon in August.  Not that I really care one way or another about it, its just an excuse to put in some miles (well I run kilometers.)  I got a new Garmin watch.  My old one finally bit the big one…but after using it for 5 years, I didn’t hesitate to get a new one.
Here’s a log from Seneca Rocks: 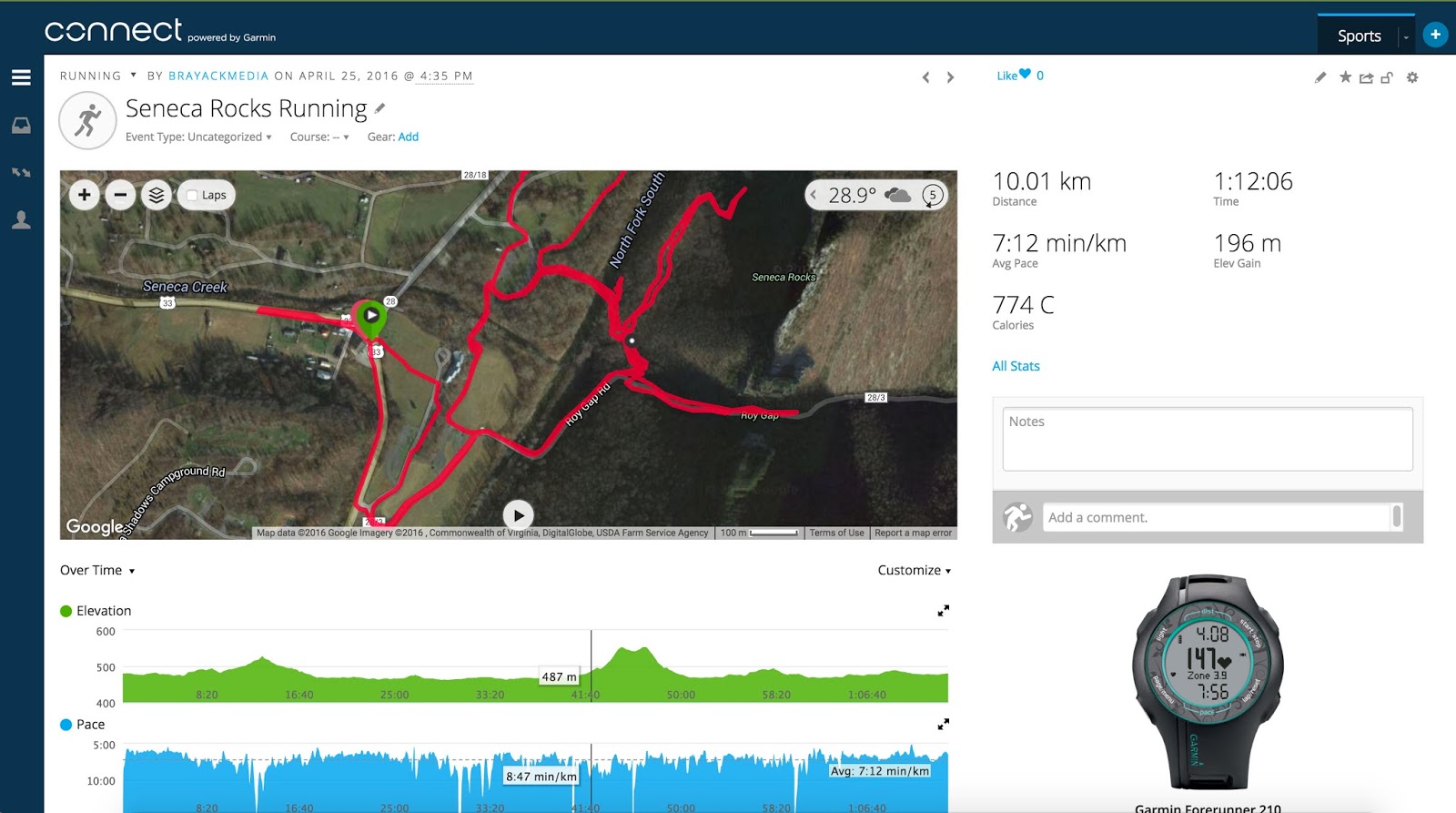 And another from Coopers Rock: 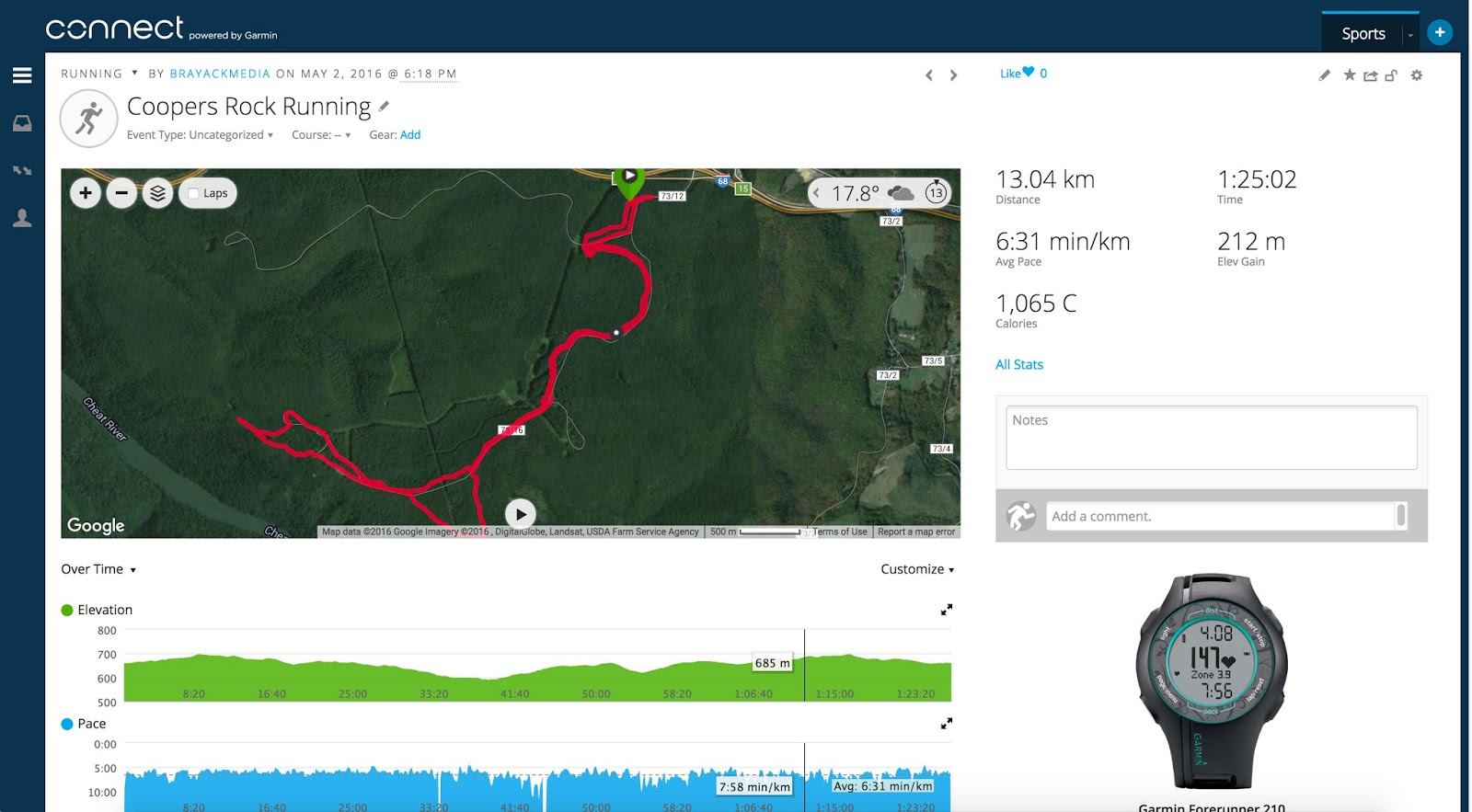 Me personally, though, I’ve been route developing.  I equipped a line at Area 51 at the Meadow River in West Virginia on one rainy spring day (before the current rainy stretch.)  There’s been a lot of debate recently about gear/sport routes and mixed routes.  I’ve never been much of a gear climb climber myself, but I love equipping and sending clean, hard, technical face climbs.  The routes I bolt typically have little enough gear to bolt on, let alone, climb safely on.
Walking down the cliff, I noticed an excellent, blank-looking section of white rock.  Exactly what I look for in a new route.  Though blank-looking from the ground, the rock here in West Virginia typically has enough features to go, albeit in the 5.12 or harder range. 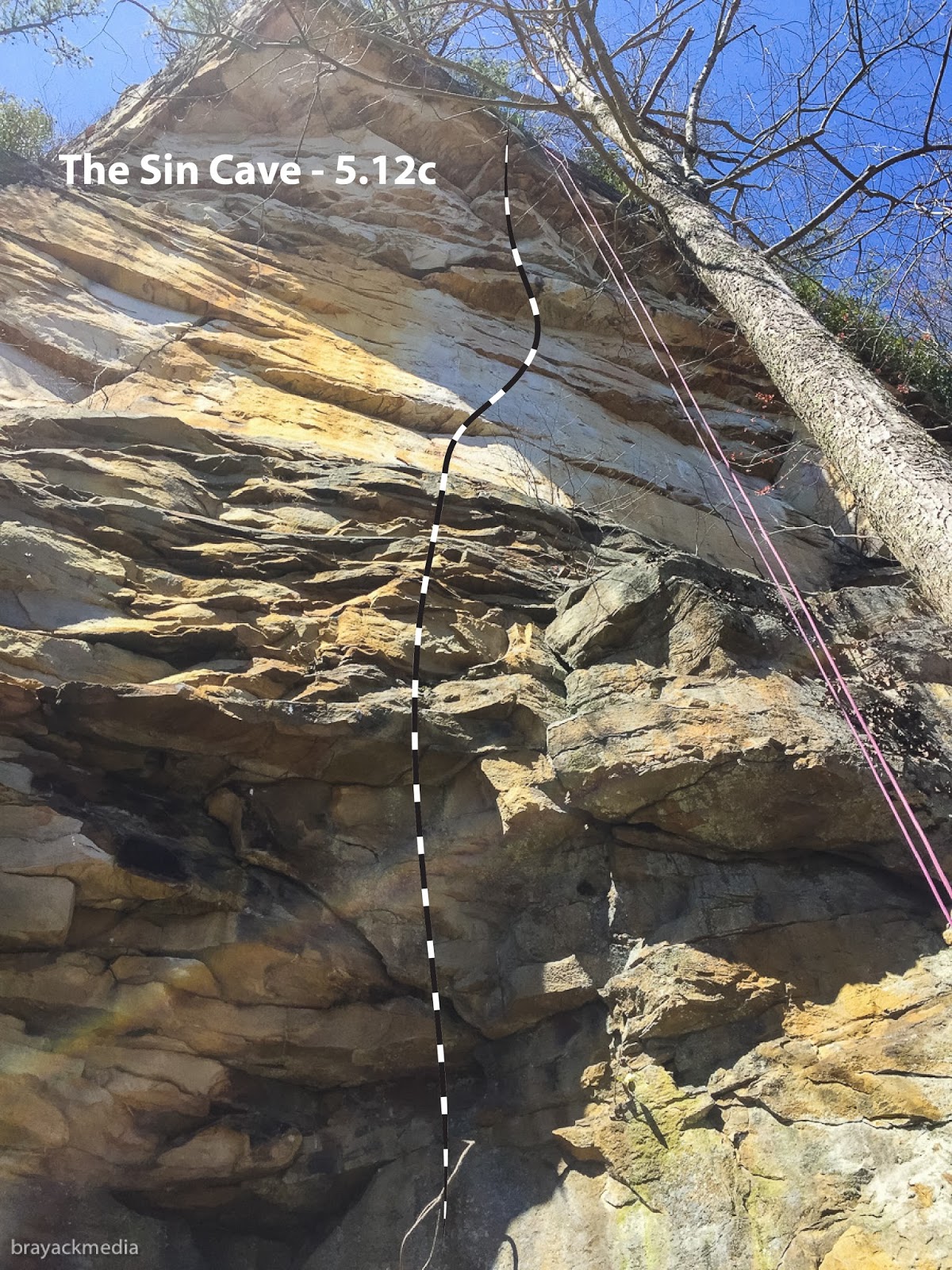 I equipped the route and had some doubts about whether I would be able to do it.  The crux itself was located in the white rock; All the holds seemed to be facing the wrong way, positive, yet small.  It turned out that the crux section comprised of 3 distinct sections.  Two of the three cruxes turned out to just be “really technical” and once I figured out the sequence on them, I was able to do them maybe 2/3 or 3/4 times off the hang.  The third crux, however alluded me the day that I equipped the route.  I just simply couldn’t figure out how to do the moves!  Nor be able to brute strength my way through it.
I knew I was pretty beat up though.  Equipping the route itself takes as much out of me as would climbing half a dozen routes.  Bolting routes is hard work!
I came back the following weekend.  It felt like it was going to be the last good spring day so the pressure was on to send the route. I warmed up by going bolt-to-bolt up the route and was able to do the first two cruxes fairly easily off the hang, and I spent a good 20 minutes working the third crux.  I just linked two draws together and clipped directly into the bolt so my belayer could just chill and not pay attention.
The sequence was really balancy and technical; the feet were mostly good.  However, no matter hard I tried, I couldn’t find a static way to finish the crux – a move to a ¼ pad crimper.  I finally gave up trying to climb static and settled on the plan:
A right hand gaston on a good hold, an ok right foot.  The sketching part – standing up on a terrible, off-kilter left foot smear and a precision dead-point (more like a jump) to the ¼ pad crimper.  I was able to do that move 1/10 times off the hang…actually…I tried it about 15 times, got it once and kind of half got it once.  Not very good odds….
I took a long rest, waited for the route to go into the shade, then tied in for what I thought would be a long shot attempt.  I even tied a project tag on the first bolt as I climbed up it.
I managed to make it through the first two cruxes fairly easily (Oh….boy…really put the pressure on myself.)  I was so surprised to even be at the crux on red-point…. poised to set-up for the crux, got into it and got to the point of the jump…amazed I was even there…..  I looked at the hold…focused all my attention down to that pin-point moment…..and was like…please get it, please get it, please get it….My heart was fluttering and I was really nervous, almost shaking.  I really had to focus to not shake myself off….. I put my trust into my left Tenaya Iati.   It held and I went hard for the crimp, sticking it perfect…oh so perfectly….I screamed of course, but it was my “I know I got it, but TRY HARD.”  I did. I matched, and then did several more moves to a good jug.  Boom!  I figured it would be exciting to have a bit of a run-out on 5.12- climbing after sticking the crux jump…well…I usually curse myself for that sort of thing, but this go it went no problem.  The final roof pull was a little difficult from what I remember but I just tried as hard as I could and did it fairly easily.
The grade on this route was pretty hard for me to determine.  I would previously just have called it 13a or maybe 12d, but a recent discussion among locals here at the NRG has me starting to question route grades.  I don’t want to be soft, so I figured I’d just say 12c and call it good.  How do you grade something that you feel like is impossible for you?  I still can’t believe I got so lucky as to send that route. Everything went right.  I feel like my MAX is like 12c or 12d (V5 or V6.)  But how much should I include luck?  The first boulder problem, the odds were 2/3, the second 3/4, the third 1.5/15.  I just always feel like I get lucky on stuff like that…
I equipped another route at Cotton Top on a rainy Friday morning.  This route is short, but climbs up this really neat arête feature.  Coming down the route, I wasn’t sure if I was going to equip it, but once I saw the features, I knew I was going to love it!  The route starts with an easy/broken start (ledge) but immediately fires out a body length roof (pretty easy.)  A really tough power move establishes the climber on the left side of this really pointy arête.   There are so so to OK holds on arête (right hand), but there is hardly anything on the slab for the left and and very little holds to pull down on.  After the big power more, the route does maybe half a dozen really balancy and techy, core intensive high-step and body position moves.  I was able to climb this one second go with the help from my friend Ryan who told me that he was going to take me off belay if I fell (just kidding, he gave me great beta!)  I decided to call this one “Two Girls, One Tomahawk” 5.12a (or b?) 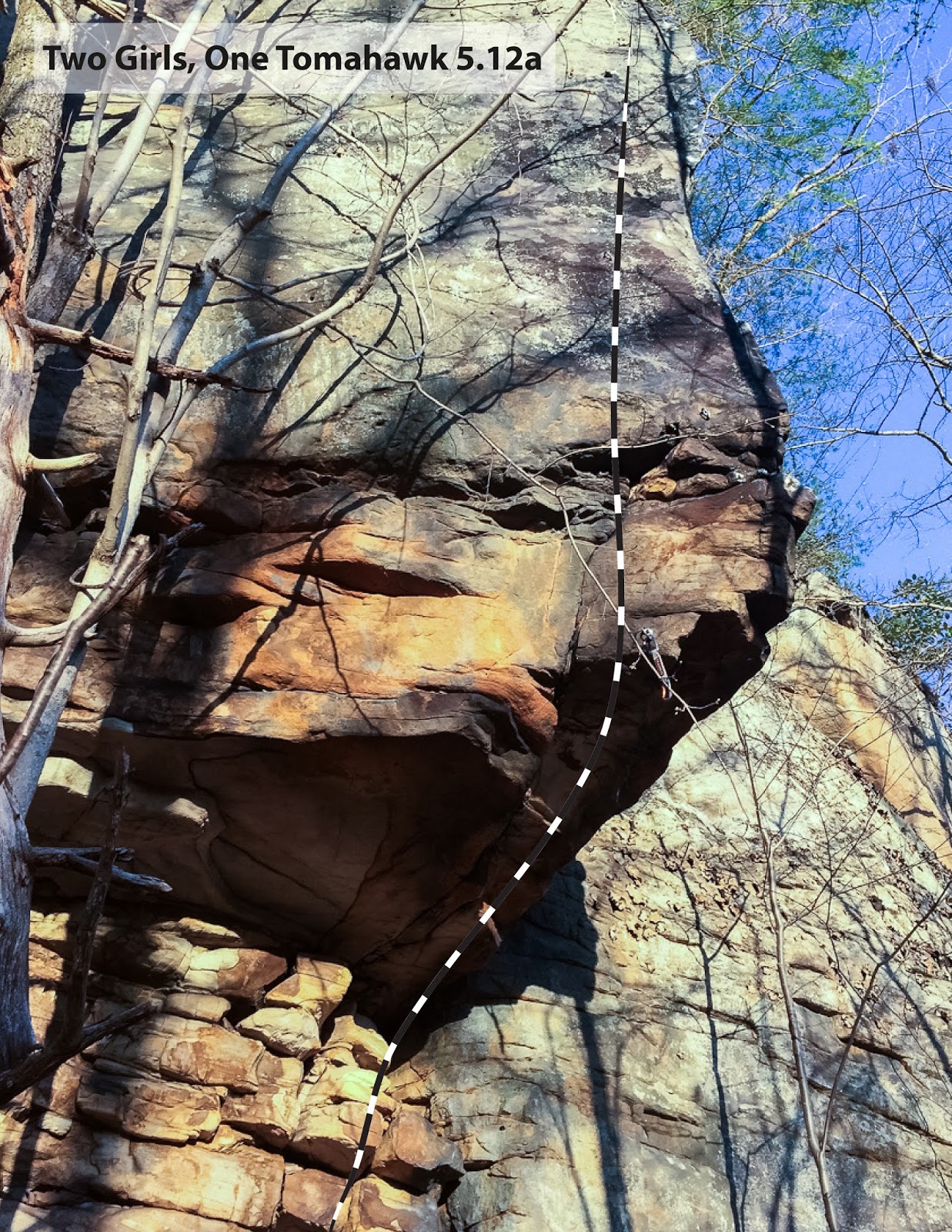 It looks like another week of rain here in West Virginia….So running, gym climbing and route developing.  Life is hard.