Two in the afternoon, and I’m shaking uncontrollably.  One second I’m freezing, the next I’m burning up.  It hurts to move, to breathe, to blink my eyes!  I reach for the phone, and call for life support.  Uncle Stu, in his warm apartment in Bishop picks up the phone.

“Stu,” I meekly say, “The flu has me in a death lock.  Can you get me some Gatorade and chicken soup?”

Sitting in the campground, all alone in my van, the big year has come to a screeching halt.

I think to myself: What am I doing with my life?  I don’t have a job, I don’t have a girlfriend. Climbing feels like a chore.  Gosh, this is the unromantic and difficult part of the big year.

March slowly passes into April, and before I know it, I am about to leave for Alaska to tackle my next big alpine objective.  Just prior to departure, I manage to completely and totally throw my back out traversing an undercling pitch. Laying on the ground and writhing in pain, I wonder how I will manage to recover in time. I’m supposed to be landing on the glacier in a weeks time!

Days later, with the help of some muscle relaxers, I manage to pack my bags and hobble onto the Alaska bound aircraft.  To my good fortune, a storm is ravaging the Alaska range.  My partner Alik and I hole up with my good buddy Mad Dog in Anchorage for seven days while the storm settles and my back mends.

As we crest one of the final hills en-route to Talkeetna, we can see the entirety of the Alaska Range.  Suddenly, like a strike of lightning, my stoke is rekindled!  As we pull into town, you can feel the excitement in the air.  Climbers from around the world have come to test themselves on Denali and neighboring peaks.  We fill up on coffee and a lumberack’s breakfast at the Road House Cafe and waddle over to Talkeetna Air Taxi to manifest ourselves. 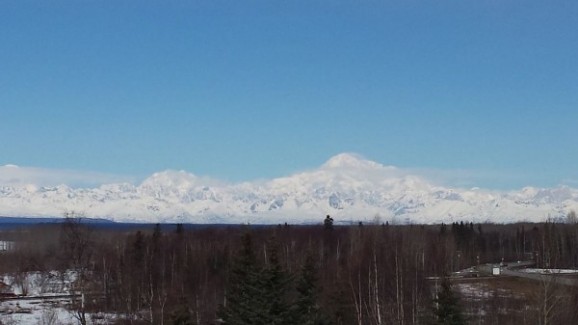 We land on the Buckskin Glacier, at the foot of the massive and incredibly imposing East Face of the Moose’s Tooth.  With 5,000 feet of vertical relief, we are left staring in awe and admiration.  Alik, in his always calm and casual demeanor, comments.  “Looks good.”  I take a gulp, try to act cool, and respond: “Yup, sure does.” 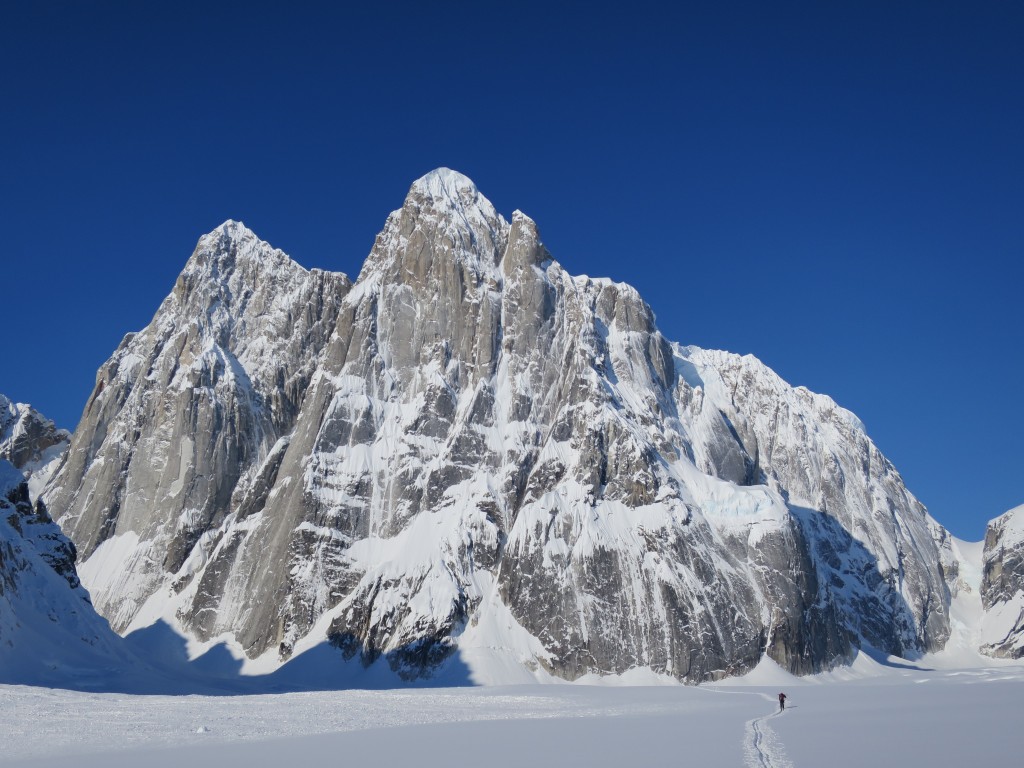 The next morning, drinking my coffee in the Alaska sunshine I have to turn and face away from the Moose’s Tooth.  My stomach is doing somersaults and I’m nauseous with uncertainty and fear.  Alpine climbing at its best.

Our eyes are set on a new route:  2,500 feet of snow, rock and ice, leading to a 1,200 foot rock headwall, sequining to another 1,500 feet of snow and ice to the summit.  We hope the rock will go free at a reasonable dry tooling grade.  Our first attempt proves solid, but we are thwarted by heavy snowfall and forced to retreat in a gully of torrential spin drift and powder avalanches.  Character building at its best. 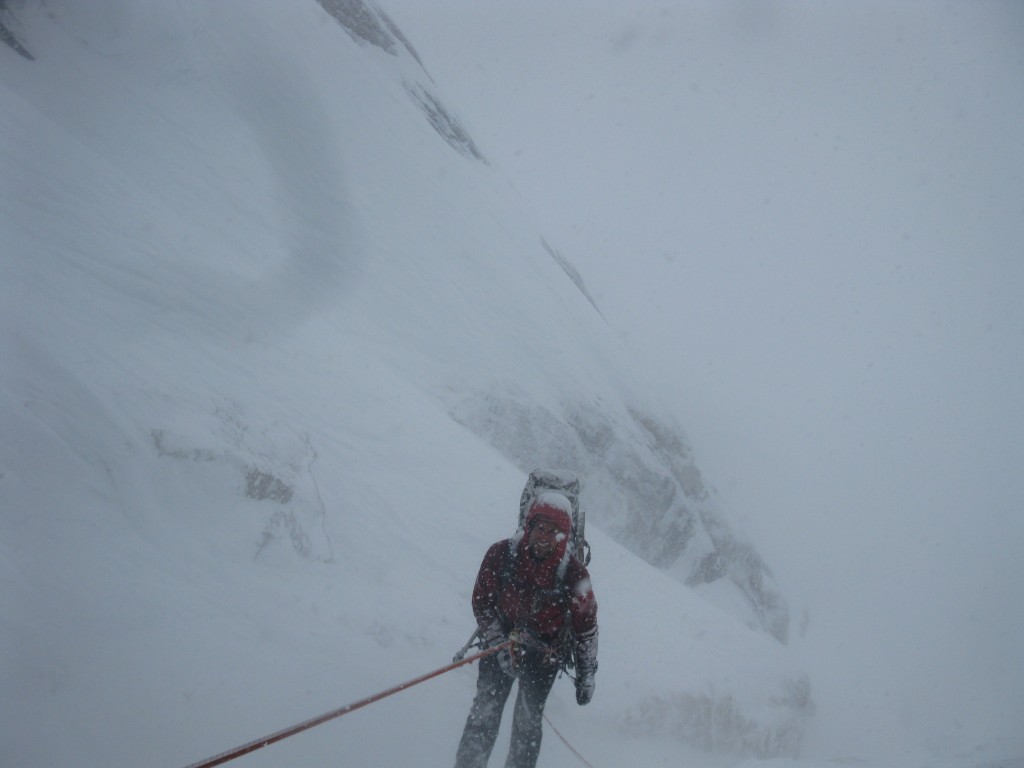 Retreat from the storm

Once back in camp, we make a few satellite phone calls to family, gorge ourselves on steaks, chicken, and bulky carbs, and patiently wait for the weather to clear.  As luck would have it no more than 48 hours after returning to camp we get the all clear.  Back up the mountain we go, fatigue still deep in our legs.

The first two days go well, and we are established half way up the face.  The morning of the third day onward melt into a blurry haze.  Alik and I push ourselves far into our reserves.  We opt to employ El Capitan speed climbing tactics to the headwall.  The leader short fixes climbing in blocks, while the second jumars.  Eighteen hours later, exhausted and with no good bivy platform in sight we employ our bat hammocks.  They prove almost non useable, I am too cold to sleep, after two hours we opt to continue.  Looking out across the Alaska horizon in the near 24 hours of light, I feel as if I could be high on a Himalayan face. 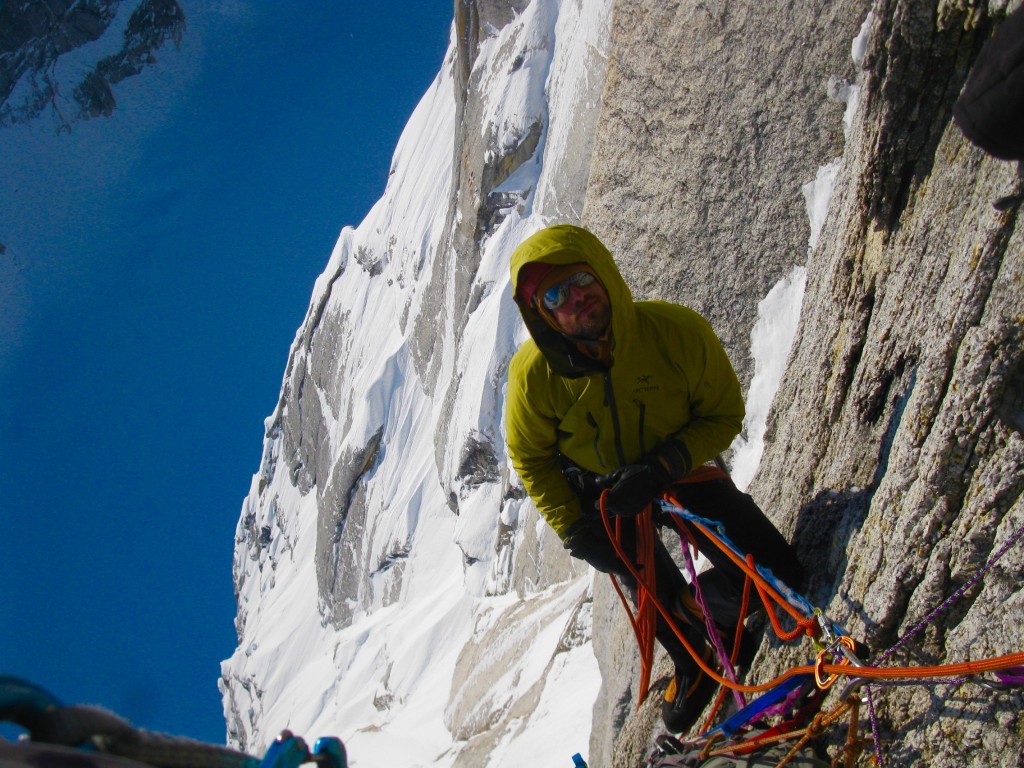 Alik taking in the view, 3rd pitch on the headwall

The climbing is loose, sharp and tedious at a grade of 5.9, A4.  Topping out the headwall in light snow flurries at 4 pm, we push onwards through 1,500 feet of fantastic moderate snow, ice, and rock to the summit plateau in a 48 hour push!  We take in the view, snap a few pics, and relish in the moment – but our peace is short-lived.  Worried about a encroaching storm, we’re determined to keep moving, and thus begin the 32 hour decent back down to the valley floor.  Sometime on the third day, I drop my ATC and am forced to finish the rappel with a carabiner brake rack!  Our timing is perfect. Snow began to fall the second we touched flat ground.

Arriving back in back in base camp, we had been on the move for 80 hours.  Sipping hot toddies and frying up some meat and pasta, Alik and I savored finally being at rest.  Endorphins, exhaustion and sleep deprivation had us feeling incredible, but also talking gibberish to each other.  I’m sure we looked like drunken fools!  Some time later, we realized that we had both been hallucinating the squawking of ravens for much of the route.  Hence a route name was born:  Illusions of the Raven. (Read the full story here: http://www.alpinist.com/doc/web15s/newswire-new-route-on-east-face-mooses-tooth)

Upon my return to civilization I felt like I had endured the Spartan battle of 300.  I was totally and complete wasted.  For two weeks I holed up, slept, ate and kept good company with friends.  It would take months to recover mentally from this effort.  The mountain had required much more of me than expected. The Moose’s Tooth had given Alik and I an experience of a lifetime – an opportunity to look far inside ourselves.  Adventures of this magnitude settle deep into one’s inner core and radiate out.  Reflecting back now, I find that I have been sculpted by my most challenging experiences.

Coming back from this adventure, I often think of what Ammon McNeely, says:  “There is a fine line between bad ass, and dumb ass!”  In my mind, the line is there for us to creep up to.  It feels incredible to get close to it, but it’s up to each one of us to decide how far under (or over) the line to go.  The freedom to explore these boundaries is intoxicating and exhilarating, but also humbling when things go wrong.

Weeks after Alaska, I hobbled back into Yosemite Valley.  A good friend of mine (and current women’s El Cap Nose speed record holder), Libby Sauter, suggested we climb the classic East Buttress of El Cap.  Chatting like song birds and swinging from holds like monkeys, we simul-climb the route with smiles and an extra helping of laughs!  But as fate would have it, this climb would be the straw that broke the camels back or, in this case, my back!  I had eked out the Moose’s Tooth, but now I was paying the heavy price and my back was injured.  I sat in the cafeteria at the Yosemite Lodge, grimacing in pain, angry that I was showing weakness, depressed that I needed to rest. 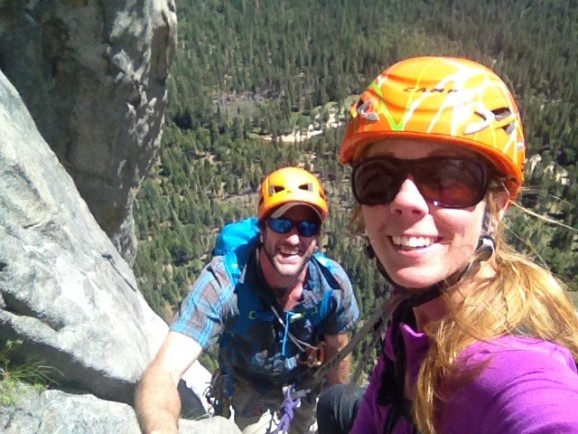 Enjoying a great day out on El Cap with Libby Sauter

I opted to try new things and relax.  Whale watching, hiking, cycling, sea kayaking.  I started physical therapy and tried to mend.  Six weeks came and went, and still no relief.  Instead of setting up a tent in the Dolomites and pushing my rock grades, I rented a room in Bishop from a good friend and focused on PT, lots of cycling, and top rope climbing.  Instead of climbing El Cap in a day or linking high Sierra peaks to prepare for my upcoming expedition to Nepal, I was doing mini traxion laps in the Gorge.  I found if I climbed with perfect upright form like a stiff robot, it didn’t hurt.  This is not how the big year is supposed to go, I thought.  But in life things do not always go to plan.  Sometimes we are served up a plate of humble pie.  I remained optimistic.  The months passed, the MRI came back negative, and slowly I regained form.