Man!  What a weekend.  I started mine early.  The weather forecast for last friday was percent, then decreasingly bad.  They got the rain part right, but it didn’t rain until well into the day Saturday which was perfect!!

I bought a canoe Friday morning at Cabelas and promptly strapped the thing to the top of the car, and drove to Plum Orchard lake.  A moderately sized man-made lake about 30 minutes south of Fayetteville (NRG.)  The plan was to fish in the morning until my buddy Joe, a school teacher, got off work then we were going to head to Beauty Mountain.  Well, the water is still too cold for Bass (despite what Matt Stark may say and catch) so I didn’t catch anything, but had a great time paddling around on the lake!

I met Joe and we headed to Beauty.  Conditions were just perfect.  Cool (chilly) but sunny…about as good as it gets.  My major target for the day was “Gun Club” 5.12c. 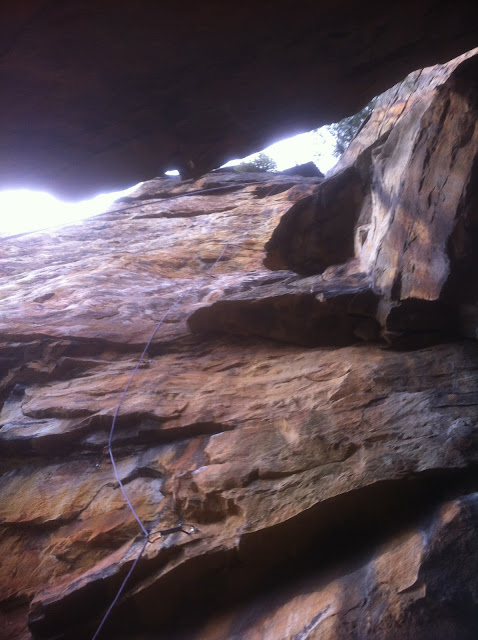 This ?100 foot route is a pretty serious pitch.  Lots of HARD climbing and some serious run-outs.  Established by Brooke Sandahl in 1989, this slabby to gentle overhanging pitch starts with 4 bolts of easy climbing (maybe 10+) then you get right into the business.  The well-defined crux centers around terrible feet, a so-so high right pinch, a minuscule edge and a desperate high right high-step.  I know, I said high twice there, but its a REALLY high right high-step.  You get a good to decent rest after this, the immediately launch into 3 more bolts (and a piece of gear for good measured) of 12- climbing – 3 hard boulder problems separated by rests.

The first is some techy, out of balance sidepull moves culminating with a deadpoint (or high reach/lockoff) to a jug.  You wish there was a bolt here, but the next boulder problem is techy and powerful 11+ climbing to a so-so clip.  1/4 pad crimpers but good feet.  I actually get a piece of gear in the middle of this once, since it would be a 40+ foot fall if you came off at the next clip..onto slab.  Kind of ugly.  Make sure you bring a Yellow C3 or equivalent.  Of the three post crux cruxes, I felt the most confident on this one – I’m able to use my tall guy arms couple with my short gun legs to get a good right undercling and uber high feet to reach the first 1/4 pad crimper then clip.

The third boulder problem is the one that I worried most about.  Its a series of small but positive knobs leading to a “GO FOR IT BAHHH!” move to a right gaston with a pinch.  The feet here are pretty bad and though I tried many other sequences, my best beta ended up being a full extension dead-point to this right gaston with a decent pinch.  From here, you’re staring right at the bolt, and with a full extension leg, need to do a few baby smears to get your left foot on the first good knob then you’re in a full – on chicken wing to clip.  Yeah…chicken wing to clip…Sucks right?  I called slack a good 3 seconds before I even thought about pulling up rope…getting shorted on that one would be a game ender.  Anyways…get that one clipped and its another move of 11d (easy, though you gotta dead point again off two 1/2 pad incuts but good feet) to a jug.

From here, there’s a really run-out section of mid range 5.10 to a full “stand there as long as you want” rest.  The rest of the route climbs maybe ohhhh. 40 feet with two bolts.  Its runout and not all the holds are good, but there’s enough of them that you’d in like flin.

After sending that route, I was super stoked…and just kinda ran around at the crag all psyched and talking like a 15 year old high school dude after his first date with his 11th grader girlfriend.