This time of year in the Southeast, planning weekend climbing trips can be a bit of a gamble when it comes to the weather.  It’s especially hard when a too-long-for-a-day-trip destination looks perfect one day, and sketchy the next.  We all had our hearts set on a round 2 at Hidden Valley, VA this past weekend, but while Saturday looked splitter, Sunday looked, well, pretty wet.  However, we’d heard from multiple people about how the bad weather often “hops” right over the mountain, even when surrounding areas are soaked.  That combined with numerous rainy day route recommendations from the new guidebook was good enough for us – and our gamble totally paid off!

CragDaddy with his belay game on point while the kiddos play in the background.

Not only was day 1 just as gorgeous as forecasted, but it was an above average performance day for the whole crew.  After a quick warm-up on Powder 10d, we decided to make the long trek to the Falcon Wall, which the guidebook touted as the best technical face climbing in the Valley.  We were not disappointed!  Our first route there was Fledgling 12b, a stellar line with a thin crux up high, and a somewhat cryptic finish.  Perhaps a little soft (we all agreed Flavored with Meat 12a from a few weeks ago was substantially harder), but super fun nevertheless.  It was my turn to hang draws, and I was really close on the onsight, but botched it at the last bolt when I missed a hidden foot.  The CragDaddy scored his first 12b flash, fellow Cragmama Rebekah nabbed her first 5.12 send on her second go, and I sent second go as well.  Yay team!

Next on our list was DDT 12b, another area classic.  Definitely a step up from Fledgling; this route was NOT soft, and featured movement that was very sustained, technical and bouldery.  The crux beta was pretty intricate, and included a pretty tenuous clip, but after figuring out the beta on my first go, and rehearsing the harder moves again when I was lowering off, it felt pretty doable.  I sent second go, woo-hoo!  First time in a looong time I’ve nabbed two 5.12’s in a single day. 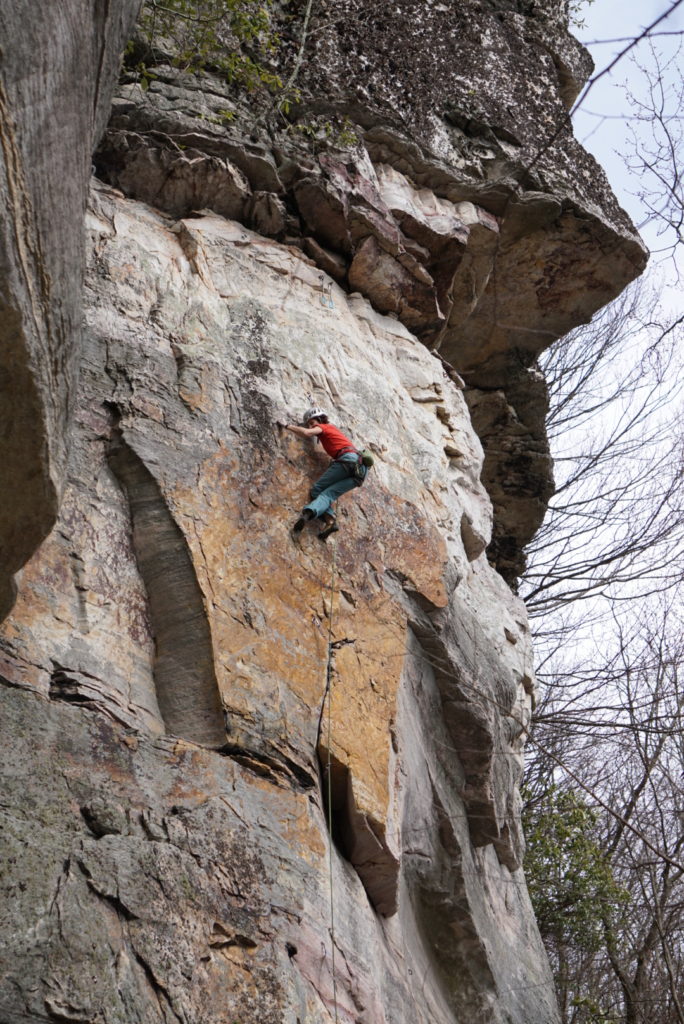 Fancy footwork on DDT 12b

Next day we fought some drizzle in the morning, a random 3 minute monsoon in the afternoon, as well as our extra partner needing to leave early due to illness.  With all that said, however, we managed to make it a pretty good day.  It was the CragDaddy’s turn to hang draws, and he spoonfed me beta for a flash on “Never Seen a Man Beat the Snake Before” 12b.  Fun route, though not nearly as classic as the lines on the Falcon Wall.  Perhaps a little soft as well, but definitely worth doing if you are climbing in the Snake Garden area. 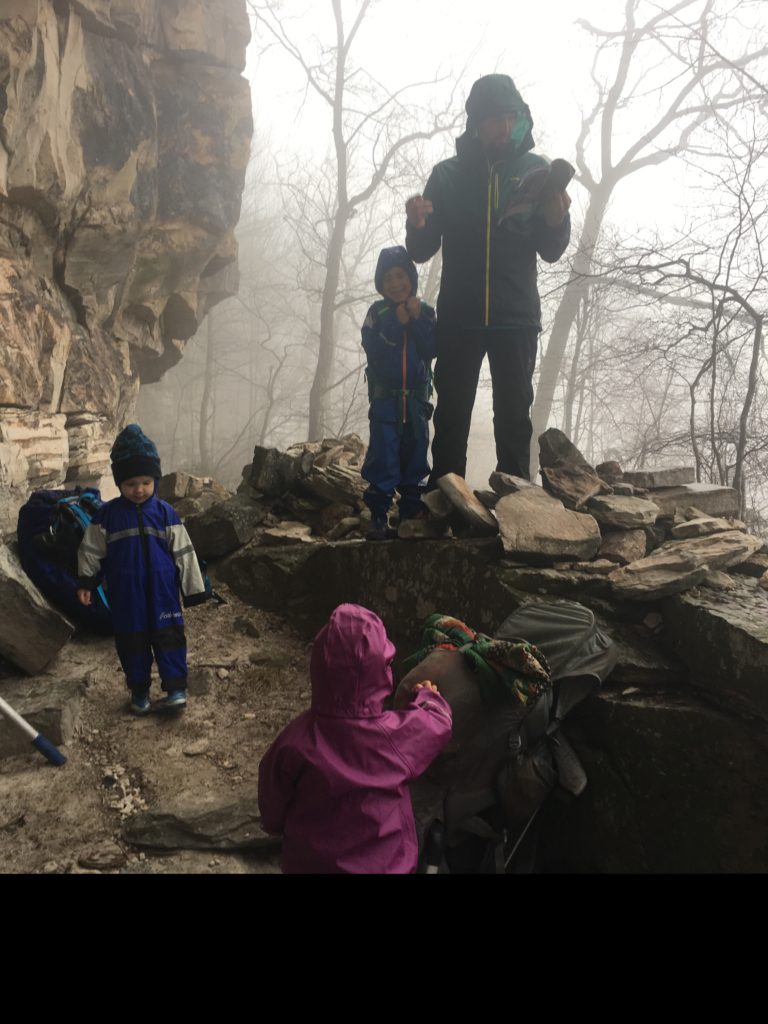 First moments at the crag Sunday morning…(thanks for the rainsuits Biddle and Bop!)

Our day ended rather abruptly when I had to bail on the Meat Wall during the freakish rain storm.  We hiked out a little earlier than normal, but super psyched on spring climbing season.  Looking forward to spending more time in Hidden Valley this spring, as well as a…wait for it…KID-FREE weekend at the New for a belated anniversary celebration.  (Please, please do an anti-rain dance in a couple of weeks for us if you get a chance…)  Til then, where did everyone else adventure this past weekend? 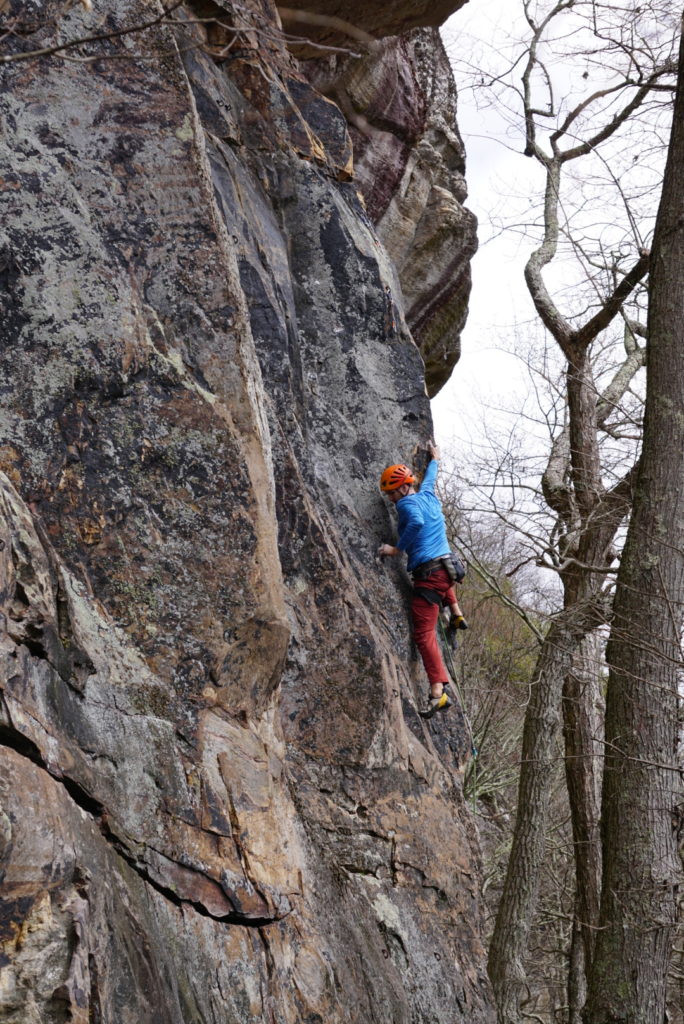 …and an hour later, here’s CragDaddy sending “Never Seen a Man Beat the Snake Before” (Photo creds to Eric from TRC, didn’t catch his last name!)