Finger strength is the single best thing to train to be a better Rock Climber.  There are almost ALWAYS small holds in crux sequences.  It is what makes climbing so hard…grabbing those terrible little holds.
Much empirical and some actual studies strongly suggest that hangboard training significantly increases a climber’s abilities to hold smaller holds (trust me it works.)

The hangboard evolution has come a long way.  I remember the earlier boards being different versions and adaptations of medieval torture devices.  With the large climbing hold revolution in the 90s and 2000s, hold and subsequently hangboard designs were artistic rather than functional.  The point was to “look good” while hanging from your doorframe.

Most folks who bought hangboards would do pull-ups from them now and then and maybe challenged their drinking buddies to see who could hang from the smallest hold.  This was a bad time in the life of hangboards.  Sure, they looked good, but their functionality suffered.  Those who dedicated themselves to actual hangboard workouts still either took the pain or modified the available boards – sanding down some of the texture, reshaping the most usable grips and cutting their boards in half.  Because of poor hold layout, most of the holds on the boards were useless anyways.  Each board really had only 2 or maybe 3 (if you’re lucky) usable holds.  For the other holds, the hangboard got in the way.

The steadily growing training revolution took a large upswing in 2013-14 with the release of the Anderson brother’s Rock Climbing Training Manual and Trango’s Rock Prodigy Training Center (the street name seems to have settled on ‘The Trango Board.’)  This board seriously revolutionized the hangboard, taking all of the benefits of the various boards on the market and addressed the drawbacks.   The board is awesome and a good all-around board for training.  I used the board for 5 hangboard cycles but started maxing out the smallest two finger pockets.  I consider adding more than 30 lbs to a hold to be “maxing it out.”  I was starting to wonder what I was going to do – maybe just consider pockets my “strength” and focus more on crimps?

Then I heard that Trango was developing a new board.  Voila.  The Rock Prodigy Forge.  I haven’t had a chance to train on the new board; my next hangboard won’t start until this February some time, but just from feeling out the holds and doing some test hanging, I immediately realized that this was this board is seriously awesome and has smaller and more difficult holds for me to train.  The texture is finer too.   Further, I noticed that the pockets are sloped (drafted)!  I really can’t wait to start training on this thing!

The revolutionary step is the ability to train the closed crimp.  In their training book, the Andersons present scientific evidence that supports the theory that grip angle matters. For example, if you train open grip (120 degrees), this does not necessarily translate to a closed grip (90 degrees.)  Only a madman would attempt to close crimp while hangboarding (injury issues) but the Forge Board uses a dedicated thumb support so you can effectively and safely train the closed grip position!  Total genius….and that’s why I love Trango. 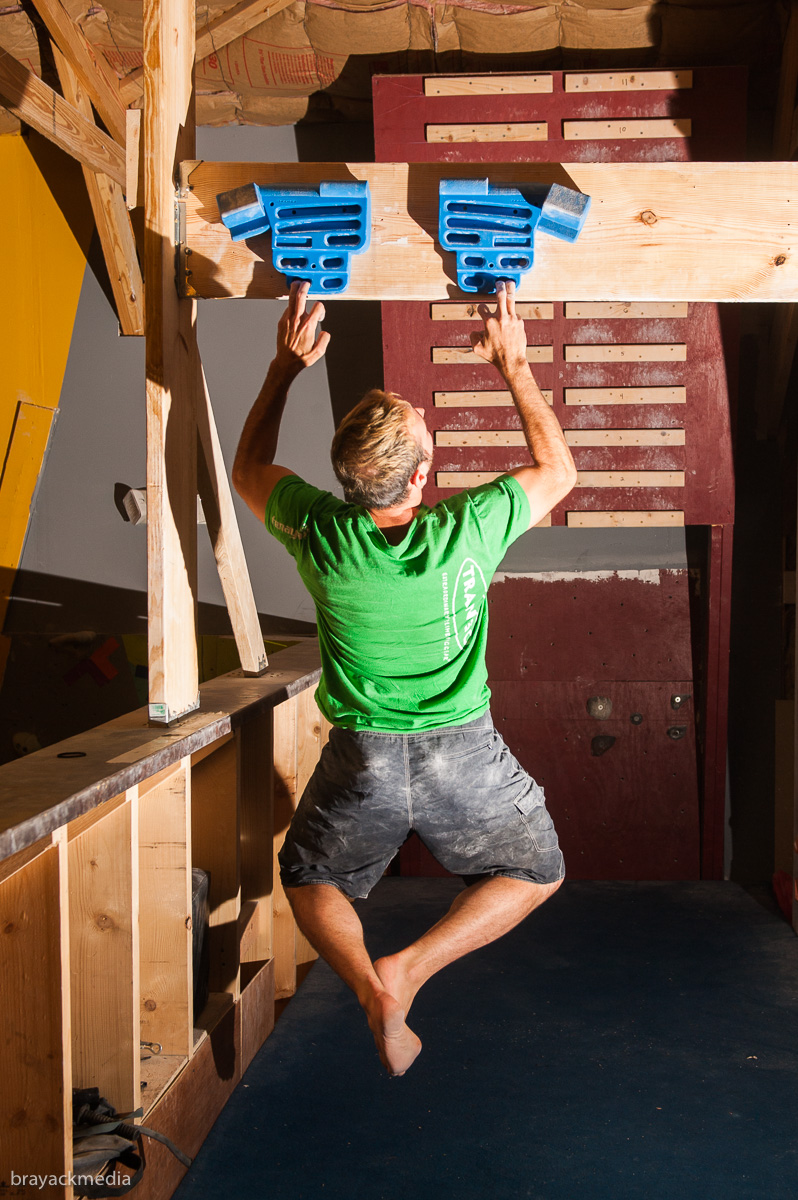