Last weekend, there being snow at rocktown, I decided to drive up to Cleveland to hit the rock gym there. Its about the 2nd or 3rd closes gym to me here in WV – though we’re getting a gym here in Charleston VERY soon!!!

When I was in High School – probably the mid to late 90s, I did one trip to the Cleveland Rock Gym (CRG) – it was a cool gym, good training walls for bouldering, LOADS of top rope climbing (that doesn’t interest me in the least.) 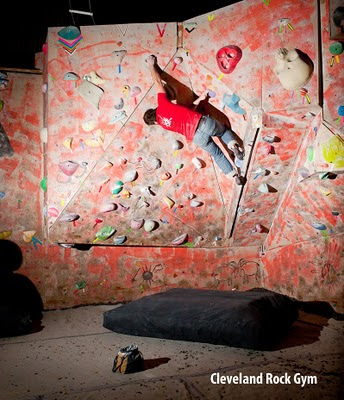 It was pretty much the same rad gym as I remembered it! The place was big enough that all the screaming kids didn’t really make a difference (they were mostly in the top roping range while a few brave kids came to play on the big kids wall and were pretty cool.) The problems were quite good, powerful, but varied. Open jigs was nice, which allowed for different styles/approaches to problems (I could just beast my way through some of them mrow!) – They run a good show there. The only weird thing is that they require one to belay with an ATC (after paying my $2, I passed an ATC – using one for the first time..since well…the mid 90s!) All and all, its a very worth gym which I think, was worth the four hour drive for me (assuming that rocktown and HP40 were under snow.)
Sunday, we did Kinetic Gym in Columbus. Kinetic is much smaller, but has that “hometown” feeling. At Kinetic, you’re climbing WITH everyone, instead of around them. It has a nice community feel to it. The walls at Kinetic are STEEEEEEP! And what Kinetic really has going for it is all the awesome jugs and holds that are NEW and/or well maintained. Problems are thought out, but powerful (which lends itself to my style of climbing.) The “Mothership”, their (in my opinion) premier wall is ?72 degrees, which is about the same as the madness cave at the red (?I think?). Totally an excellent gym! 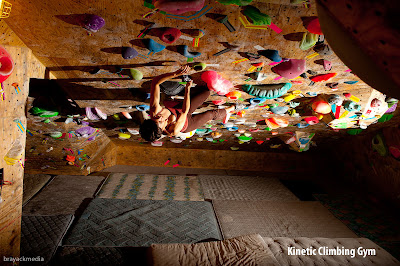 Note this photo was from a trip about a ?month ago, not this weekend.