My family and I are heading to France (with a few days in Italy) at the end of the month for spring break. I spend the vast majority of my outdoor climbing days working redpoint projects, but on this trip I expect to focus on climbing routes first go, so I’ve spent the past few weeks tuning up my fitness accordingly and practicing on-sighting. All the crags on our itinerary are limestone, so we made a point to visit Shelf Road to climb on similar stone (albeit of much, much lower quality–or so I hope).

Earlier in the winter I bolted 4 routes (and a linkup) on a nice cream-colored panel of rock in the “Tropical Wall” sector of Shelf’s North Gym, which offered the perfect objective. Granted, these would not technically be on-sight attempts since I had rapped all the routes while bolting them. However, I don’t really possess the capacity to remember the details of four random lines I bolted a few months ago, since all my memory banks are filled to the brim with song lyrics and movie quotes. So I expected it to provide good practice nonetheless.

The main feature on the wall is a 3-feet-deep roof about halfway up. Four of the five lines involve this obstacle in some way. The first line I tried (“Booty Sweat”) follows a fairly continuous crack system that skirts the left side of the roof with powerful underclings (for the grade). While basically a crack climb, there are a lot of nice pockets sprinkled around to spice things up. 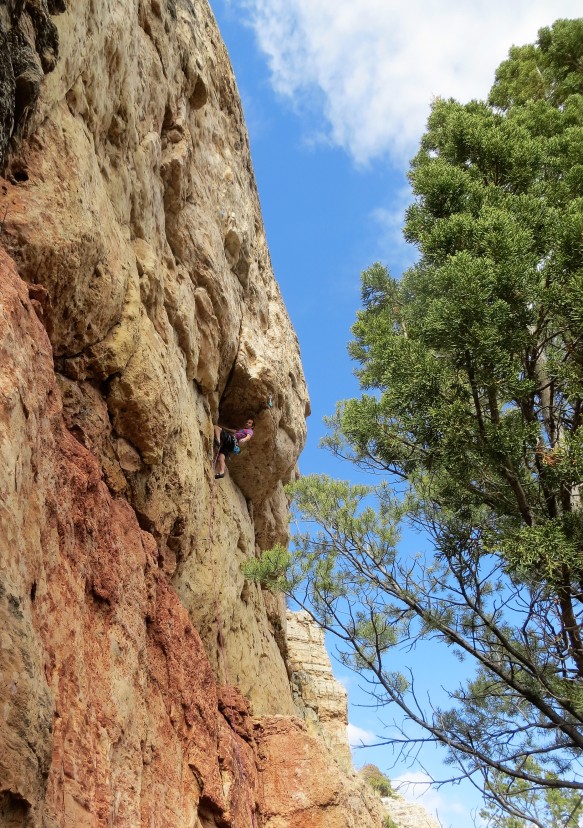 Shaking out below the undercling roof exit on Booty Sweat, 5.11b. Photo Amelie A.

The most intimidating line on the wall climbs out the center of the roof. Thanks to a few sinker pockets I climbed fairly easily up to a good shake at jugs below the ceiling. Just as I arrived, Amelie announced she needed to pee and she couldn’t hold it. Fortunately there was a bolt right at my waist, so I clipped a loose sling straight in to the bolt so Kate could help Amelie. This gave me plenty of time to contemplate the imposing obstacle above. Once I was properly on belay again, I charged up to the lip and groped my right hand over to a shallow 4-finger dish. I couldn’t see an elegant way to get established over the lip, so I coiled and hucked my left hand for what appeared likely to be a big jug. It was, and I stuck it, but it was incredibly prickly. My feet swung out wildly as I stuck the jug, and Kate shouted up “that was sick!”, which is incredibly rare—usually she is completely and justifiably unimpressed by my climbing antics (having seen the sausage being made, so to speak). I replied with, “what’s sick is what happened to the skin on my hand.” My palm was torn up and bleeding in a few places, but it turned out to be nothing serious, just enough to warrant the name “More Shredded Than A Julienne Salad.”

Working up the headwall after surmounting the big roof on …Julienne Salad (5.12b?) Photo Amelie A.

Perhaps the best line turned out to be the 5.11- linkup that joins the bottom half of Booty Sweat to the top-half of More Shredded…, climbing through the left side of the big roof via a bubbly pancake flake. It’s a classic jughaul with no hard moves to speak of. I’m generally not a fan of linkups, and I had no intention of bolting this line when scoping the wall from the ground, but once I rapped the wall and saw the line of jugs I couldn’t resist.

Scoping holds on The Boy Everybody Was Jealous Of, 5.12a. Photo Logan A.

The other two lines on the wall, Be Australian and The Boy Everybody Was Jealous Of, involve sustained pocket and edge climbing on great stone. They’re both worthwhile. I hiked past this wall probably 20 or 30 times while developing the rest of the North Gym in 2011, and I always intended to bolt it, but I never got around to it for whatever reason. I assumed somebody else would claim it during my 5-year exile to Clear Creek, so I was surprised and stoked to find it still untouched last November. In retrospect I’m really glad I had the opportunity to put these routes in. I’m sure some day in the future, once every route at Cactus Cliff is polished to glass and has a queue 10-ropebags deep, these routes will be well-appreciated by adventurous loners like me. 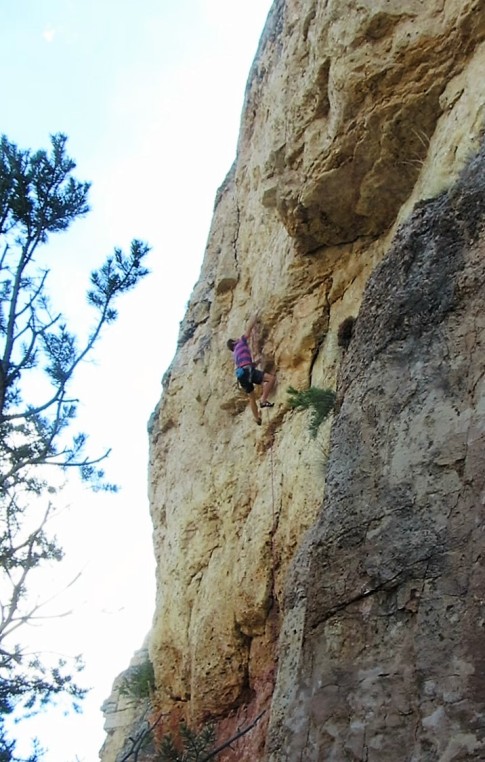