I made a long weekend trip to Jackson Falls, with a large amount of work on my plate.  My goal was to hand verify every description and ad mechanical details, stuff like “Starts five feet left of the large tree.”  That sort of thing.  One of my major grips with books are when they reference a route from another route.  Long story short, if you’ve never been to the area, its really hard to find a route if it references another route, so I try to find obvious reference points, like “The small triangular talus” and so forth just so its clear.

I also wanted to check all the topo images and for the most part, these were perfect.    I also timed and did the distance for each hike.  Another gripe of mine.  The Ten Sleep Book for example, assumes the hiker can out pace an olympic athlete if you actually do the math on the distance of the hike + the time it says.

Of course, I wanted to climb too 🙂

My first day, I started out by shooting some images of some climbers I met up with.  To facilitate this (after trying to scramble to the top with no avail), I climbed “Fine Nine” 5.9 which is an incredible slab route!  I shot images of Kevin Sarvela on the “Lovely Arete” 5.11a, an incredible route that really exemplifies the awesome climbing, movement and sandbaggery of the Falls.

I decided to do my “Dan” thing by warming up on 5.12 so I picked “Shock Therapy” 12a and got the onsite warm-up pretty easy – the route is just a V3 boulder problem to some 5.10 climbing!  Next, I got on “Extinguisher” 12a , which really impressed me with its movement.  Just by looking at it the route looks like it is short and has no holds, but it climbs big and technical moves between killer two finger pockets!  I really had a blast climbing this one!

I then took a bit of a break, and shot photos of “Viking Blood” 12c, a route which had appealed to me since I saw it.  I was happy to watch Branden Michelkamp climb the rig, who brushed all the holds for me, gave me the beta then belayed me for my Flash!  I love the route.  It started out fairly techy, but immediately jumped right into some really.  Really thin face climbing mostly positive but small holds.  I was really happy for my hangboard workout on this one + the beta from Branden.

I next set my sites on “Bursting Out” 12c, this really awesome looking face climb.  From the ground, the roof is clearly the crux, but the route hits you hard right off the start.  The moves on the vertical portion of this route are super thin and super insecure.  I remember throwing for a sidepull/sloping thing hoping it was a hold, but it wasn’t.  I managed to stick it, smear hard (thanks for good rubber Tenaya) and finally get to an actual hold.  I pulled the roof easily enough, then sat in the rest for a coons age, hoping the route was over.  It was – its maybe 10+ to the anchors!  I was really happy to get the onsite on that one! 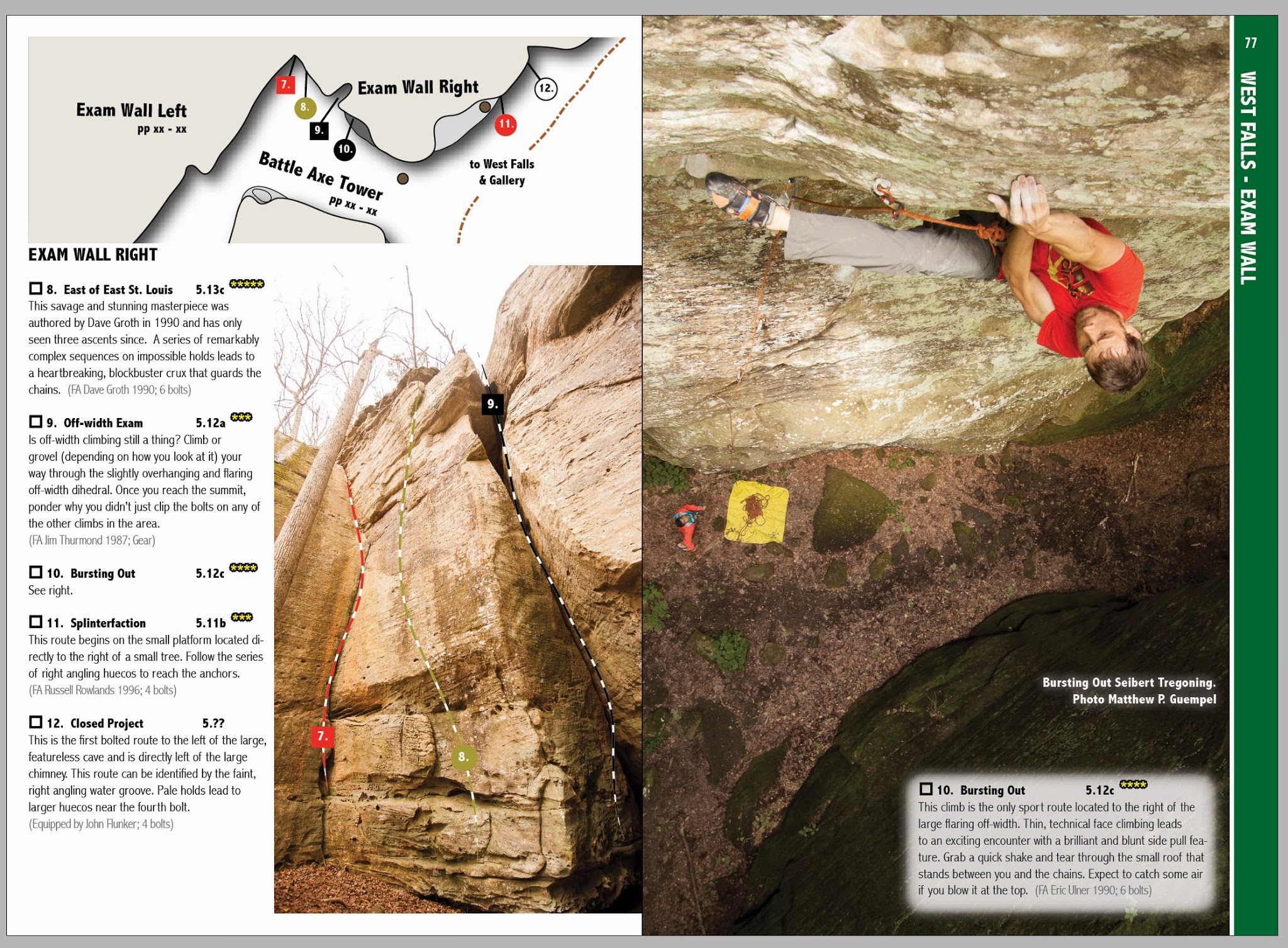 I finished up the day by onsiting “The Bolted One” 5.11d – a one bolt mixed route (see the topo photo above.)  Thankfully, the crux itself was more of a “face” and “layback” move so the climbing felt pretty casual to me.

I figured two 12cs both first try with one being an onsite + and 11d gear onsite was good enough for the day, so I spent some time working on the book.

The next day, we headed to the “Hidden Peaks” area where I warmed up by climbing the mixed route, “Naked Blade” 5.11a.  This route was pretty good, though not as good as I was hoping.  The climbing was a little forced – not like squeezed force, but not very aesthetic.  Maybe I just messed it up or something!

I then jumped right onto “Elders of the Tribe” 5.12c and got the onsite!  The climbing at the bottom was dangerously run-out but easy enough, then the crux hit at about 1/2 heigh:  Some crimper moves and a really small left hand sidepull to a “DYNO” to an obvious jug/ear.  From there its butter!  I was really happy to put this one together!

I finished the day onsiting “The Farmer” 12a.  This one climbs a maybe 10+ layback flake system for about 40 feet until the abrupt end.  From here, the face blanks out leaving just enough tiny small edges to make the route awesome and hard!  This one really stood out to me as being AWESOME.

I shot a sequence of images of Kevin Sarvela on the route to the right of it and the MEGA CLASSIC on the wall, Detox Mountain – 12a.

My last full day of climbing, I warmed up by climbing what is described as the “Least onsited route at Jackson Falls” – The Vow 5.11d.  I really like this one and totally saw why it gets the rap – the climbing is very insecure, but awesome and creative groveling up this really smooth, but gritty water streak.  From the ground, it looks easy, but trust me.  ITS NOT!

From here, I ran over to meet up with some locals, and climbed the high Recommended “Who Needs Friends” 12a onsite, then put a few burns into “Red Corvette” 13a, though I one hung it several times, I walked away from this one sans send but hopeful for my next trip.

I rounded off the trip with a morning session with Chris Roos, warming up with the onsite of this totally bouldery route:  Industry 12a.  I really like this one, it was totally a boulder problem on a rope, topout included! 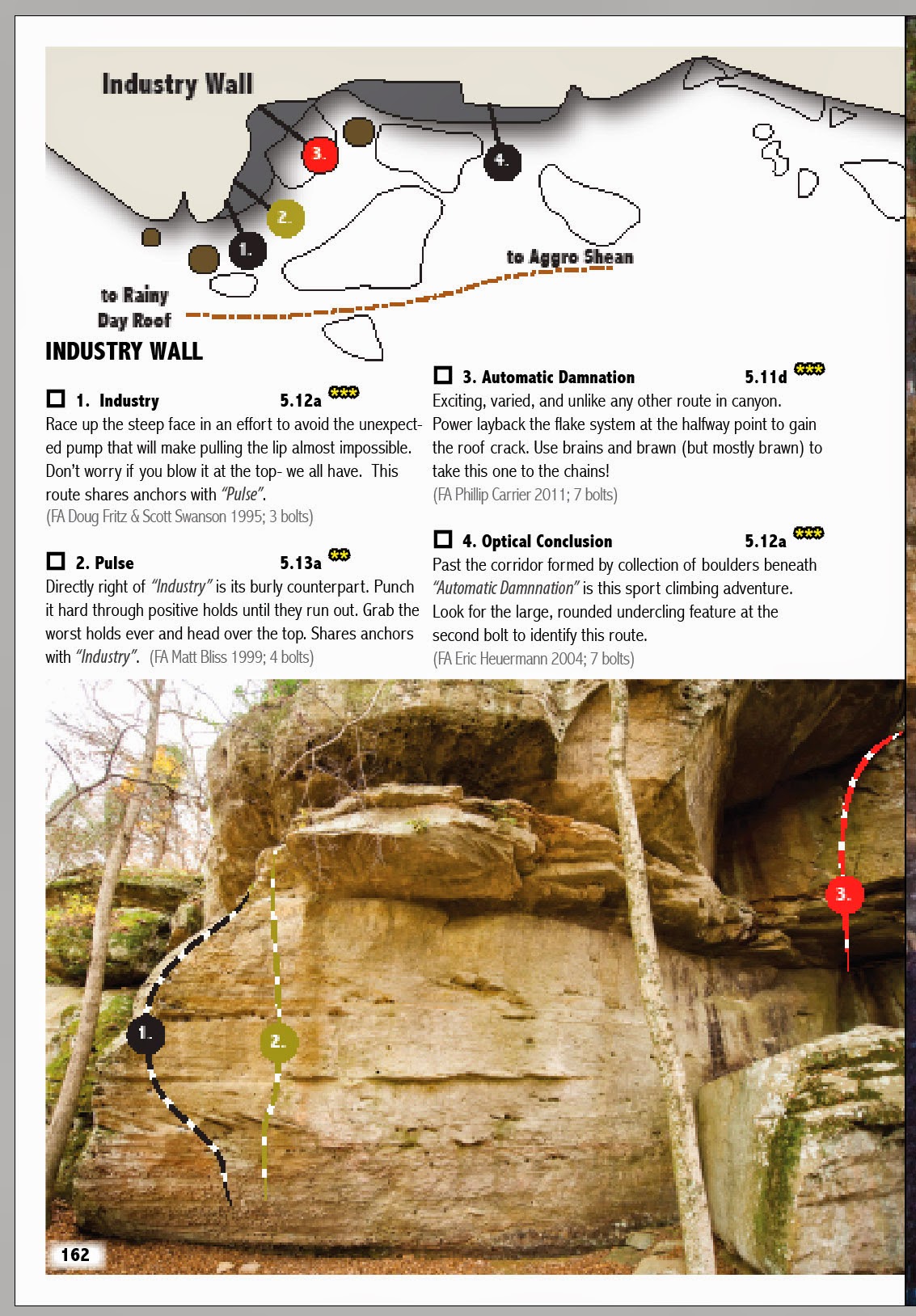 I finished the day at the “Snakes Roof” area onsited “Umbrella Girls” 12a, a bouldery and very slopery route.  A lot of the holds were definitely MUCH WORSE than I thought they were going to be but I managed to make it to the chains!  My last “hard” route of the day “Feathered Serpant” 12b, which I got second go, missing a hold on the onsite.  Can’t win them all right?  I finished up by climbing “Who Let the Snakes Out” and awesome rail traverse 10b! 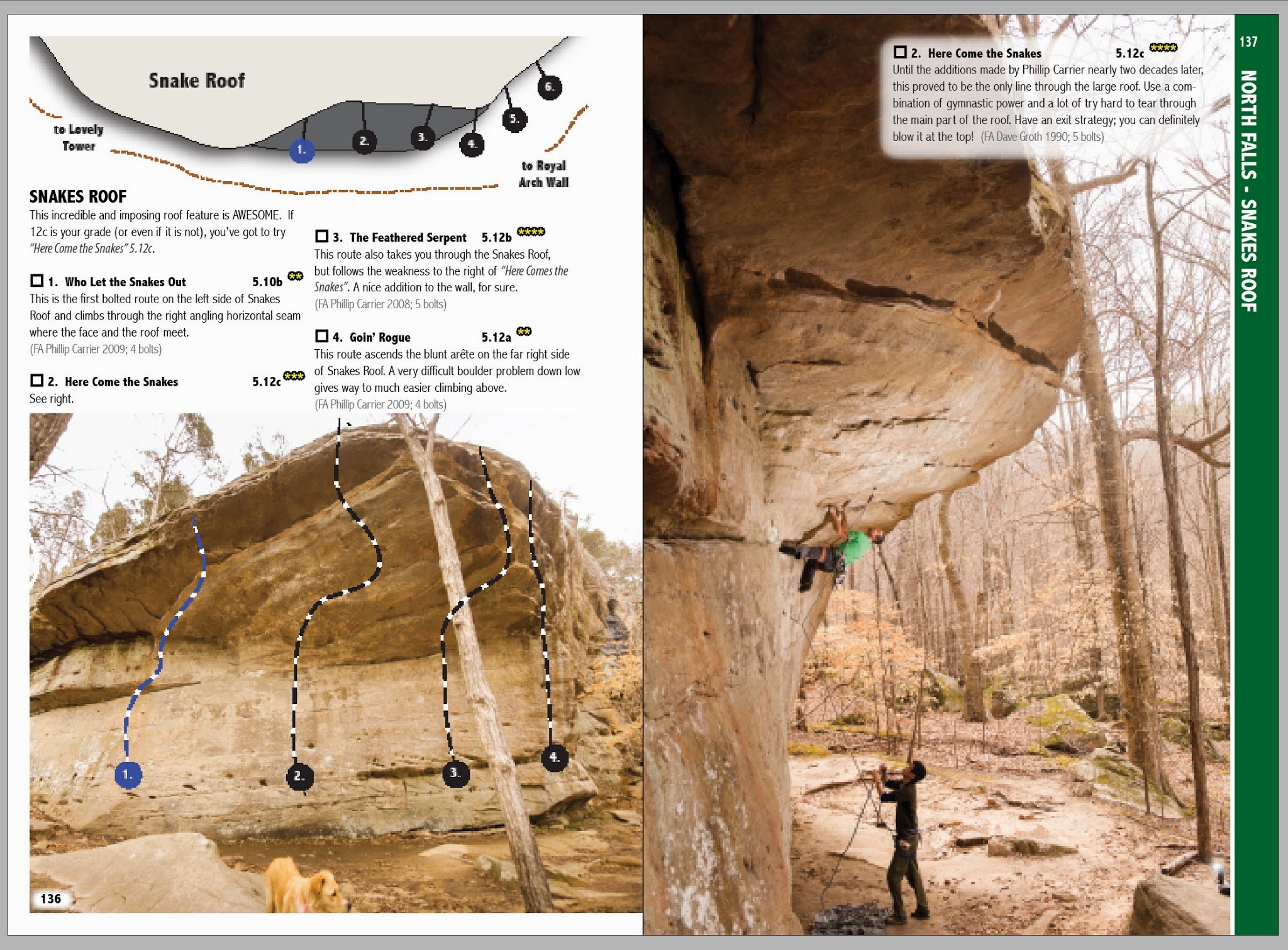 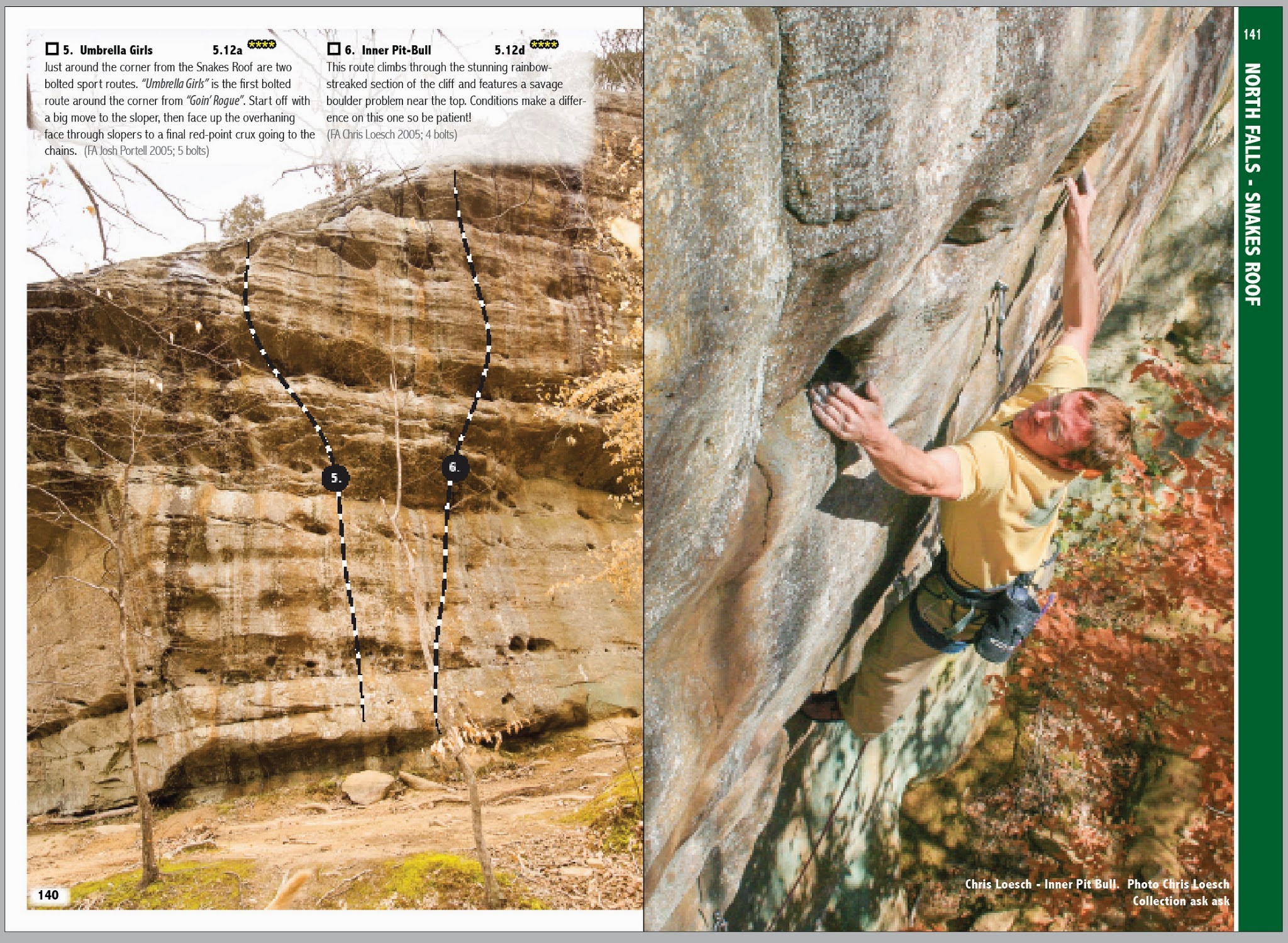