Fall is here, but I don’t think the weather got the memo.  It’s been pretty miserable so far here in West Virginia.

Two weekends ago, we made the long drive to Jackson Falls in Southern Illinois.  I haven’t been there since I put the finish touches on the guidebook I published for the area last fall.  It’s about an 8 hour drive for me.  Yusuf Daneshyar, my buddy and author or the book asked me early this summer if I could do a trail day and I told him that I would try.

Confirming the trip with the female administration, we set out late Thursday night after work for the long haul.  Though it’s a long drive, the climbing at Jackson Falls is AWESOME plus I really wanted to help out with the trail day.  I didn’t know what it would be, but it ended being right up my alley! I’m trained as a bridge engineer and we built a pedestrian bridge over the waterfall!

I promised Lauren all these awesome waterfalls and funny enough, it had been so dry this summer there that all the waterfalls were dried up! It made building the bridge a lot easier though.  Now, I stated I’m training as a bridge engineer, but that doesn’t actually mean that I can build a bridge.  Thankfully, there were several guys in the group who were carpenters and we snapped the thing together pretty quickly and efficiently.  Being a route setter, I’m pretty good at screwing.  So I just spent most of the time holding wood and screwing.    Yusuf promised me he would send me pictures of the bridge with water flowing, but until then, just use your imagination. 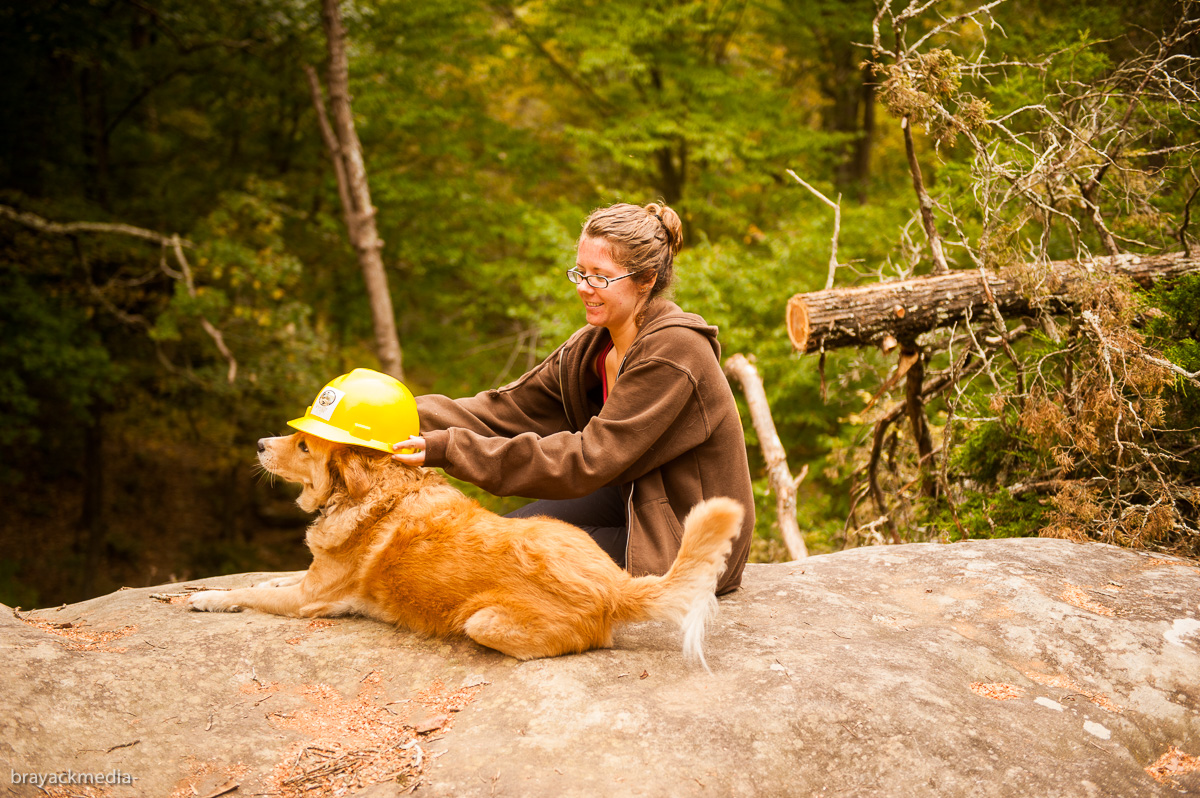 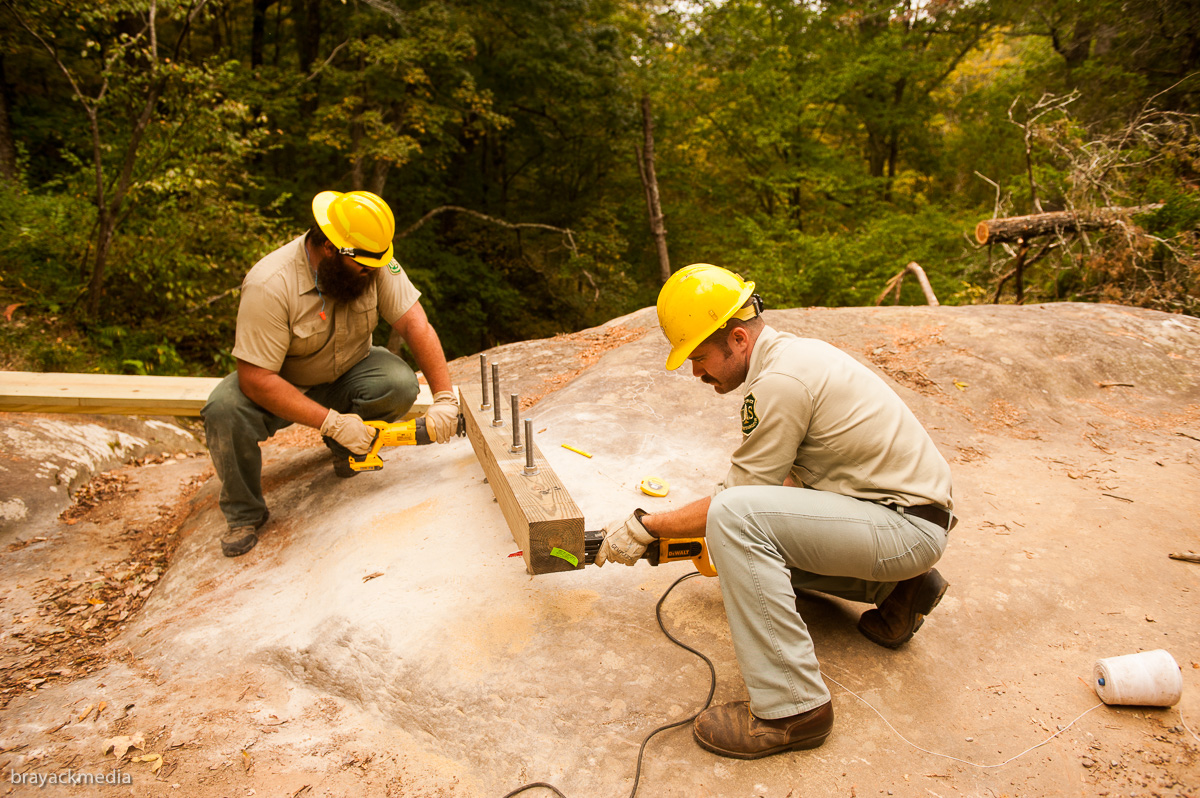 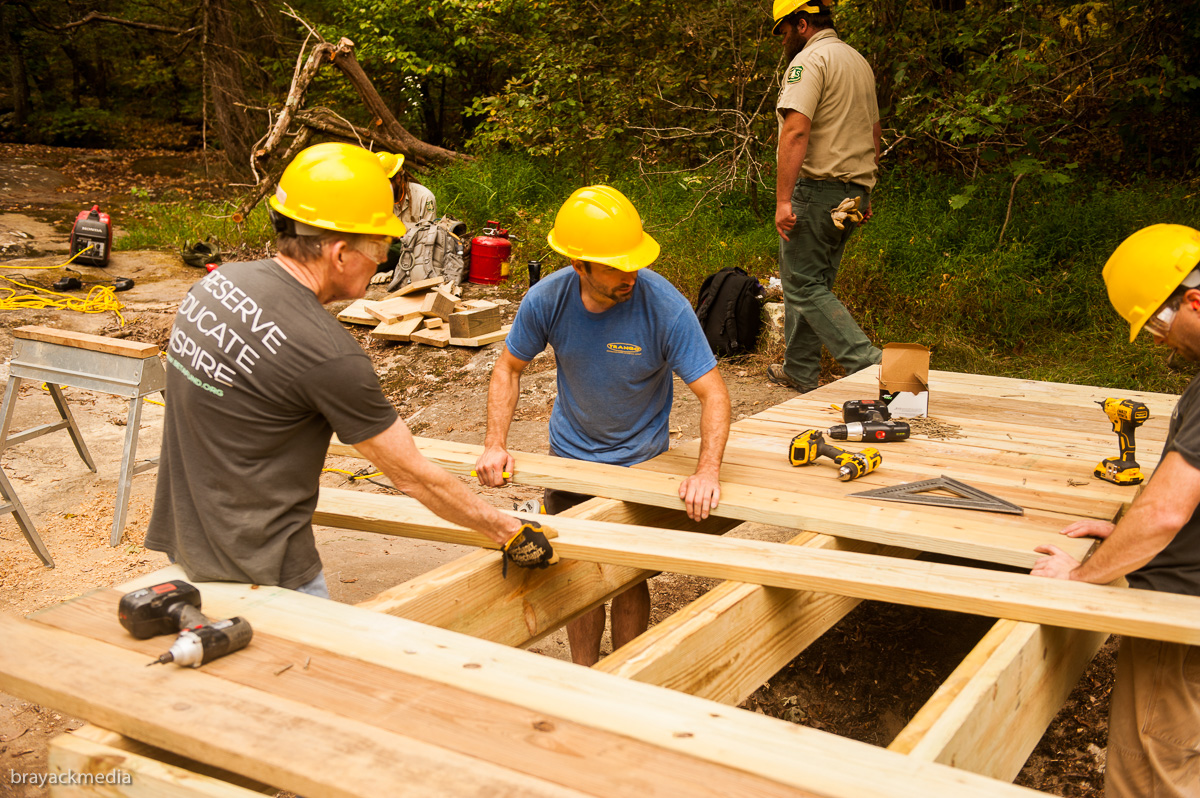 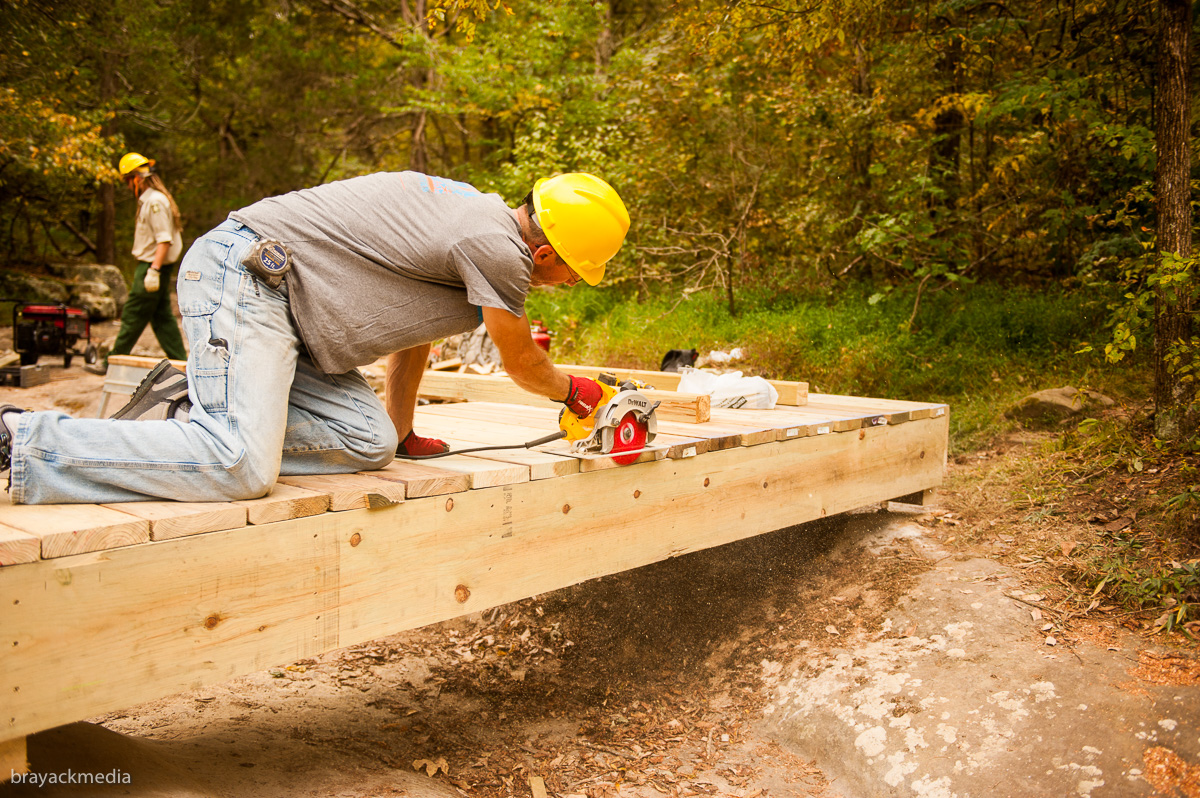 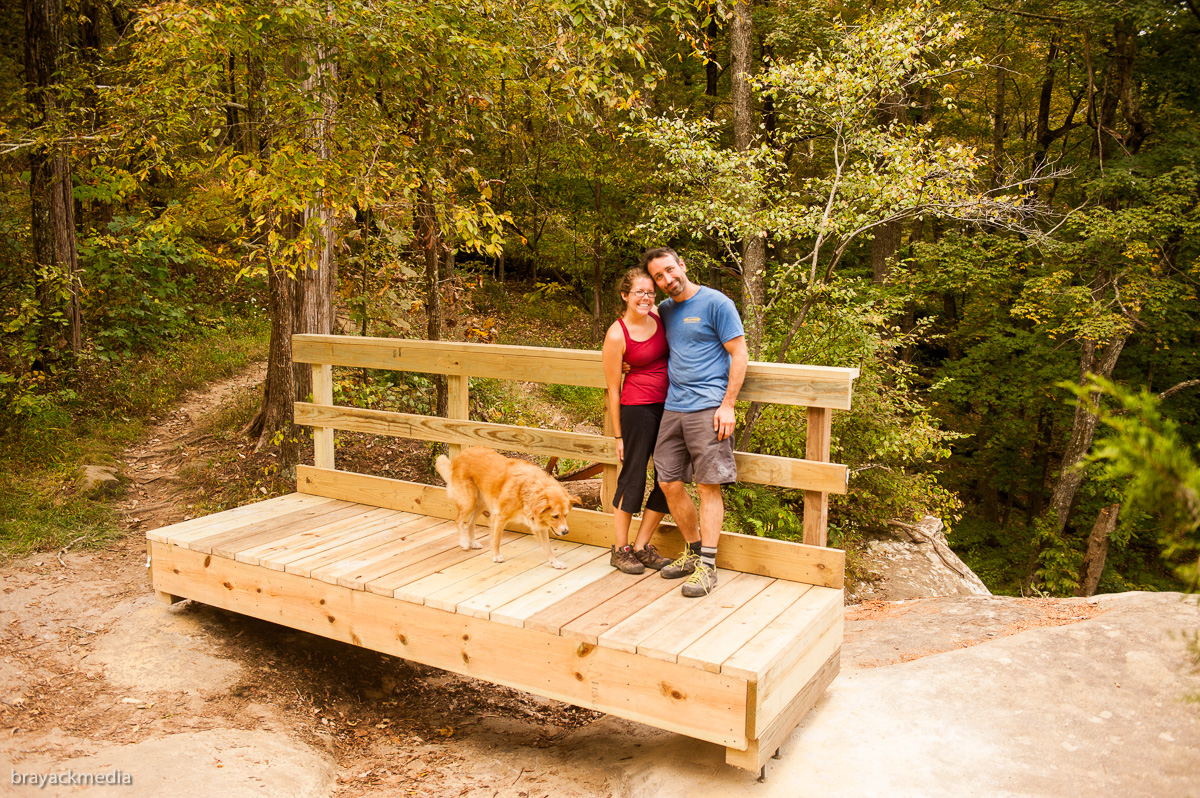 Though we had the trail day, we still had a crap ton of climbing time.  The way Jackson Falls is laid out, the camping is right at the crag, so once you’re there, you don’t really move your car at all.  The closest amenities are far enough away that climbers are better off just bringing in all their food/water for their trip.  Its pretty awesome not driving anywhere for such a long time and I think those 3 days may have been my longest “no driving” time of my life.  I’d really have to think about that…but yeah.  Kind of crazy to think about right?

I actually like climbing (I’m definitely not the best climber at the crag.)  With the conditions being so hot and humid, I backed things off and did a bunch of easier pitches for the most part.  I started strong and got a second go and onsite of two short 5.12cs – “Heavy Horses” and “Storm Watch.”  Both of these involved short but hard boulder problems on small monos and two finger pockets.  Because of my training and specifically my hangboarding, these are my greatest strengths.  I mostly stuck to cleaning up on the classic 5.10s and easy 5.11s, climbing as many pitches as I could convince my girlfriend to belay me on.

I set my sites on one route:  King Snake 5.12d.  Conditions and the holds on this one especially were just plain awful, but I strapped on my brand new Tenaya Iati’s which earned their street credit on this route.  I didn’t get the route, but fell, my hands slipping off the last HARD move of the route. I was really bummed, but also really stoked.  The route is really difficult for about 30 feet of super intensive power enduro bouldering – big moves between good and not-so good holds with really bad feet.  This route is now my main project at Jackson Falls!  To be honest, I was surprised I got that far.  I snapped a picture of my temperature/humidity gauge.

It’s just so hard to climb in the mank.  I chalk like a madman and use a lot of isopropyl alcohol, but I still feel like I just got out of the pool!

All in all, I really banged it out at Jfalls, despite the bad conditions! (Almost all of these were new routes for me.) 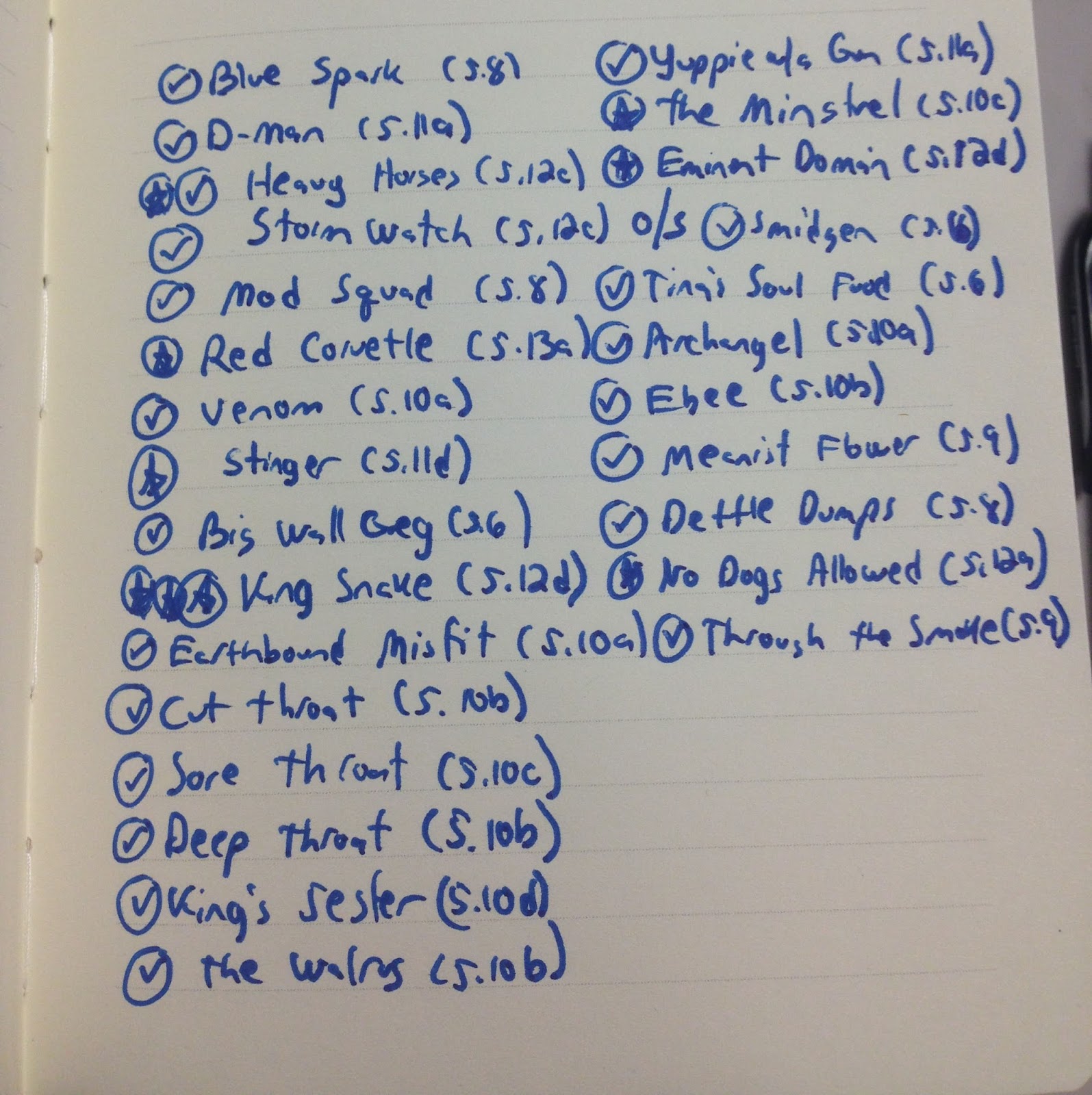