As I said in my last article (Spring, Sprain, Summer, Send?), I’m having somewhat of a “Cinderella Season”…with things just clicking despite some minor adversity. As I bragged in that post, I sent one of my “life list” routes, Grand ‘Ol Opry (5.14c) at the Monastery. It went faster than I expected, leaving me with just under three weeks of “bonus climbing” before our big trip to Europe…what to do…in Colorado…in the summer?

We tried Wild Iris on the first weekend, and found it too hot, so instead, we opted for Independence Pass…maybe the coolest (coldest) climbing in Colorado.

Mike showing off after sending “Before there were Nine”, 13d at Indy Pass, back in July 2012.

Waaaay back in 2012, I worked and sent Tommy Caldwell’s route Before there were Nine (not his name, as far as I know). While I was working the route, Mark visited and we spotted a “futuristic” (for us) line of holds in the middle of the Grotto Wall that we were sure could hold a route.  I was living in Florida at the time, and the proposed route was out of my reach, literally and figuratively.

Mark returned, however, and bolted the line in the Fall of 2013, and sent it just over two years ago, establishing, Insurrection, 5.14c and the hardest route on Independence Pass. He described his epic send in this article from May, 2014. I always wished we could have worked the line together, but, as I said, it was beyond me, and I’m glad he got the First Ascent. 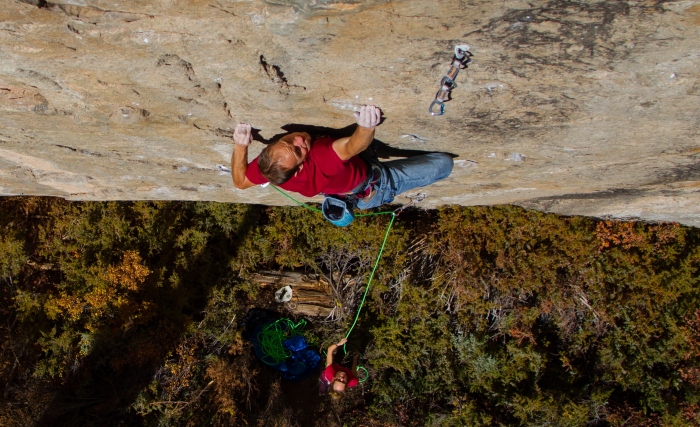 Mark Anderson on Insurrection, 5.14c, back in May 2014. Stretching for the sloping edge at the end of the redpoint crux. Check out those awesome micro-crimpers!!! Photo by Adam Sanders.

So, with about two weeks, I thought maybe I had a shot at sending Insurrection, and completing what Mark and I envisioned four years ago.  It would be really tight, but if it didn’t work out, I could return in the fall to finish it off.

The best part about climbing at the Pass is the camping!

I busted out of work on Wednesday, the 8th of June, with my good friend and trusty belayer, Shaun. I checked out the route, and it seemed plausible, but hard.  The holds were much smaller than those on Grand ‘Ol Opry, and the rests were not as good (or almost non-existent). Nevertheless, there was nowhere else cooler to climb, or better to prepare us for the granite-laden Zillertal region of Austria, so I figured I’d give it the old college try with the roughly 2 weeks I had left.

Mike Anderson on Insurrection, 5.14c. In the crux section by the 3rd bolt, setting up for a powerful undercling move. Janelle Anderson photo.

Since the 8th, I managed 5 climbing days on the Pass, and squeezed in two ARC’ing sessions at the gym to build up my ability to recover on the route.  This last Saturday, everything clicked…we had great weather (waking up at 4:45 AM helps with that!)  I had the moves dialed by now, and my fitness is peaking, thanks to the work put in on Grand ‘Ol Opry. I sent Insurrection on my first go of the day…a rarity for me. I usually get flash pumped on my first go, and really think of it as a warmup burn.  This time, I warmed up really carefully, took time to stretch thoroughly, and massage my forearms before the send.

The climbing is a power-endurance test piece with hard, dynamic moves and little rests, so for me, the send was all about rationing my effort.  I really focused on breathing and relaxing my grip on every hold…this is especially important with dynamic climbing because you tend to tense up and stop breathing when you dyno, as you engage your core. The key is to recognize this, and make a conscious effort to relax after every dynamic move. The mileage I got on the rock while working Grand ‘Ol Opry really helped me dial-in this technique, and it showed on Insurrection. 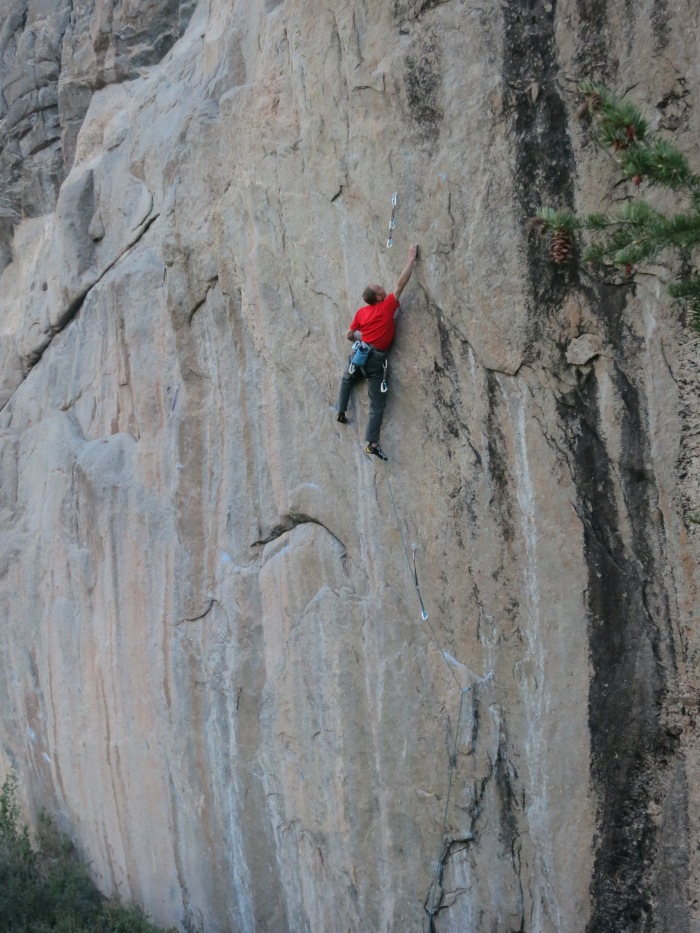 Mike Anderson on Insurrection, 5.14c. Sticking the flake and getting ready to make a strenuous clip.  Janelle Anderson photo.

Insurrection is a brilliant route! It’s in the center of Independence Pass’s most prominent crag, and one of Colorado’s most historic sport cliffs. It’s now the centerpiece of that crag. The rock is excellent, and the moves are really cool, especially if you love crimping like I do!

My experience is limited, but I think the 5.14c rating is legit, and I think I’m in a good position to make a comparison to Grand ‘Ol Opry. GOO took me 6 climbing days, and 14 days from start to finish. I was able to send Insurrection in slightly less time…5 climbing days spread over 11, but that was with the benefit of the fitness and technique I developed working GOO. GOO is longer, and has more moves to dial in, but it has much bigger handholds and pretty good jam-crack rests, one huge rest right before the crux. Insurrection is in your face from the start on very small, crimpy holds, and you have to do a long, 3-bolt crux section with no shakes. You really have to hold it together mentally. Regardless, it’s a great route, and it brings Independence Pass back into prominence as a cutting-edge sport crag, the best summer destination in Colorado.

I’m feeling my strongest ever now, at the age of 39, and I have really high hopes for Europe. This winter and spring were humbling for me, and I had to re-dedicate myself to training and climbing. My birthday was May 5th, and at that time I told myself: “it’s a new year…forget about 38 because 39 is going to be your best year yet!”  It’s working so far, and I plan to keep it up! Training on Trango’s Rock Prodigy Forge, with it’s specially engineered micro cripmp, has really paid off. My crimping is the strongest it’s ever been and it’s showing in my climbing. 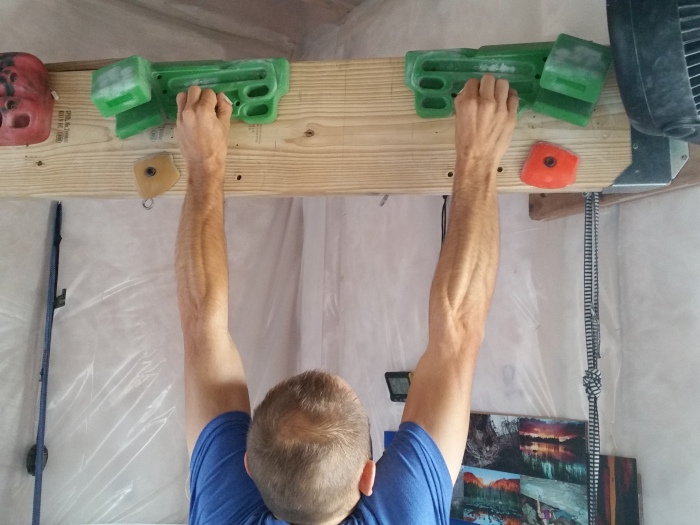 How I got this way! Thank you Forge hangboard for your awesome micro crimps that help me train smart and climb hard!

Thanks Mark for having the courage to bolt this line and see it through to a route. Your passion and dedication are a huge inspiration to us all!