I am a route climber at heart.  I train to route climb.  I live to route climb.  When I dream about climbing, I dream about route climbing (though sometimes I realize that I’m naked half way up the route and everyone is looking sometimes.)
I take my route climbing very seriously, but in the winter, its really too cold in my area to route climb.  Enter bouldering season.  Bouldering for me is just fun – I take it serious and try to boulder as hard as possible, but the level of commitment for me for individual boulder problems is a full order of magnitude less than for routes.  Also, for bouldering, I can perform fairly well a little heavy, so I relax my eating and dieting during bouldering season.  But best off – bouldering is REALLY good for route climbing.
Over the past two months, I’ve had three major bouldering trips (with one two week trip coming up soon.)  The ongoing training using the Rock Climber’s Training Manual has contributed to a major gain in my climbing and that gain has also translated over to my bouldering.  Also, I am truly appreciating the quality of my Tenaya shoes. 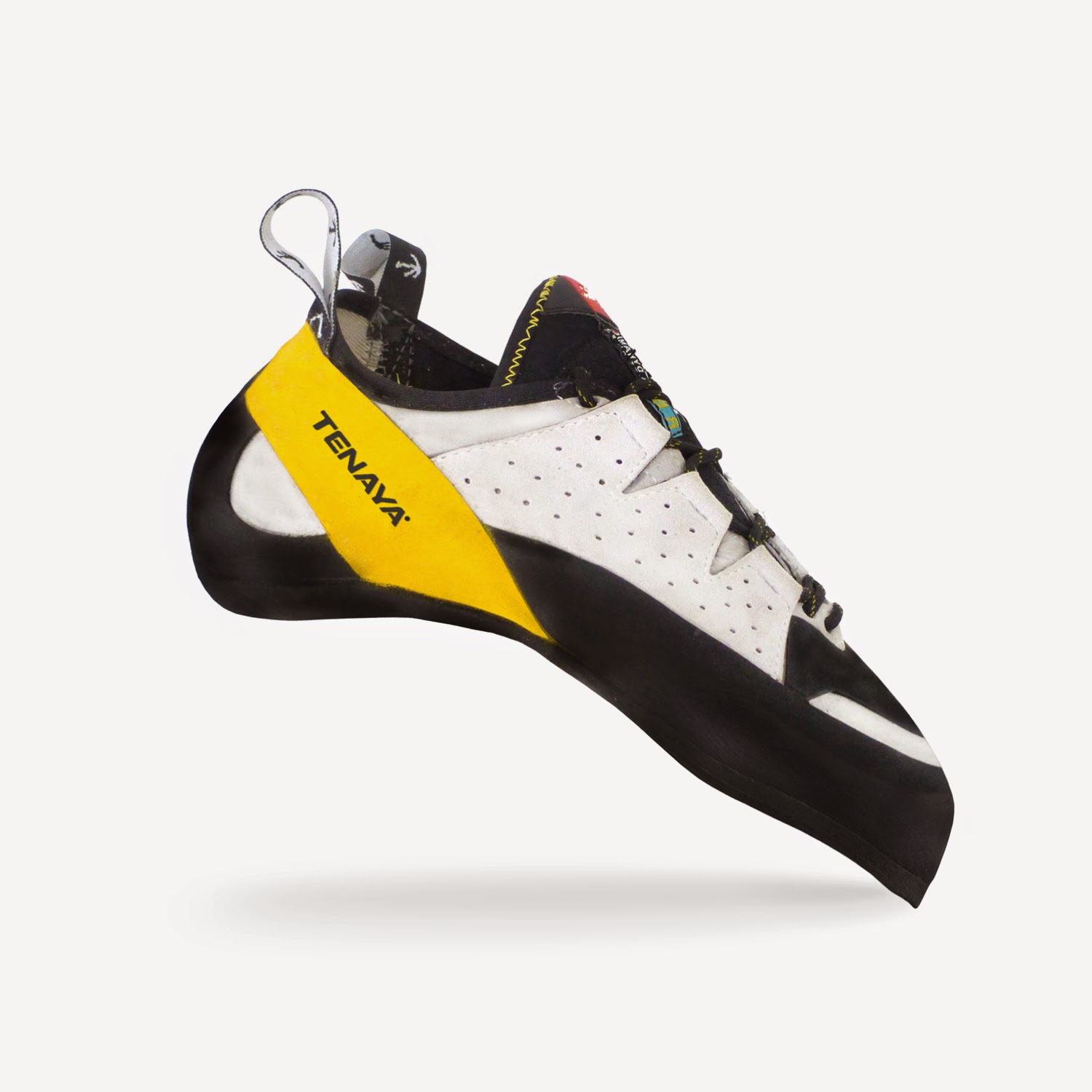 Through the New Year, I did a trip to Rocktown.  For me, the ideal bouldering trip is either 3 days including travel or two weeks.  A trip shorter than 3 days, I feel rushed and don’t get enough time to boulder to my limit.  Any longer than 3 days and less than 10 days is a waste without ample rest time to grow back skin.  I have two different modes and will describe them:
On a 3 Day Trip, I try to pick problems that I can do in about an hour or less.  I will do a cursory attempt on a problem and feel out the moves and holds and try to determine if I can do the problem quickly.   On a short trip, skin is a super precious commodity.  I priority problems that suit my strength which right now is really small holds and big lock-offs.  If I don’t think I can do the problem, I will write it off and consider trying it some other time when I’m strong.  I will try to get as many problems done as efficiently as possible keeping as much skin as I can.  Problems that are “shoe” problems – techy etc, are perfect for this kind of trip because they are typically very easy on the skin.  Also, “big muscle” problems are good because they are usually palm and hand contact problems and not tips.
I typically consider day one to be my peak performance, with the second day being my “clean-up” day where I try to go and send the stuff I was close on but didn’t have to strength.  My second day and possible my third day (if its not a travel day) is also my “scouting” day where I put minimal effort into a handful of problems for my next trip – seeing what they are about, whether I think they are possible for me and what their requirements are (and of course, whether I like them and think they’re cool.)
On a long trip, I pick stuff strategically and plan to climb them multiple days with the first day or two on the problem being a “scouting” trip where I learn the movement and then rest hoping to send them when I’m the freshest. I rotate through problems that work different parts of my body so I can try to send them all somewhere in the middle of my trip.  I supplement these hard problems with a good bit of easier “fun” climbing as well.  I will talk more about this while I’m on my two-week Bishop trip.
At Rocktown, I set my sites pretty high.  I had not climbed there since finishing the book there a couple years ago.  We went full comfortable style and got a hotel room which was very nice.

My primary problem goal for the trip was the “Sherman Photo Route” V7 which I had tried a good bit on my last trip there, but was unable to do.  I made a tick list for the trip. I’ve always been a list maker. 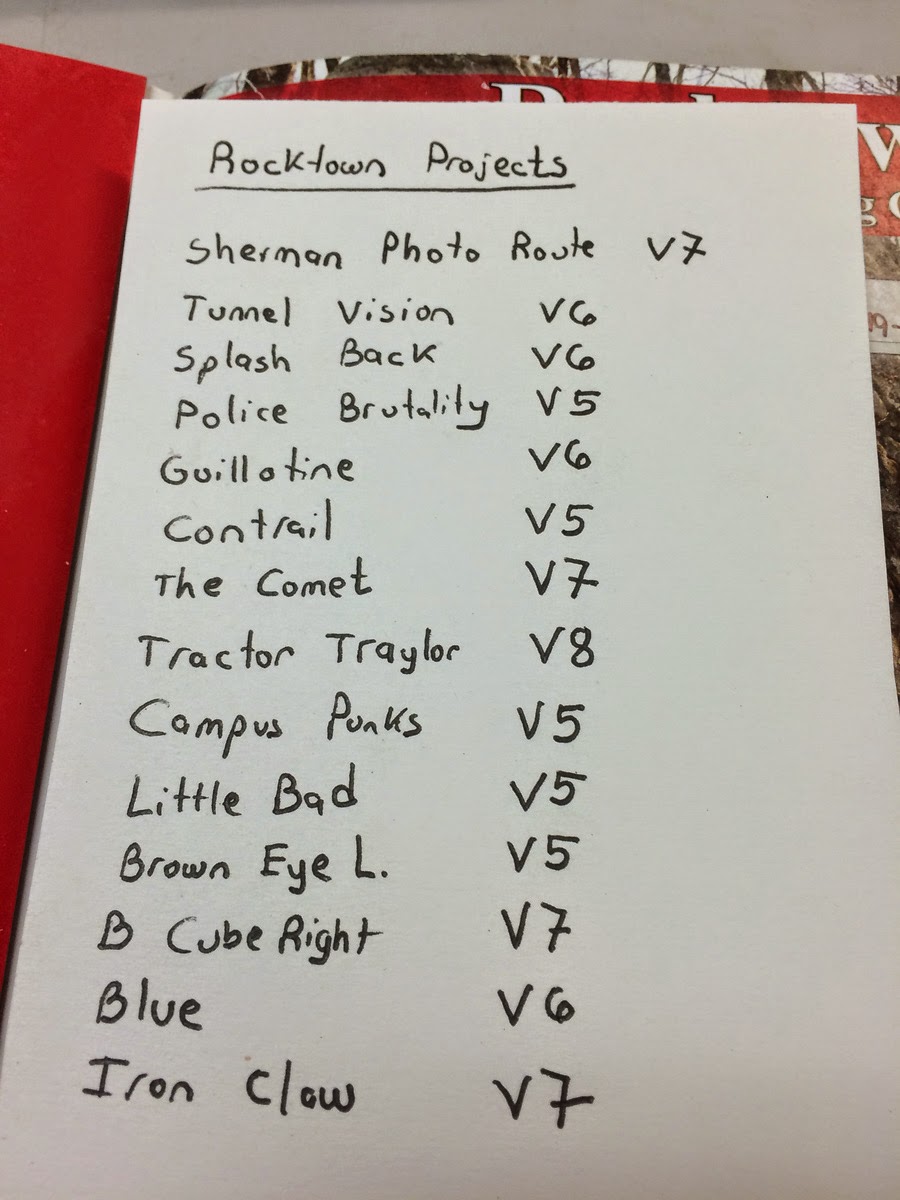 I love technology.  I put a few goes into the “Sherman Photo” feeling out the holds.  I was happy to see that I could hold the holds and could make all the reaches; the difficulty of the problem would be putting them all together.  I wasn’t super sure with the beta so I googled “Sherman Photo Video Rocktown” and BOOM.  There it was.  Straight from my smart-phone, video beta of the problem.
https://www.youtube.com/watch?v=-_EzMq5Ca5E
I fell twice at the last move going for the lock (once you get this its over), but using this beta I was able to do the problem.  I was pretty worried and I fell several times but I sent this one after about 15 or so tries.
I then felt out both “Tractor Traylor” V8   So I next stopped at the Comet Boulder.  I had never really tried many of the problems on the Comet Boulder, except for the easy one, but there was a big group there with lots of pads and I did every single problem on the Comet Boulder, except the Comet Dyno (V7.)  In succession without falling!  Gang Bang baby!  I loved every one of those problems too J 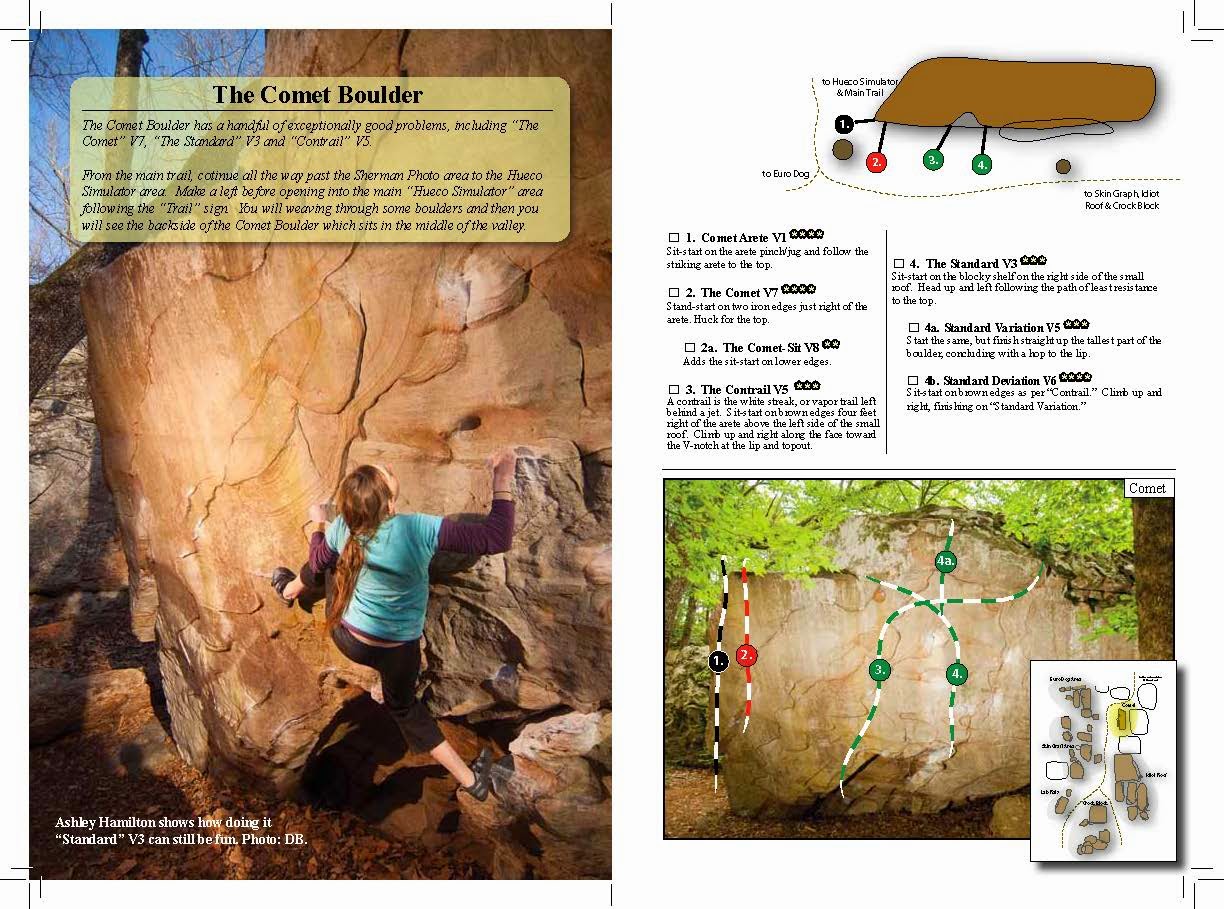 I next set my sites on a problem that I had tried extensively: “Tunnel Vision” V6.  This problem climbs out this super cool steep roof, with body tension being the winning suit.  I really wanted to do this one and sort of broke my “tried it too many times” rule, but really really wanted to do it.  I FINALLY workout out the minutia of the tricky feet beta to do the problem only to fall on the topout move several times.  Probably my last good go on it, I actually got it!
I then (being completely beat by now) go on “Splash Back” V6 and worked this problem a bunch – working out the beta as well.  This problem was a “big muscle group” problem with good holds so I spent some time on this one, not really losing skin.  My best effort, I made it to the topout which isn’t super hard, but fell because my shoulders were too beat up.  I don’t think I could have done a pull-up at that point. 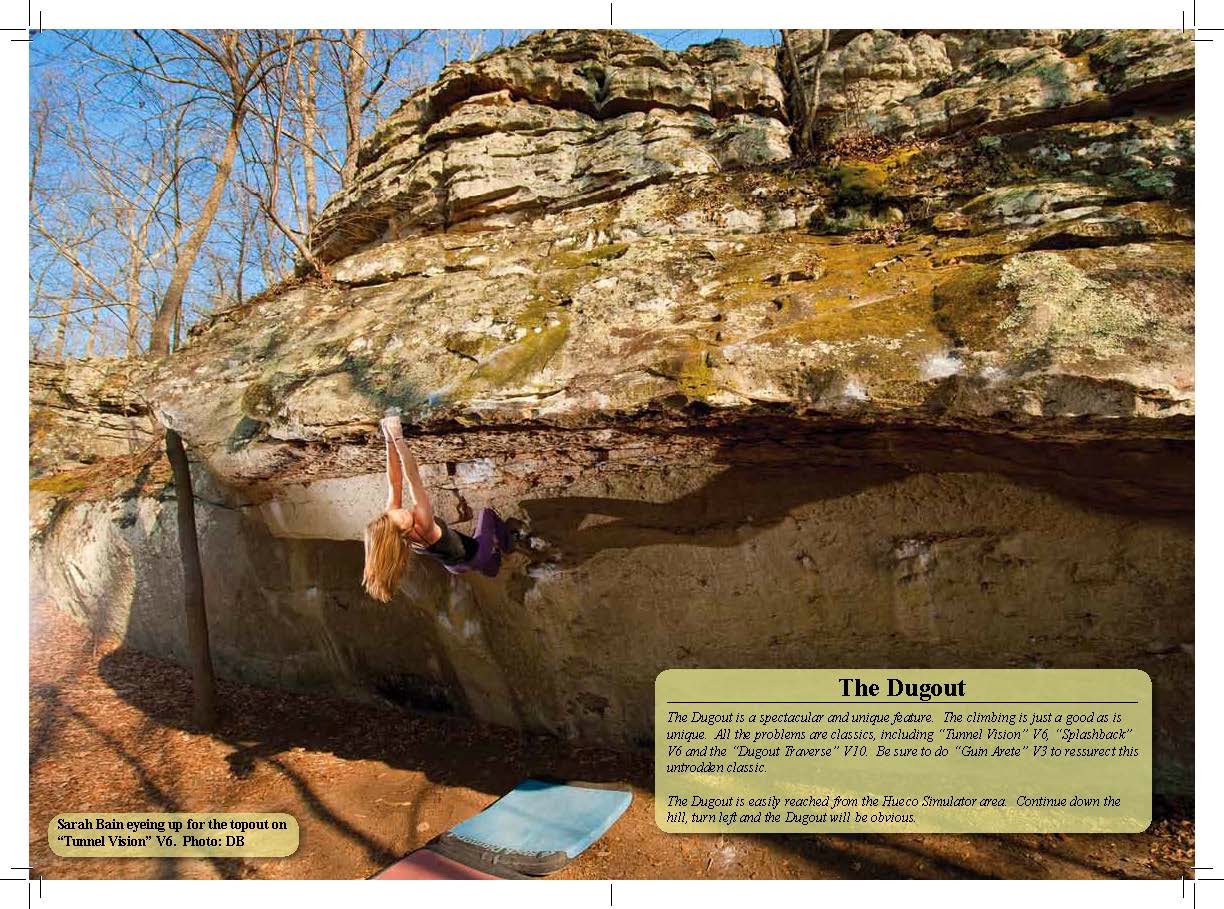 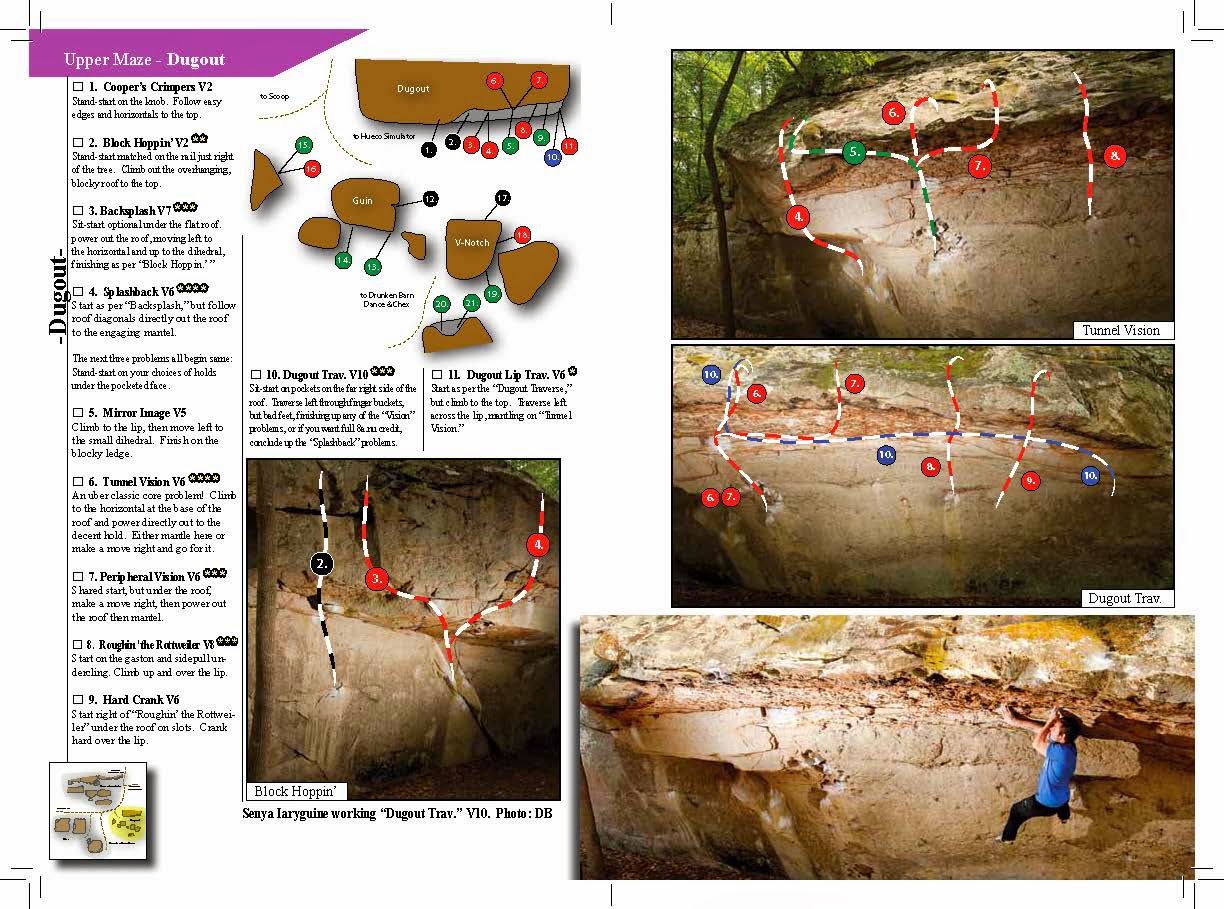 Being completely beat up, I set my sites on another long-term life-goal project of mine “Blue” V6.  That doesn’t sound right does it?  I mean, I’m beat to crap so why not try “Blue” earlier?  Well….Blue is totally a shoe problem.  With my super awesome Tenaya Tarifas, I figured I’d have this one in the bag and I did.  With some body tension and excellent shoes, I did “Blue” several times in a row, once to send it and twice more for photos!  (I really really liked it a lot too.  So the photos were really just an excuse to do it over and over.)
I finished the day with a surprising send of “Campus Punks” V5, a full on slab problem.  Once again the Tarifas performed for me admirably, getting me up it despite being beat to crap!
Having such a good “Day 1” sending several of my long-term projects, I set out day 2 to try some of the stuff that I thought I was less likely to send.
I did some easier stuff at the Orb including “Double Trouble” V5 and “Breaking and Entering” V5, then heading straight over to the “Bad Boulders.”
“Little Bad Boulder” for me is one of the hardest V5s in the world.  I love it.  But man.  Its just so hard for me!  I can get to the last move every time, but the last move for me feels super long.  Like most problems at Rocktown, this problem starts under a bulge, and climbs over the bulge finishing with a lot of bad slopers.
I didn’t really think I was going to do this problem on the trip, but after several goes, I was getting close – almost sticking and partially sticking one hold below the top.  My hopes were dashed when I actually stuck the second to last hold, but then realized I had another hard move!
I dug deep though, and really focused.  This was one of my long-standing projects at Rocktown and with some motivation from my wonderful girlfriend Lauren “she told me to just freaking stop being a chuffer and do it” I did actually do it!! Barely.  Super Barely.  Like grovely.  But boom!  I was soooooooo stoked to do that one and despite it only being V5, it was my proudest send of the trip.
Feeling lucky and pretty stoked, I next set my sites on “Brown Eye Left” V5.  This problem was also very interesting and kind of cool for me.  The problem revolves around some tricky foot-work to setup on two bad holds, then a cut-feet, kick the wall and campus move to a jug.  I probably tried this one about 20+ times before I finally worked out the beta and got it!    I got a pretty nasty blood blister from it though!  (A month later, I still am having problems with it.)
Feeling pretty good and accomplished we hiked over to the “Police” area.  Of course we stopped at “Blue” and I did it again (I really like that one.)  I had “Police Brutality” V5 on my list, though there was a group on “Drug Test Policy” V7.  I felt out the holds and with their beta, almost flashed it!  I was like….ok….I can do this one, and did it super fast!  I tried “Police Brutality” and totally got my butt kicked on in first try.  No thanks!  Crossed it off the list for this trip.
I was feeling pretty sapped at this point but managed to connect the dots on “Mr. Stiffy” V5 first try (of the trip.)   I was trying some stuff on the “Asphalt” boulder (got my butt kicked) but walked around to see “El Bano” but some some dudes just finishing on “Golden Throttle.” V5.  I figured what he heck and flashed the heck out of this super duper scary high ball boulder problem!  I couldn’t believe I 1.  made it up this thing, 2, didn’t die. !!!   No photos or anything on this one as I just randomly walked around the corner with my shoes on, borrow chalk and beta and just did it!  I will NEVER get on that one again, I’m so glad I flashed it.
That night, it rained like crap, so we decided to check out the Chattanooga Aquarium.  FYI if you’re ever in Chattanooga.  DEFINITELY hit up the Aquarium.  It was one of the coolest experience of my life.  Lauren got to pet a sting-ray and they have a full-on butterfly room and a “jelly fish” room.  Wowzers!        !!!!!!!! 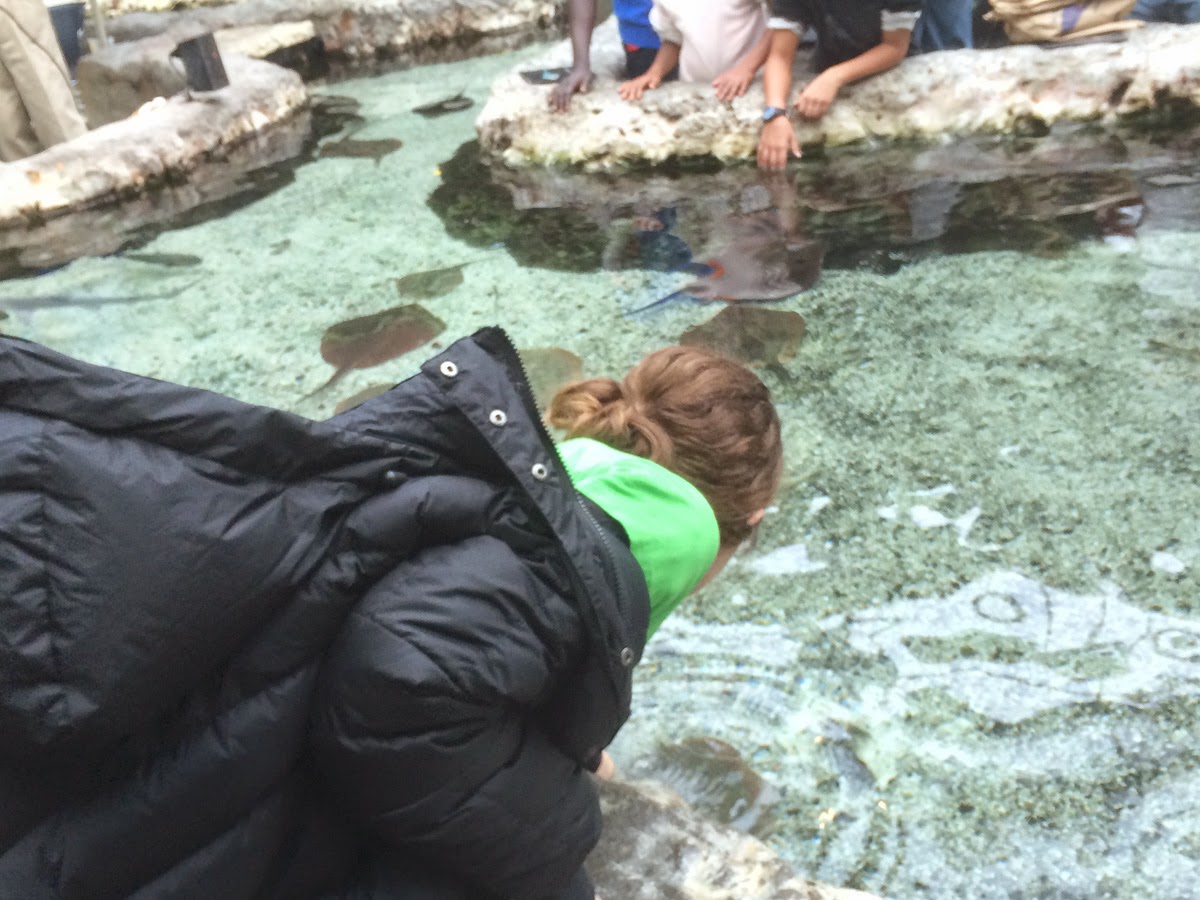 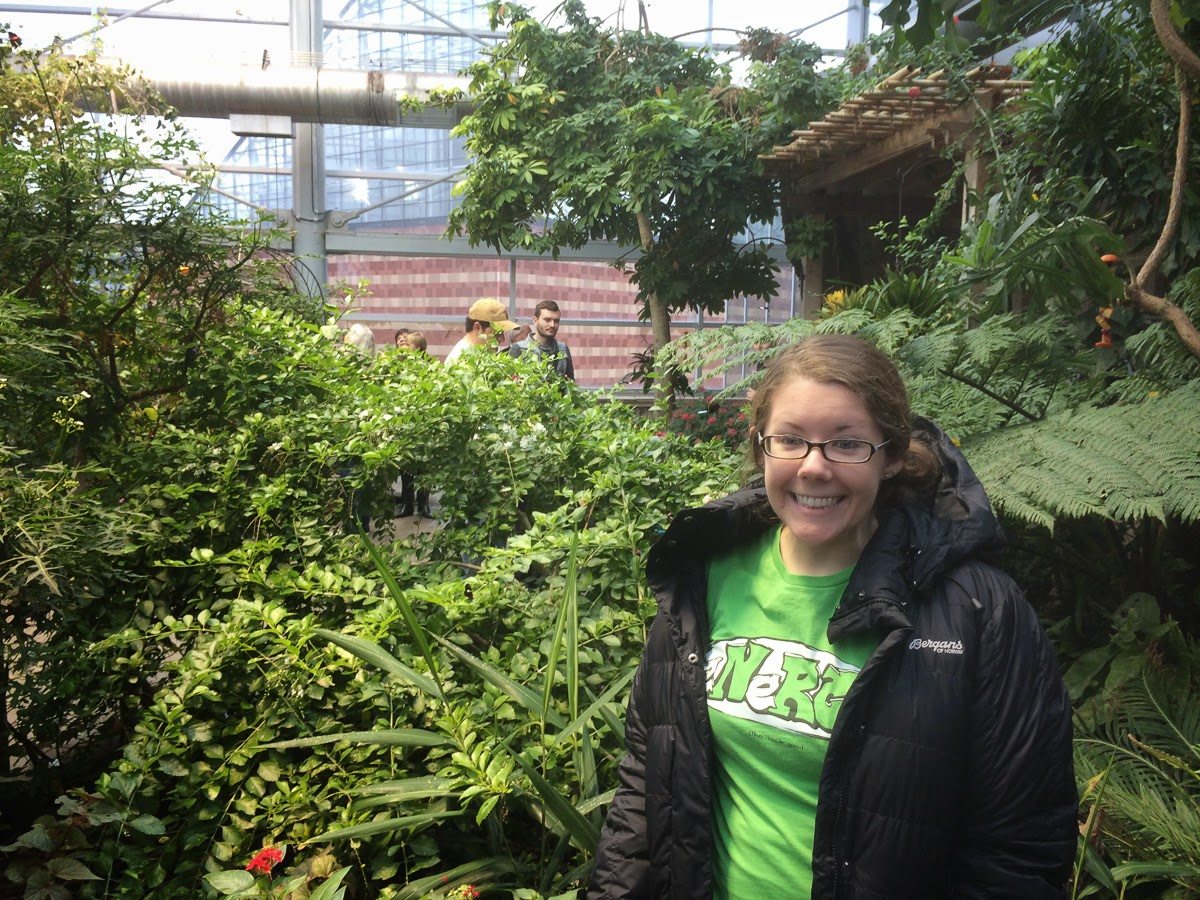 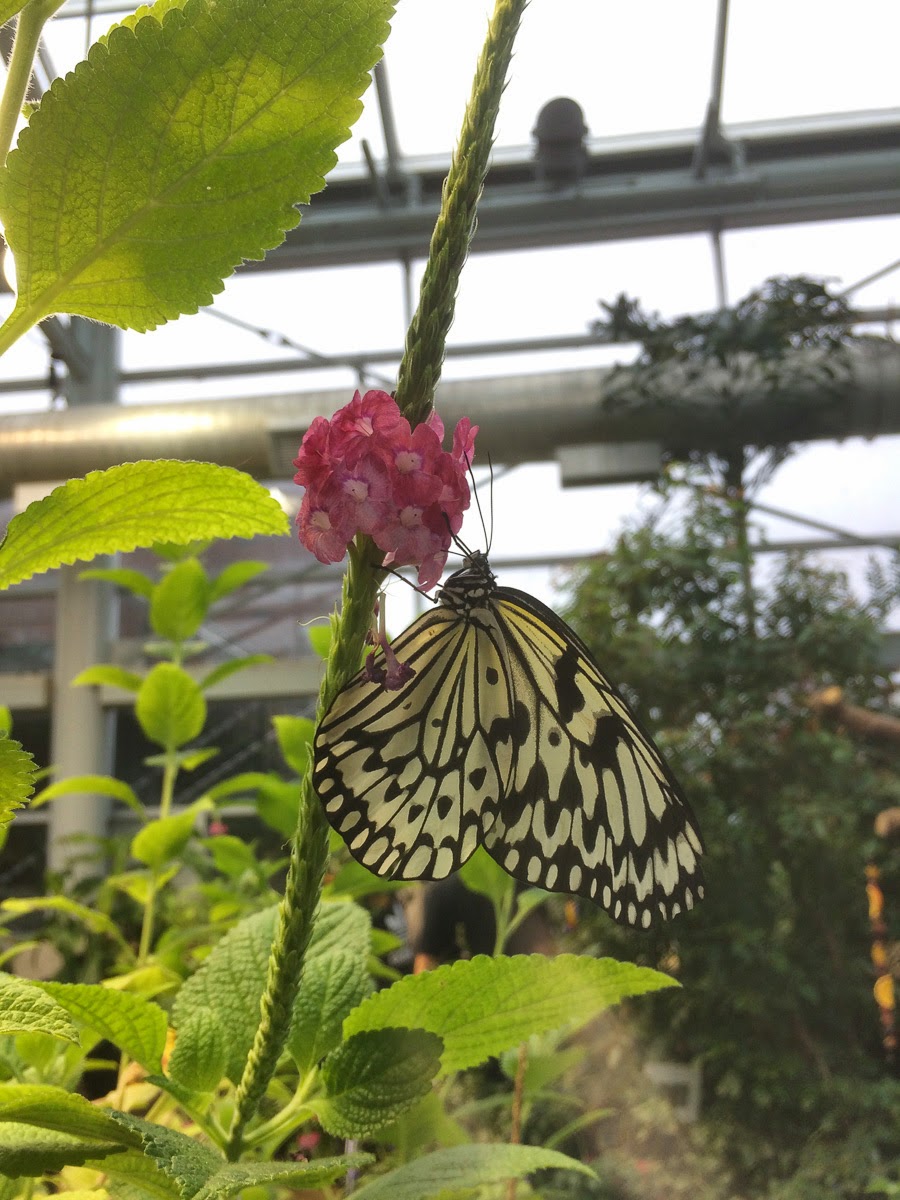 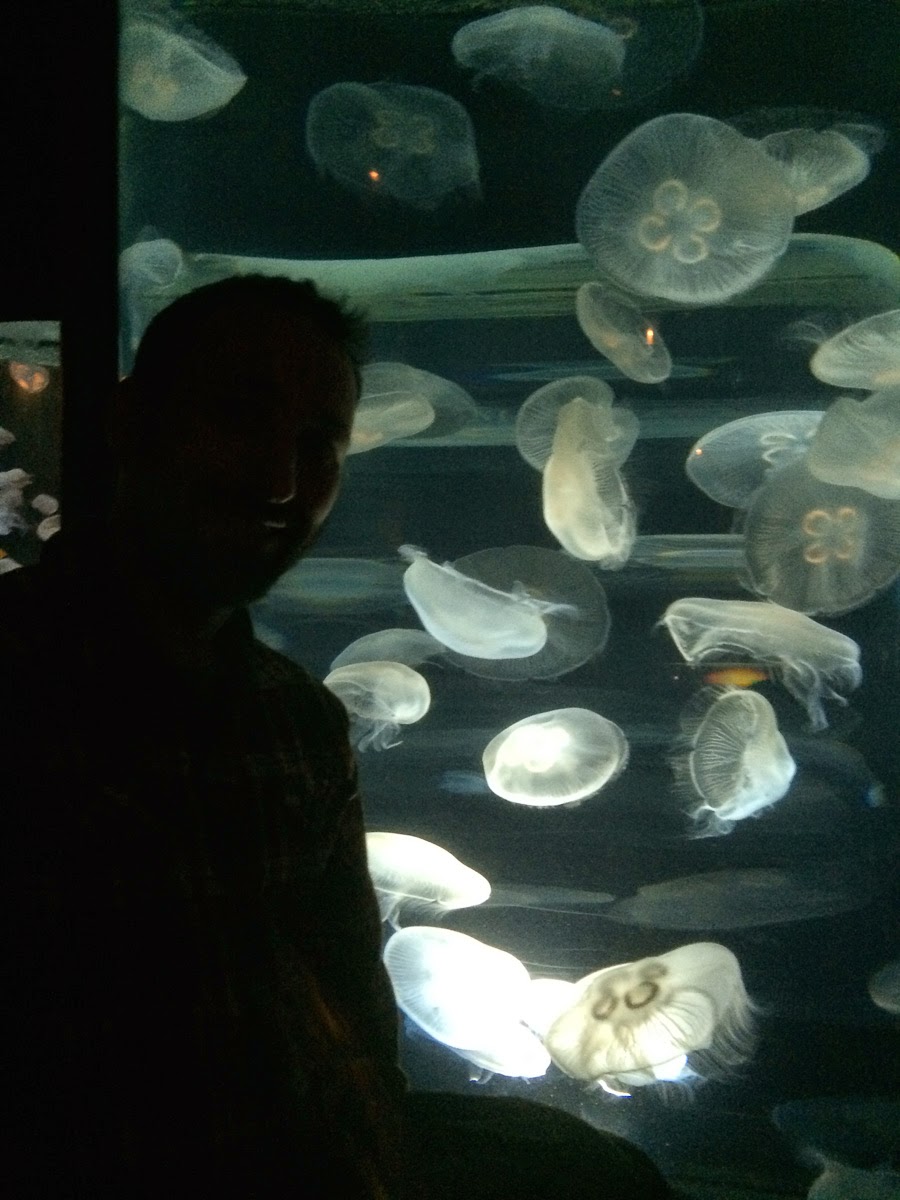 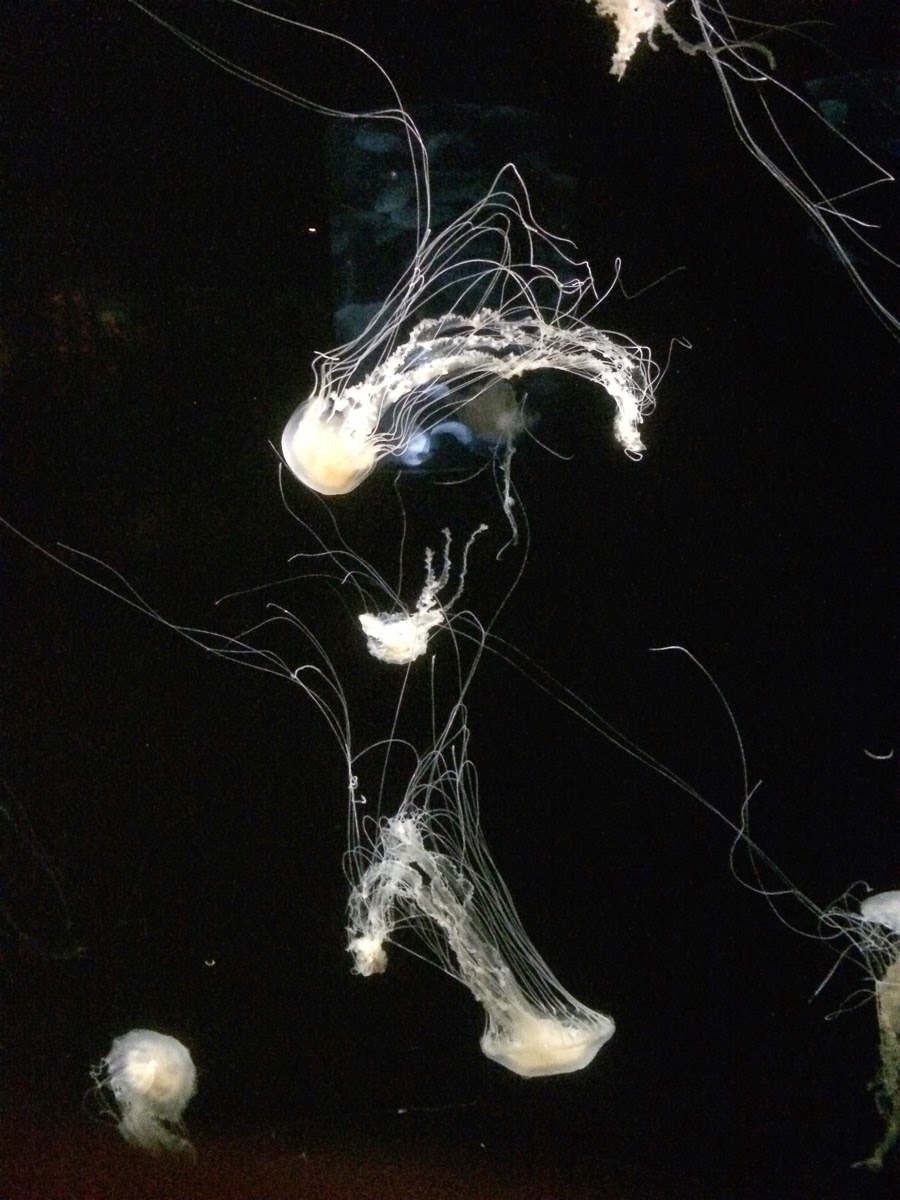 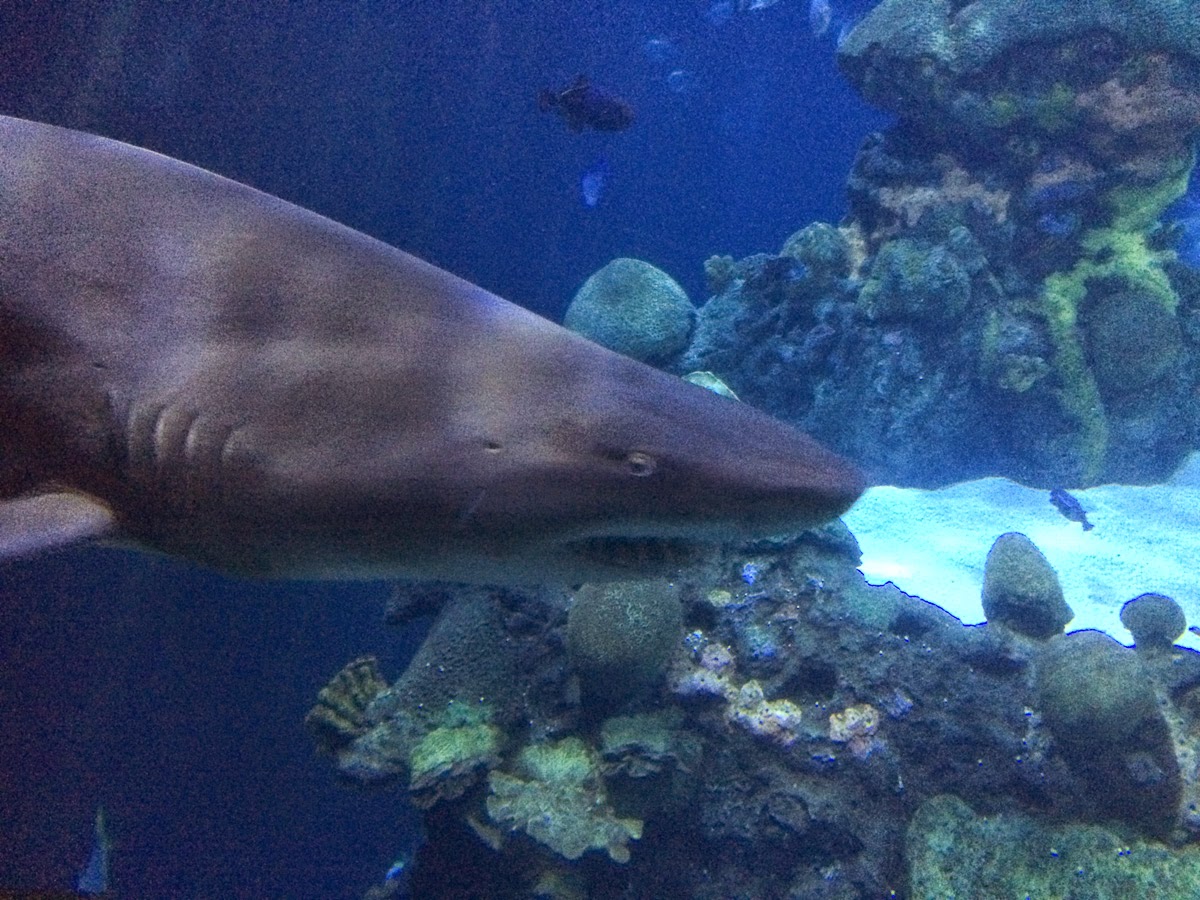 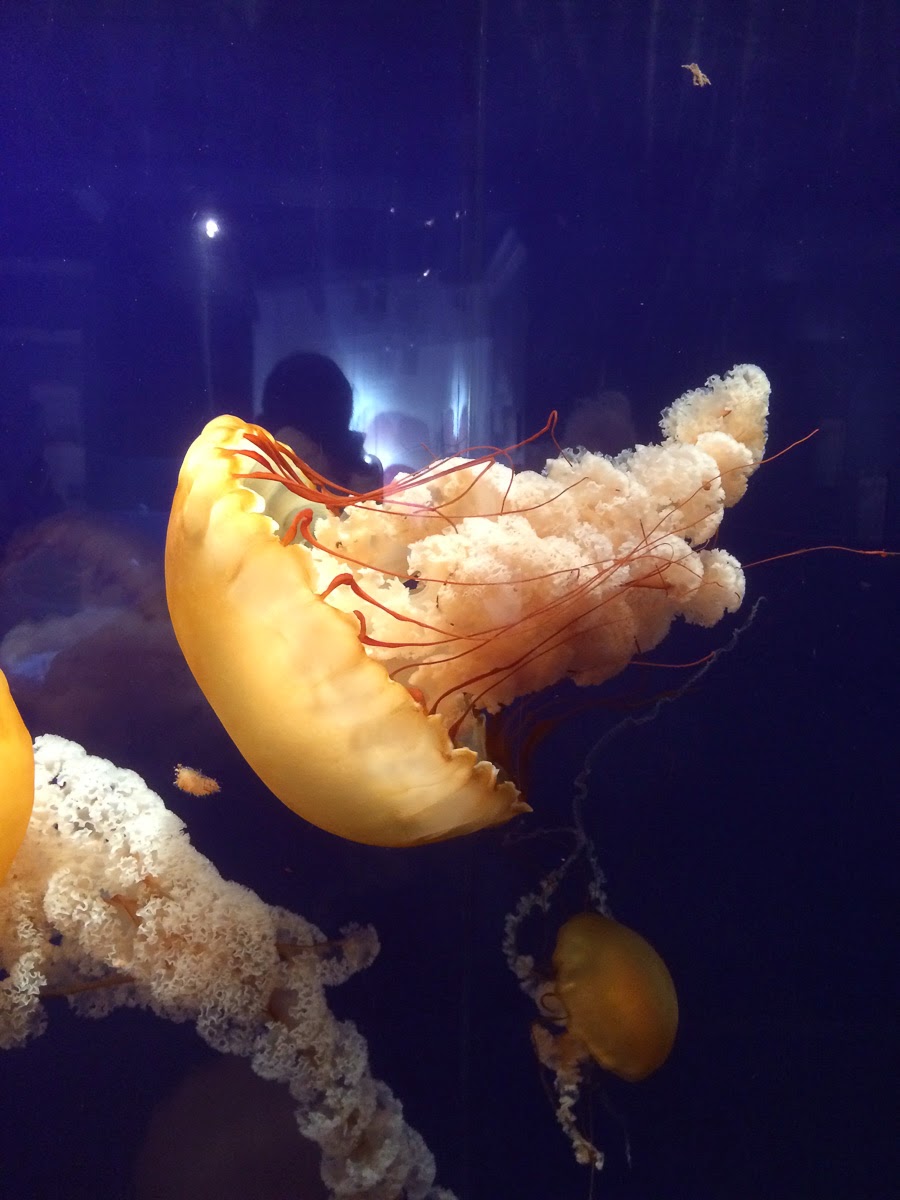 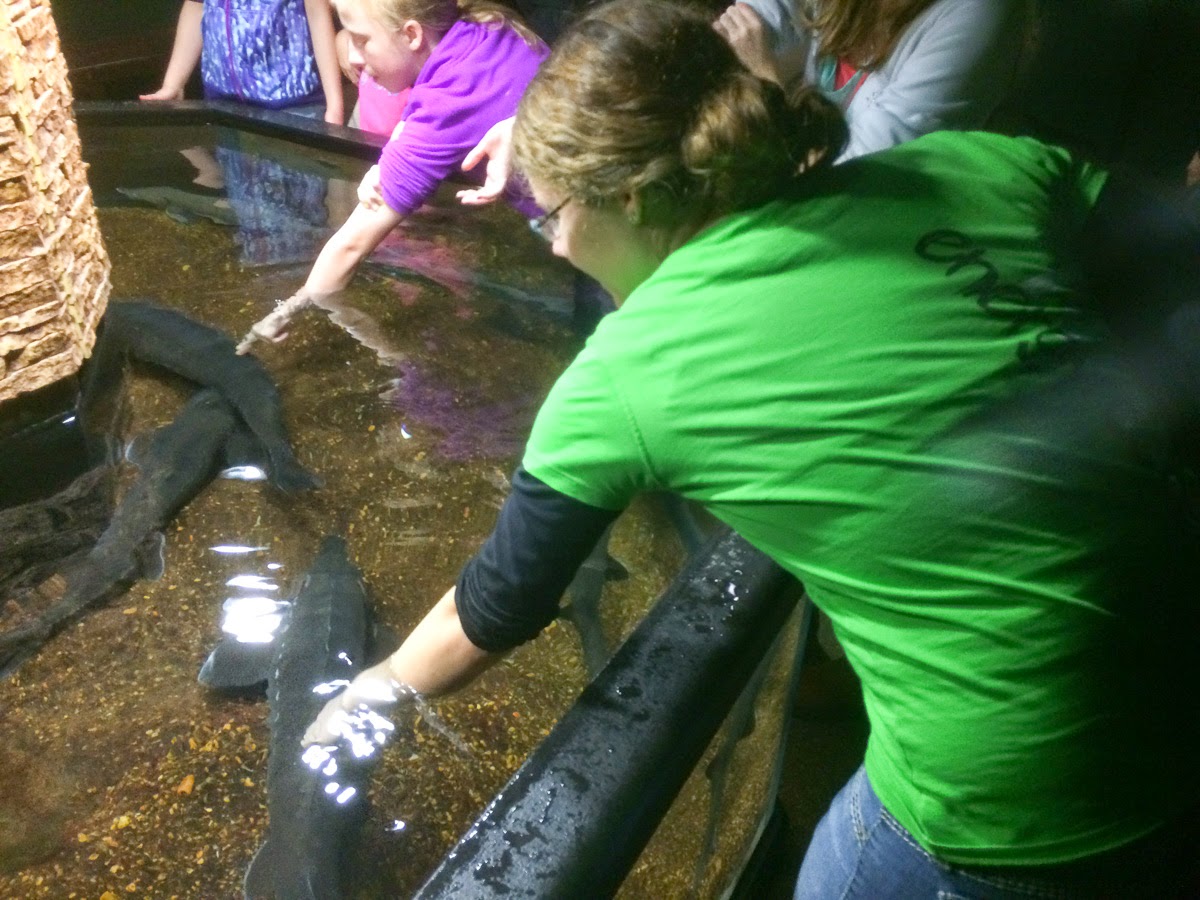