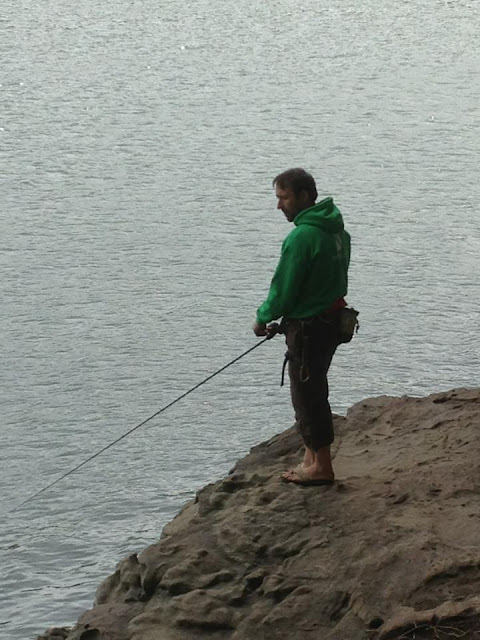 “The past two weekends of climbing have just been incredible.  The absolutely perfect weather and the peak of my spring training has produced amazing results!  Two Sundays ago, though thoroughly thrashed from climbing “Slash and Burn” (5.12d) and working the techy and crimpy “Buzz Kill” (5.12c), we headed to Summersville Lake.  The weather forecast was like 60-70% rain and we had a slight drizzle during the night.  I had trouble convincing my Bro Ryan to do the lake…(There was talk of the pink problem on the mushroom wall at the gym)  Clearer heads prevailed and I promised Ryan a subway sub (which he didn’t demand after the day of climbing!)  When we go to the cliff – the “Gun Wall” which is typically wet two days AFTER a rain was dry!!  We were stoked.

For years, through college, I would come to Summersville lake and just beat my head off of the classic route “Apollo Reed” 5.13a.  A 70? foot desperately overhanging pitch which climbs mostly V2 and V3 jugs to a distinct two boulder-problem crux at the top.  With my recent weight gain, I figured I’d warm up on the route, climbing until I got pumped, take, then work out some of the moves…well.  I got to the crux and I wasn’t even pumped!! Not even the slightest bit so I figure – what the heck!! and fired the first crux easy.  I had never actually done this move on the go and had only actually stuck it maybe half a dozen times off the hang-full recovery…I was like…woah!!  The next move likewise I had maybe done once or twice off the hang and though I had to try a little bit, I stuck it too!!!!  The last two bolts are pretty cruiser though people have certainly blow it on point, but I was hardly pumped.  I casually took it to the top – utterly shocked that I climbed it!!

This past weekend, I managed to get 3 days of climbing in and Friday was arguably, my best day of climbing ever!!  I climbed at Area 51 with my friend Tim (see the Rocktown cover photo.)  Area 51 is a cave basically, with incredibly steep roof climbs!  I had 3 projects there:  Made in the Shade (5.12d), Cage Match (5.12c) and a route I bolted, but Mike Williams sent called Skin Job (5.12c).

I warmed up on Made in the Shade, easily climbing past my high point sending the crux as a warm-up. I wasn’t even pumped, but was chalking up on the “billboard crimpers” when my crimper blew and I fell!! The last move is like – one more punch move but basically, I had done the crux!  Darnit!  I wasn’t too worried though and got back on the rig and sent it!

Next up was a really intimidating “kung fu” pitch – aptly named Catch Match.  This route hits pretty hard right off the deck, climbing through the steep roof on good jugs.  The crux hits pretty early and involves a gymnastic knee bar move and a sorta “just go for it” sideways move to a jug, then basically a sketchy chimney rest.  From the rest, there’s a steep blind roof move, then…guess what…you have a mid range 5.11 crack section to do!!!  I had previously fallen twice on red point (last season) on this crack section, but using new fangle dangle crack techniques (I put my foot in the crack), I did it easy!  Super stoked.

The final pitch for me for the day was a route that I had bolted last spring.  I did not put a project tag on it and had considered it an open project since I couldn’t do it, but I figured..well since I’m having a good day, I should try it!

Skin Job 5.12c is a pretty epic route that is what…maybe 12 bolts or so?  Its long and definitely involved.  The first 1/3 of the route climbs this kinda crimpy 11+ face that finishes with a really squirrely feet-over-the-head dihedral move to a full rest (this is where it cross Replicant).  When I bolted the route, I placed the bolts such that a climber on the original Replicant (5.11d trad) line could not clip any of my bolts.  Sufficient to say, the last move on the first part of my route is pretty run-out!! (but safe.)

From the rest, there is a short traverse and a pretty tough blind move – maybe 12a or 12b to a good hand-jam rest the ledge.  The crux follows.  The move is crazy!  You use the crack and a good pocket to lean out this 45 degree wall, get a so-so edge and a terrible sidepull pinch.  Paste a sketchy right foot on the arete and JUMP blindly to a sloper.  I didn’t have any high expectations but STUCK THE MOVE first try on the go!!! I was like…holy crow!!!!  All points cut and you just hold this hero-hang sloper…The rest of the route is maybe 5.10 and I was super stoked to put that one to rest!

I think we’ll end here as this post is getting long, but Saturday was a redemption day for me at Kaymoor.  Stay posted!