OK ok… I hear you.  We’ve been picking the low hanging fruit here at St. George.  But why not right?  Short approaches, lots of routes?  When we are used to 100 foot power enduro pain routes, its nice every now and then to climb on some short and comfy sandstone?

Well, as promised, I’ll talk about the routes I’ve climbed so far (or at least generalize some of them) and give my impression of them.  I think the general impressions will work the best for Chuckwalla since the routes all are pretty similar.

So far, I’ve done 9 5.12s with 8 of those being onsite (two 12bs).  The routes at Chuckwalla are nice – like I said, very comfortable holds – even the small holds are comfortable!  I found myself getting pumped on the routes, though they are only about 60 feet tall.  The climbing itself is on really soft sandstone sans patina, though thankfully, the rock doesn’t have that “sandy that comes off in your hands feel” to it.

My favorite route at Chuckwalla was “Pilgrimage” 5.12a , though I think the guidebook touts “Second Coming” 5.12a as the classic of the grade/region.  I found that “Second Coming” was sort of ambiguous (forced) at the top.

The low crux is just that – a low crux – basically a boulder problem through longer reaches on good to decent holds with a couple not-so-good holds thrown in just to keep the grade.  The route verts out then climbs through a roof with some decent holds and some slopers, with a good rest.  Then it gets ambiguous.   Directly above the climber is this awesome prow/arete feature (with the right hand side being the arete) and some obvious holds up the prow, though a few feet off left is a big jug and a ledge (through which the route to the left climbs.)  I decided I would take the proud man’s route and climbed directly up the prow for me – which felt like another 12a crux (if there is such a thing on the wall.)  After watching several other climbers, though it seems like most folks opt for the easy way out and just do the ledge move…oh well.

To me, the king line on the wall in the 5.12 range was Pilgrimage

The routes starts right out with a difficult boulder problem two small pockets (small but 1/4 to 1/2 pad) to a good hold over the roof.  From there, the climbing backs off considerably, though is maybe continuous mid 5.11 climbing with some “tenuous” moments.  What really stood out to me on this route was the consistently excellent movement and variety:  Two awesome underclings – one for each hand, some big slopers…everything that a climber likes in his nice sandstone 5.12as!!

After climbing at Chuckwalla our first day, we decided to continue on the sandstone theme and check out Turtle Wall.

Everyone talked about it “only being a mile” but dude.  A MILE….A MILE is a long hike and it was :(.

Though the climbing was worth it. 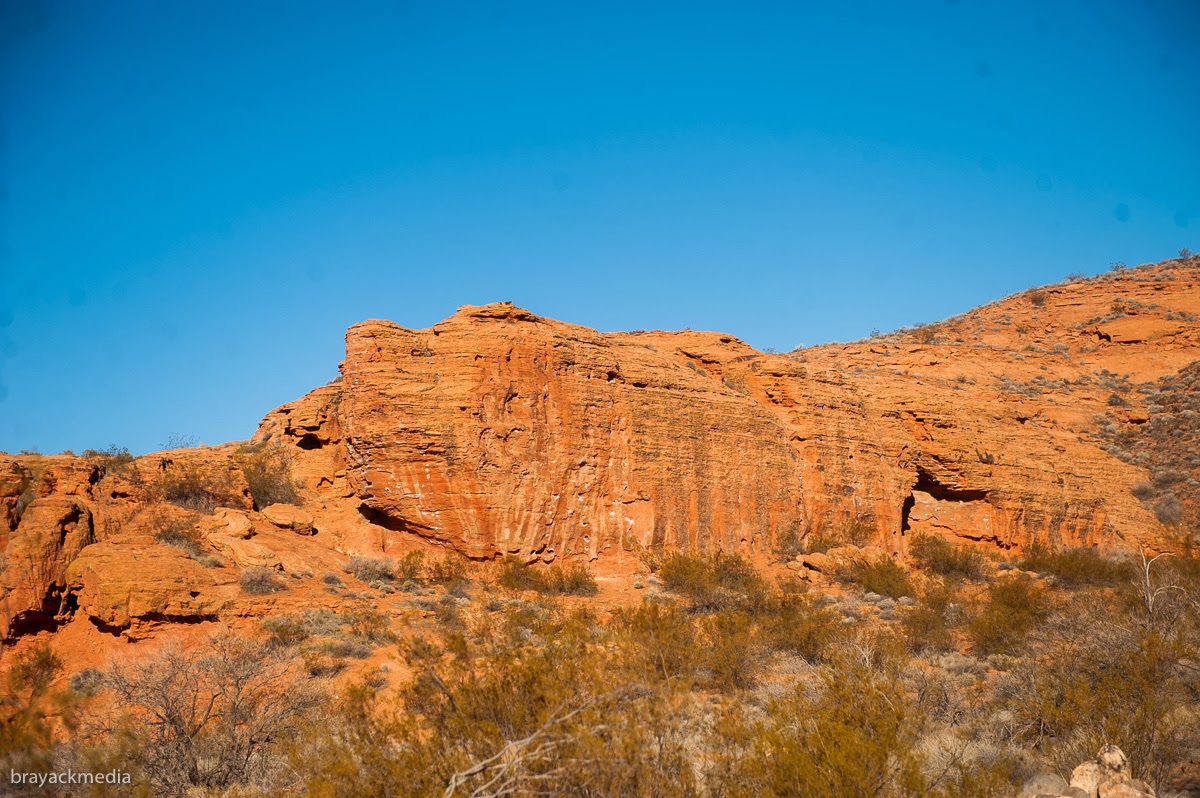 We started right off “warming up” on what felt like the hardest route of the day: “Knuckle Bones” 5.10c.   I think its more like 12a!!  After that, we headed over to the “Turtle Cave” and I proceed to climb every single route sparring “Pinching Bird Poop” in the sake of time.  The routes in the cave are actually quite awesome.  The mouth of the cave slants up at a 45 degree angle, but the routes all traverse “uphill” making them longer.  The natural lines indeed follow the angling up hill so it is awesome!  The stand out lines for me were “Farmers Market” 5.11c, Banana Dance “5.11d” and “Dancing Fox” 5.12b.

is suppose to be the “classic” in the cave once again, but I found this route to be forced “ambiguous”  At the well defined “crux” the climber can force themselves out left “where the bolt is” or climb straight up past obvious (and chalked) holds, then traverse left to skip the crux.  I decided I would play by the rules and climbed left through the forced crux and though it was forced, it was quite cool and kind of difficult!

I thought “Farmer’s Market” was much cooler.

This route is on the right side of the cave and starts at the base.  It does a few slab moves, then immediately launches into a steep roof with big moves between good holds and some pump.  A short little rest leads to the crux which is a pumpy and big move left (I found a heel-toe cam to smooth it out some) then you pull a ledge and voila.  The rest of the route is kind of dumb.  You are standing on an obvious ledge and should be done, but instead you have to kinda sketchy traverse left maybe 10 feet to a really difficult-to-clip anchor!  I could reach it.

Now this route is cool and with the steep cave floor, you can inspect the entire route from the ground.  The crux is basically the first real move – you set-up on some so-so holds then grad some bad ones.  I could hardly hold the holds so I dynoed for the “jug” and caught it – both feet cutting and hero swinging one arm.  I though to myself….man I hope that was the crux!  It was!  The route continued to climb through some steep terrain with big moves between good and kinda good holds, but it was short and over fast :).

I finished the day on “Tortuga” which is AWESOME!!!

This route is AWESOME!!  Seriously.  It was worth the heinous hike just for this route.  This route is on the front face and when I climbed it, it had just ducked into the shade, so no photo (sorry guys).  This one stuck with the general theme of the “crux being right off the ground.”  I really liked the opening boulder problem on this one.  I couple good holds lead to a vertical finger crack and what the tick marks said was a big move out left to a sidepull jug (long reach).  I figured I’d be all cute and skip the big move and just do a finger lock in the sidepull and reach to the big ledge.  Totally worked!  It was a nice finger lock, though a little rattly…with a good foot and I was able to reach the ledge.  On the way down, I did the other sequence and it was definitely “BIGGER” but about the same grade, though I think the finger lock is a skill that most sport climbers should spend some time learning!

A few things that I have noticed the climbing here:

1.  Routes that have big reaches (reachy) through good holds get a lot of stars.  So if you’re short, I’d avoid the high star routes.

3.  this place eats ropes.  I brought a brand new rope and with the prevalence of anchors being “over the slab” this place really takes a chunk.

And with that I’ll leave you.  Stay tuned for my route-by-route spray-a-thon of “The Black Wall” a basalt climbing area half a mile from Turtle Rock and Chuckwalla “ok maybe a mile.”