What do desperate climbers do when the past umpteen weekends have had a crap-a-delic forecast?  Play hooky and make Friday the new Saturday!  While our last-minute decision to leave a day early made for a hectic start to our earlier-than-normal weekend, it was well worth it for us all – and we got plenty of rest on the back end of the weekend to prepare for the upcoming week…I think I could get used to this strategy! 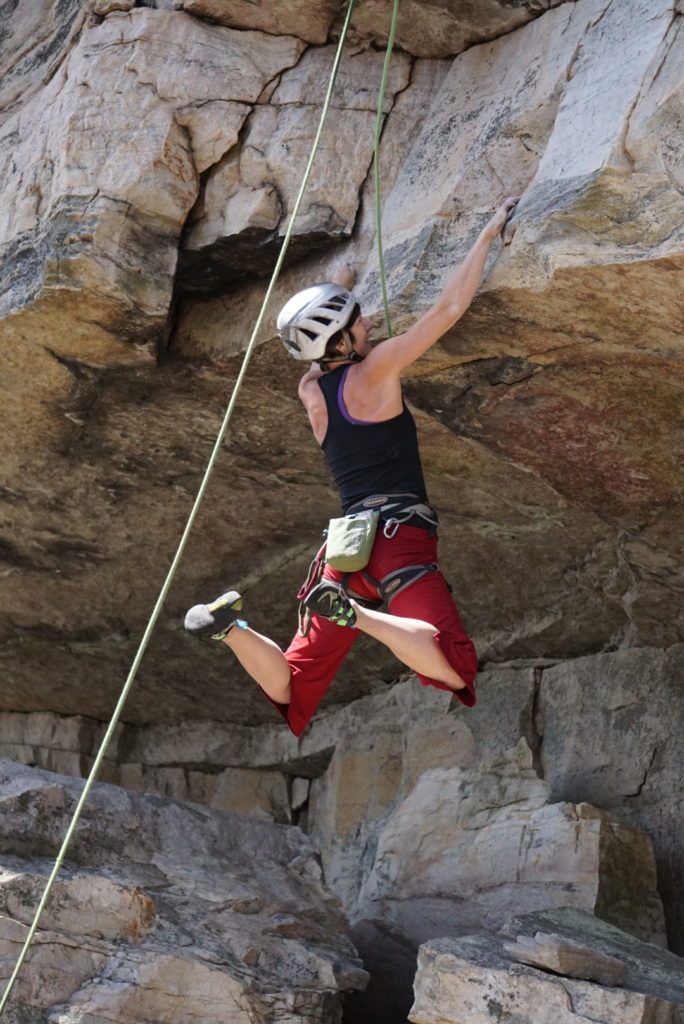 Burly jump start of Headbutt 11d…cool pic, but no send.

While the New was beckoning to me like a singing siren to a delirious sailor, we ended up going to Hidden Valley so CragDaddy could get a crack at his project from last year before the weather turned too hot.  He’d been working on the 13a slab start to Spurs, a line more commonly done as a 5.9 hand crack to an awesome 5.10 jug haul.  Last spring he was able to link much of the opening crux, and after jump training all summer, was able to get the dyno crux at around 50% success rate during the fall…but then just couldn’t put the lower moves together.  But thankfully, it all came together for him this time around, and he earned his ticket to the 5.13 club in fine style!  We got a little bit of video of the send – check that out here. 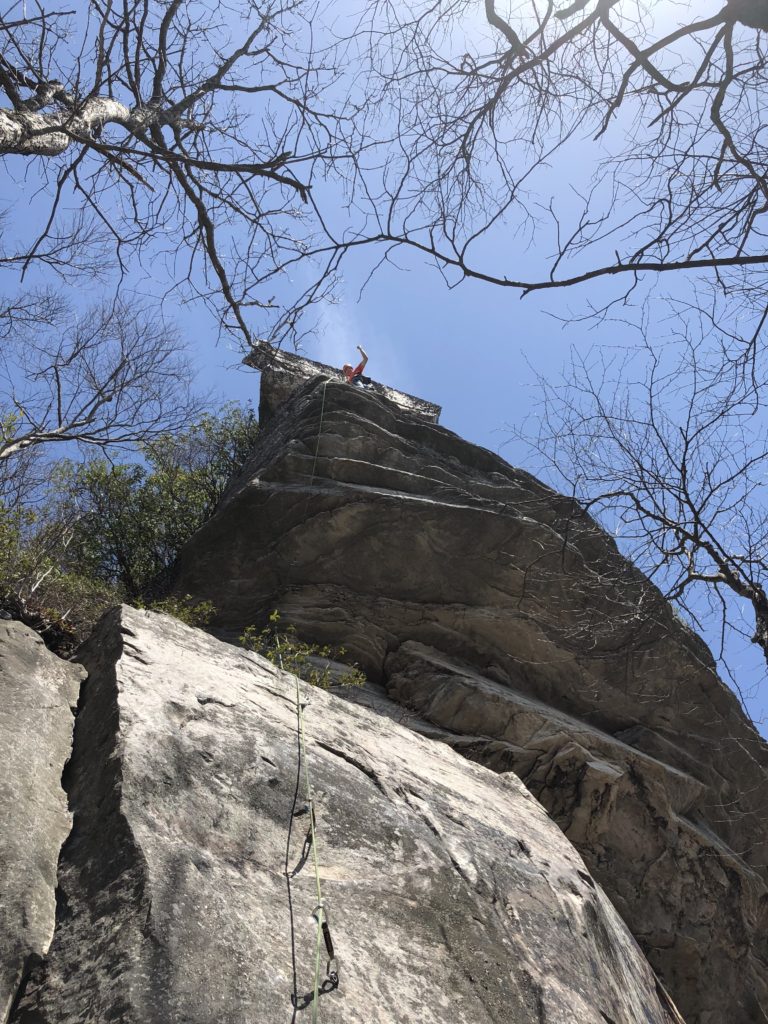 I’ve got nothing on the dyno, but lucky for me, CragDaddy was done by mid-day and we had the rest of the afternoon to spend at the SNL wall, where I was psyched to try the Coneheads Link-up line.

This line connects the bottom half of Coneheads #2 (12c) with the upper half of Coneheads #1 (13a).  The former I completed last fall, and the latter I’d never touched.  The bottom half begins with a crack, which CragDaddy and I both have pretty darn dialed at this point, as the opening crack is ALSO shared by Blues Brothers 12a, which we ALSO did last fall.  After the crack is a weird sequence around a big block, which although not incredibly hard (11a?) is fairly burly and a little bit scary cutting feet with the large brown slab looming below you.  The fear factor can be neutered with a piece of gear, then the rock kicks back into a sea of overhanging bucket jugs for a couple of bolts to intersect with the upper section of Coneheads #1.  Pulling onto the upper headwall involves a big rock-over move and long toss to a jug, followed by sustained technical face climbing similar to it’s neighbor, Coneheads #2.  The headwall sequence on this link-up is a little easier though – not quite as powerful, and not quite as long.  There’s a decent row of holds a few feet from the anchors that takes the edge off and allows for a clipping stance, thus avoiding the same long runout found on Coneheads #2. 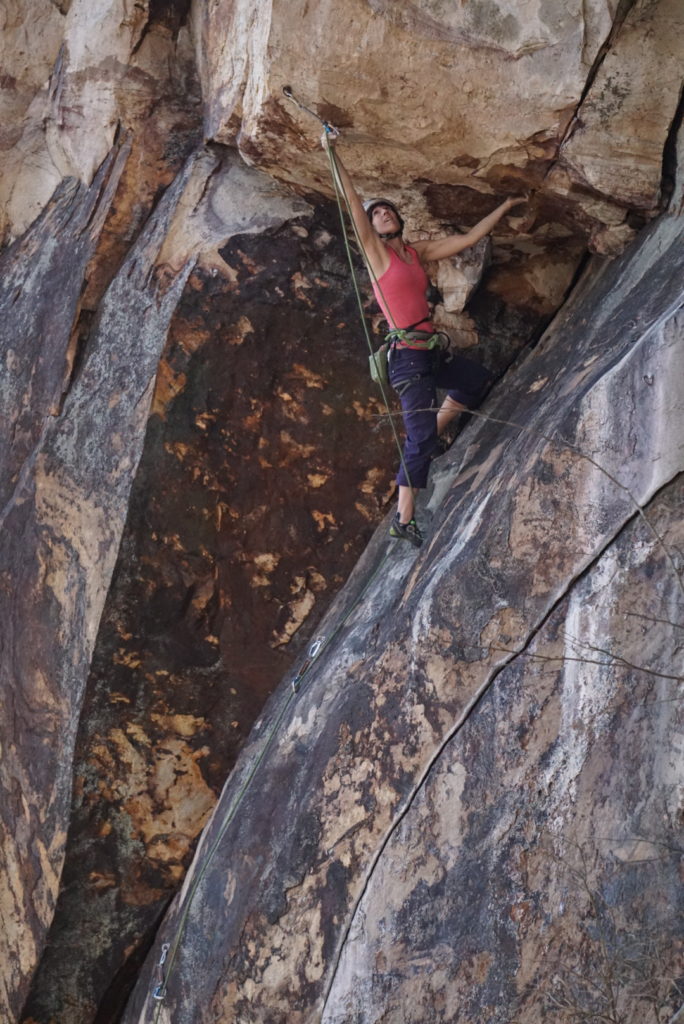 My first go was just okay.  The upper section was covered in dirty silt from all the recent rain, and after repeatedly getting dirt and lichen in my eye from trying to brush the holds at the extent of my reach, I ended up stick-clipping my way through the crux so I could save my sight and brush from above.  Although I rehearsed the sequence again when I lowered, I was pretty tired and the sequence was so much to remember.  I also wasn’t super confident about my beta for the scary block move down low, and due to the steepness of the middle section, couldn’t get back down to it to practice it again on lower.  So because of all that (and also because sometimes I’m a pansy ;)) I decided to toprope for my second go, figuring it would be easier to refine my beta in those questionable sections, knowing that it really wouldn’t matter since I wasn’t ready to send anyway. 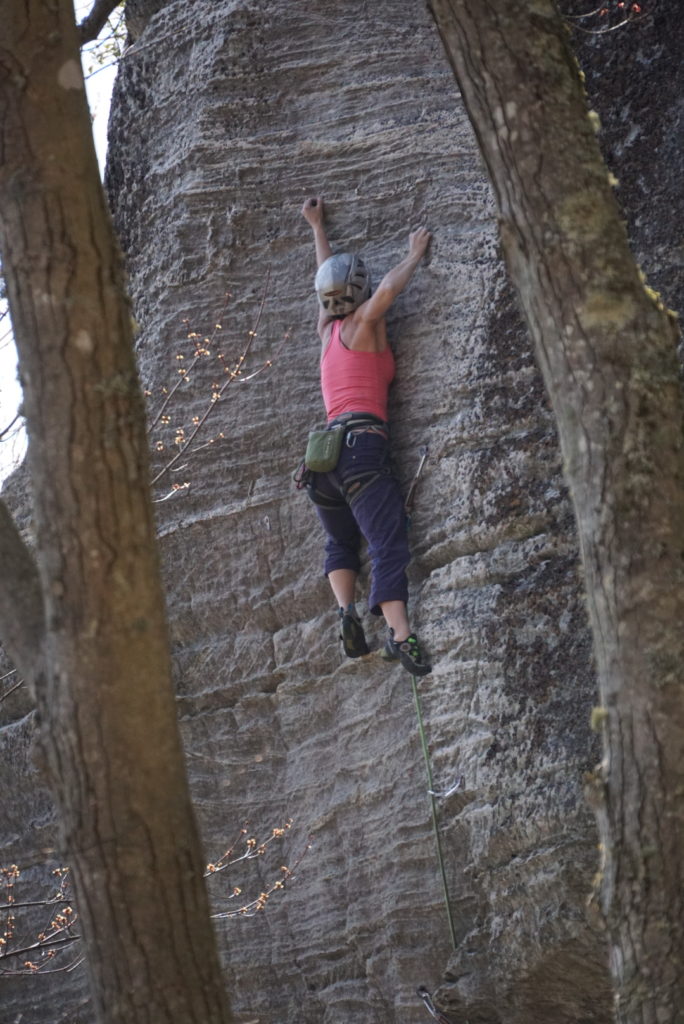 Chicken winging my way to the send…Coneheads Link 12c

But.  You guys I did it!  Only not really, because I was on toprope.  Dangit.  The bottom part was smooth sailing, and I felt like I had all day in the upper section, casually cruising through the crux (all the while bemoaning my mistake that was becoming more and more obvious with every move.)  Moral of the story – believe in yourself, and don’t be a pansy!

Thankfully though, the story doesn’t end there, as I still had enough time for one more shot.  This time the bottom part went just as smoothly as before, but by the time I got to the big rockover move, I was a lot more pumped than I wanted to be.  I barely made the move, but I shook out best I could, told myself I only had about 8 feet before another decent hold, and launched into the upper crux.

And then a familiar feeling started to creep in…you know the one.  It’s like when you’re watching a basketball game and the team that’s been winning the whole game starts making a few mistakes, and the losing team capitalizes on those mistakes.  You can feel the tide turn as the losing team begins gaining momentum, and all of a sudden the winning team starts “playing not to lose” rather than “playing to win.” As a climber I’ve noticed a similar phenomenon in the redpoint process – when that previously pumped-but-managing-to-stay-in-control state starts to unravel and panic starts to set in a little bit, there’s a temptation to shift from “climbing to send” to “climbing not to fail.” 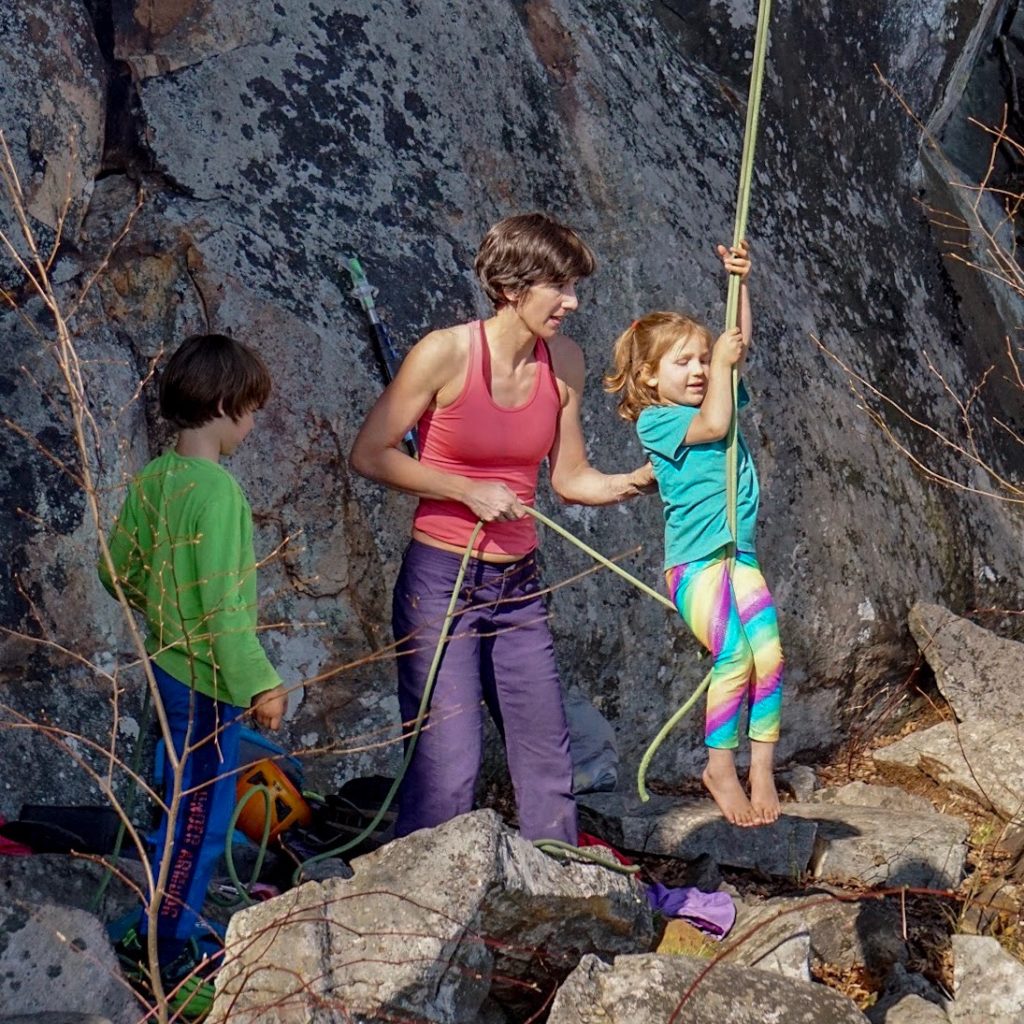 Everyone had an awesome day.

My pump clock started ticking faster and faster.  I reached up for my next hold, but it wasn’t where I thought it was going to be, and I burned several seconds (and valuable forearm juice) trying to find it.  By the time I got back on track I was red-lining, and that panicky feeling had turn into desperation.  I concentrated on my foot placements and keeping as much tension as I could, and somehow still made the long lock off to the clipping hold at the last bolt.  My inner monologue had told myself it should have been over at that point.  And it should have.  Just a handful of moves left, on thin feet, but decent edges.  But coming in hot on lap #3 of this route, the battle was anything but over.  The sun was now filtering through the trees at an angle that made everywhere I looked either blindingly bright or completely shadowed, and I couldn’t for the life of me find the right footholds for the final moves.  After a few moments of panic, I just smeared my feet and hung onto the final edges with everything I had.  The finishing jug was huge…but there was so much rope drag that I almost couldn’t even clip.  I got the rope in probably only a couple of seconds from my hands completely opening up. 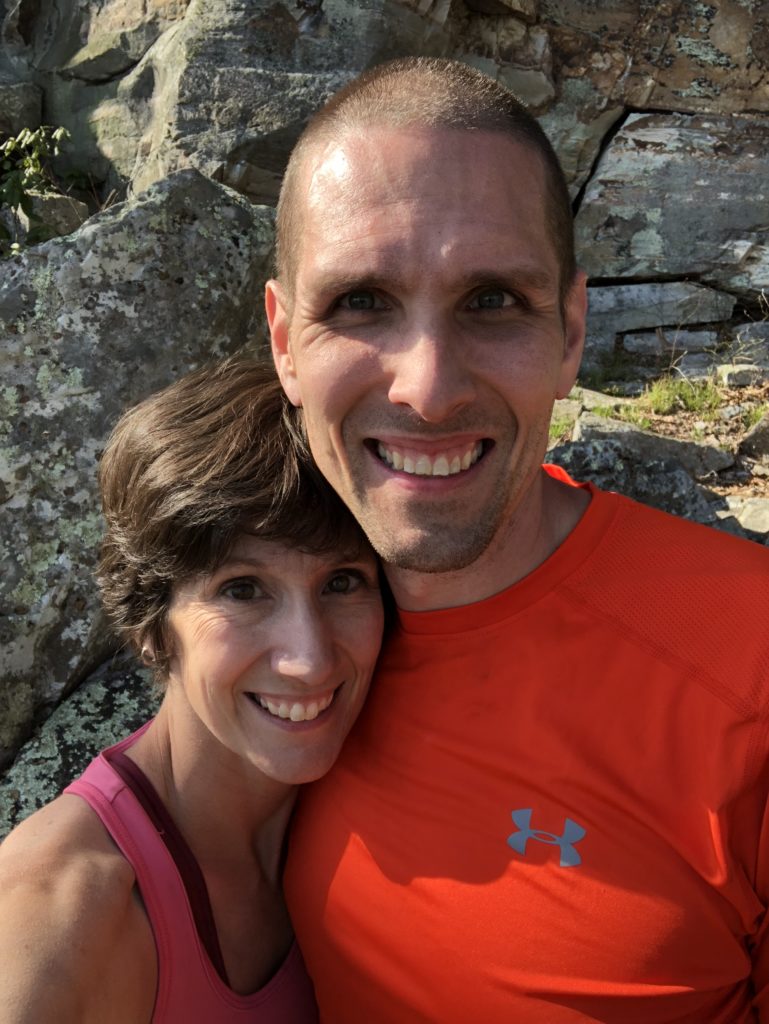 While I’ve been on harder routes before, and certainly made my share of desperate moves before, I don’t think I’ve ever been THAT pumped and had to try THAT hard for THAT long…and still been successful.  I credit that success to the training I’ve been doing with Kris Hampton of Power Company Climbing.  This was the first time I’ve ever sent 12c in a day before, and in essence, I sent it twice.  Had I not given in to self-doubt and pulled the rope to get the legit send on the 2nd go, I would have been delighted with how easily the route had gone down.  But even though it wasn’t the way I would have planned it, forcing the try hard burn at the end of the day was a pretty cool experience, and showed me that maybe I’ve got a lot more in the tank than I thought.  After all, sends that are bought by sheer will power, the ones you feel like you maybe “got away with” a little bit, are always the most memorable!

And apparently I really did leave it all out there on Friday, because when Saturday rolled around I had nothing!  My second day was filled with unsends, thrashings, and flailings of all kinds.  I’m sure it didn’t help that it’s mid-April and this was our first time climbing two days in a row all spring…thanks rain.  But on the bright side, the forecast for this coming weekend is looking like we may get a spring after all!  Fingers crossed. 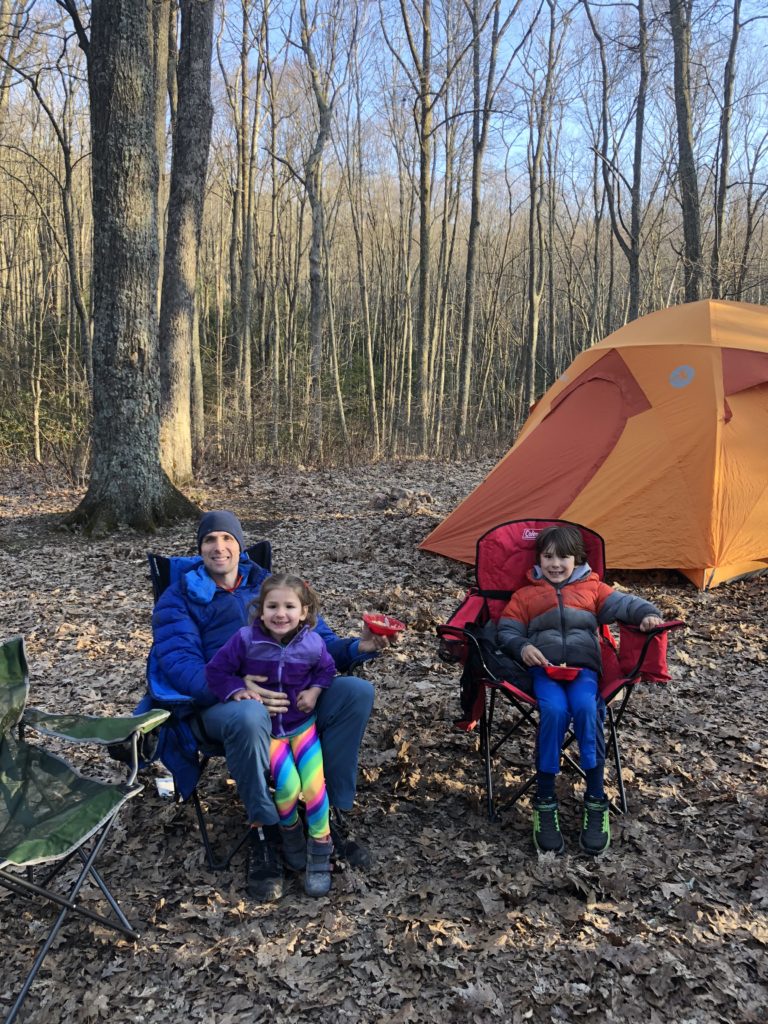 Looking forward to lots more of this in the coming weeks!