On our last trip to Ten Sleep (in 2012), we only had 3 consecutive days in on which to climb (and we were so beat on Day 3 that we only made it til lunchtime.)  So this time around, we allowed more time.  After two incredible days at Sector Shinto and Superratic (summed up here in case ya missed it), a rest day was most definitely in order. 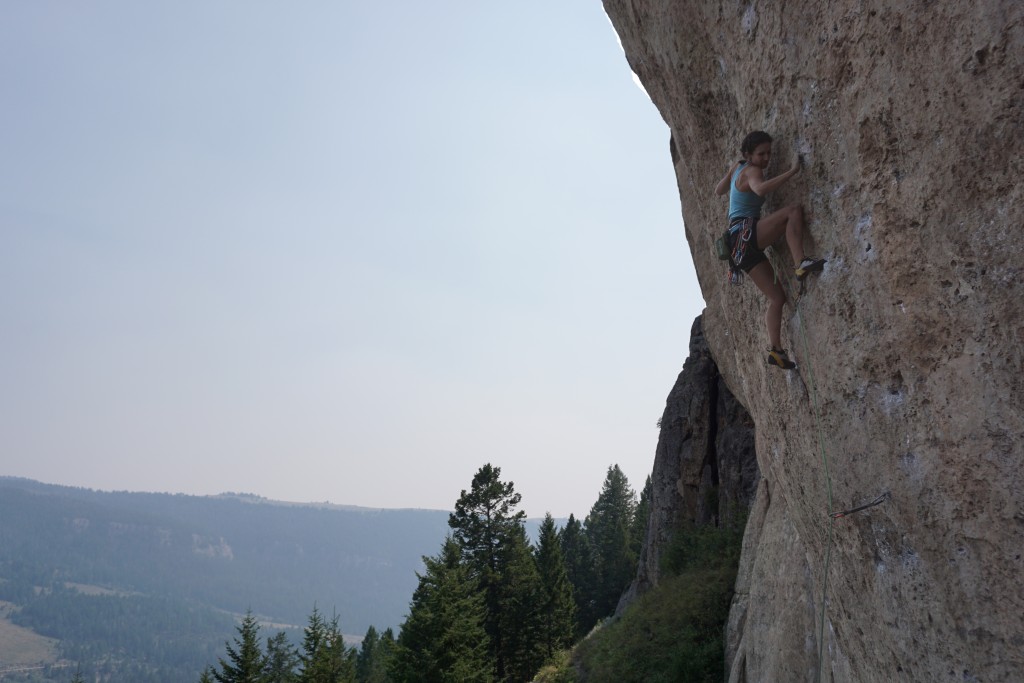 This route is called Happiness in Slavery 12b…

We started with a drive high into the Big Horn mountains to West Ten Sleep Lake, where we enjoyed gorgeous views as well as a short morning hike down to the Ten Sleep Creek Falls.  We probably could have dawdled the day away here, but even layered in the warmest clothes we’d brought, we still weren’t prepared for the 38 degree temps we found at such a high elevation.  So back down we went,where the rest of the day could be summed up by the words “sleeping” and “eating.” 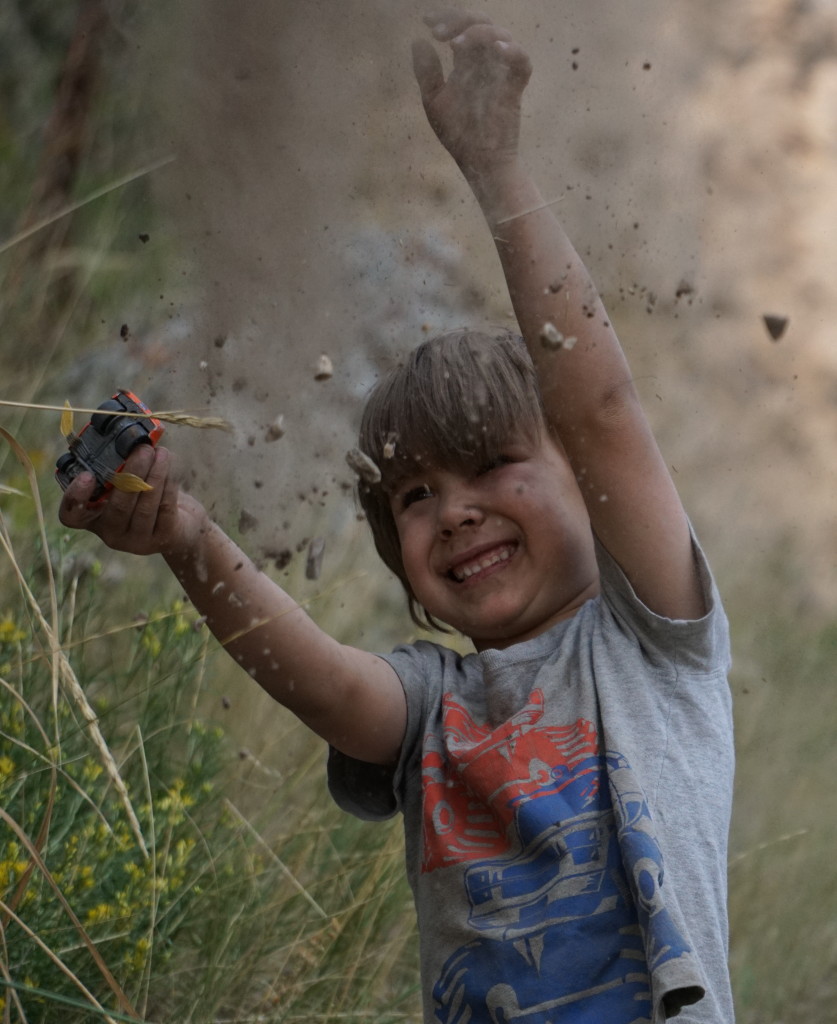 This picture is captioned, “Happiness in Dirt.”

On Wednesday morning we found ourselves back at Sector Shinto, eventually, that is.  Our creek crossing shenanigans continued, as the creek was significantly higher after the previous day’s rain.  All of the rocks to hop across were either underwater or wet, and the fallen log now featured slick, icy spots.  While Big C is normally pretty fearless, the icy log was where he drew the line (which was fine by me, since I was not particularly jazzed on toting Baby Zu across the log in the backpack either.)  We decided that the guys would cross the creek and go ahead and get up there, while I drove back down canyon and hiked up the long way with the kiddos.  Thanks to LOTS of singing and some motivational huckleberry licorice sticks I’d bought in town, we made it to Sector Shinto not only with minimal whining, but a full FIFTEEN minutes faster than we’d done it the first day (it helped that our lungs no longer felt like they were exploding at the slightest incline…)

Wyoming Flower Child 5.11d – Though it was more difficult than the 10a to it’s right, this fun little number was a much more pleasant warm-up.  The holds weren’t nearly as sharp, and the business wasn’t until just before the anchors.
Dope Shinto 12a – CragDaddy and Third Man Caleb still had loose ends to tie up with the Left and Center Shintos, I made it my mission to tick off the other starred routes on the wall, starting with the dopeness.  Though easier than the other 12’s on the wall, this one is just as fun.  A sequency little boulder problem down low guards fun 5.11 climbing to the top.  Hanging draws I botched the sequence and pitched off trying to reverse the moves, but I sent 2nd go.
Wutang’s Wild Shinto Ride 12a – This was the last 12 on the wall left for me, and it was definitely a wild ride!  A tad sharp, but great (relentless!) movement with a glory pocket right that showed up at just the right time!  I needed a send to keep pace with my “35th (5.12) on my 35th (birthday)” goal, and while it didn’t go down without a fight, I onsighted it!  (Shout out to Crag-Daddy for hanging a few of the draws for me as he was lowering down off Dope…it definitely made things easier!) 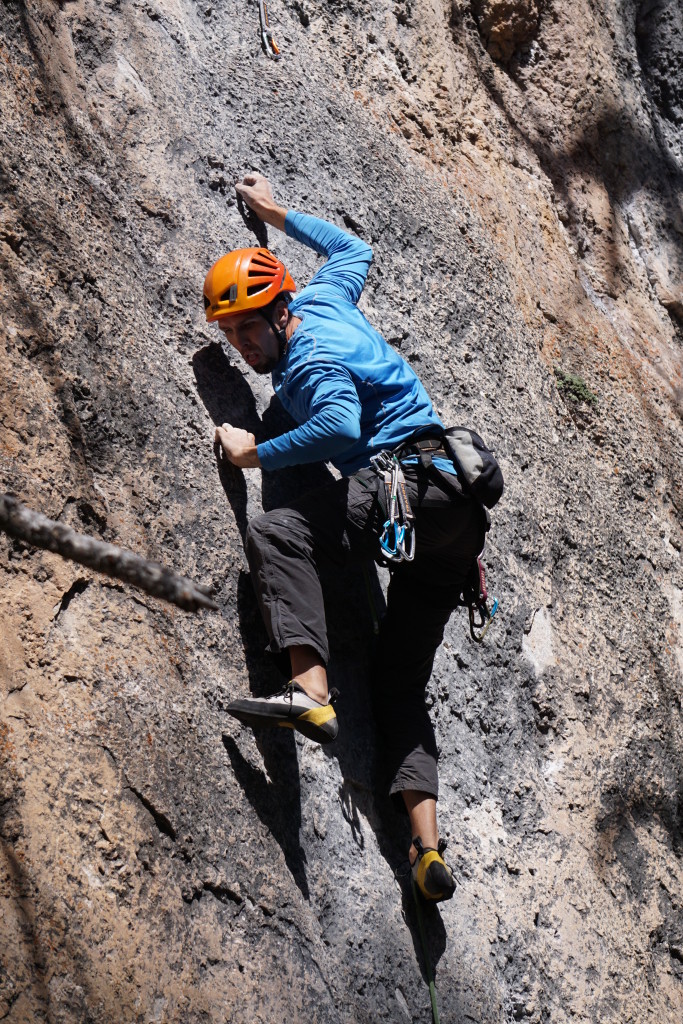 Our last day in Ten Sleep happened to fall on my 35th birthday, and I couldn’t have picked a better place to celebrate than the Slavery Wall!  I started the day with 33 lifetime 5.12’s, so I only needed 2 more to reach my birthday goal of 35. 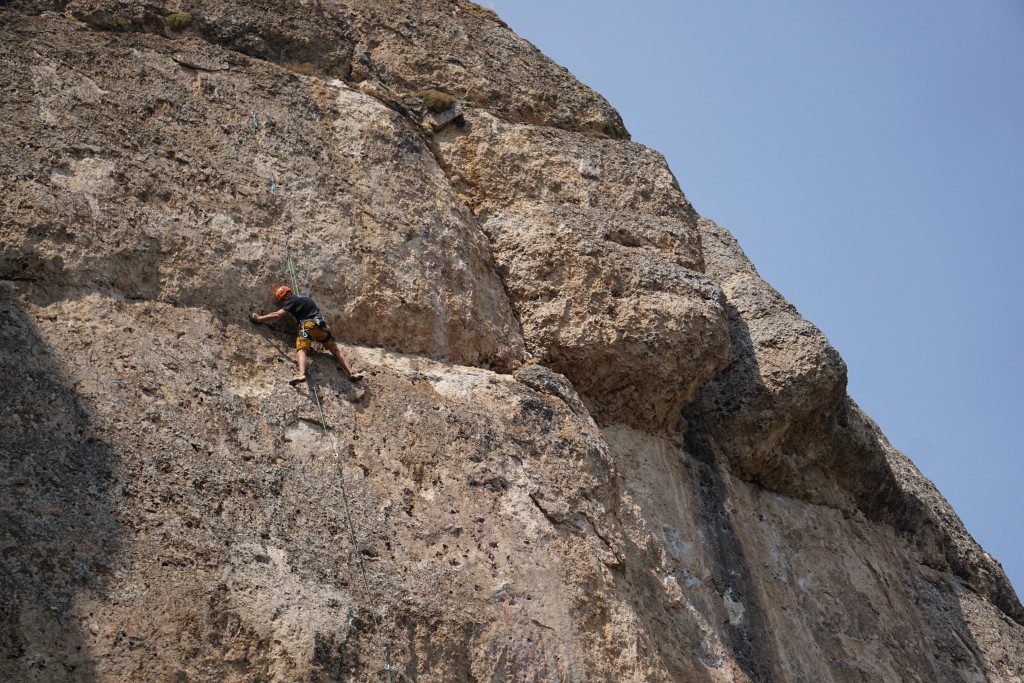 Steve sending Asleep at the Wheel 12a

Asleep at the Wheel 12a – We’d been averaging 4 pitches a day (kiddos around + climbing as a party of 3 = quality rather quantity!)  So instead of “wasting” one on a warm-up, I decided to get down to business right away.  I figured this would allow me 2 burns per 12, rather than forcing me into a situation where I felt pressure to onsight (I’d also already done the stand out warm-up for the area, Beer Bong 10b, back in 2012.)    This one was great – and the first few bolts weren’t that difficult so it ended up being a decent warm-up anyway!  There were 2 definite crux sections, but great stances to suss things out before each.  I almost punted off the top, but kept myself together enough to tick it first go!  With 1 down, 1 to go, I was feeling pretty optimistic about my chances for number 35! 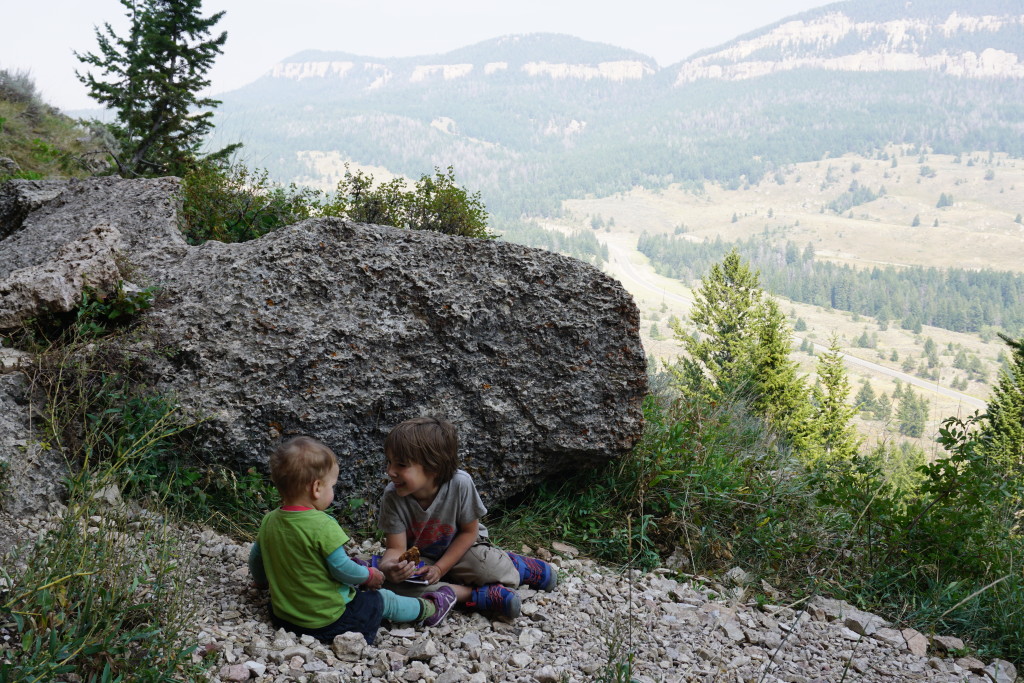 These kiddos are awesome. 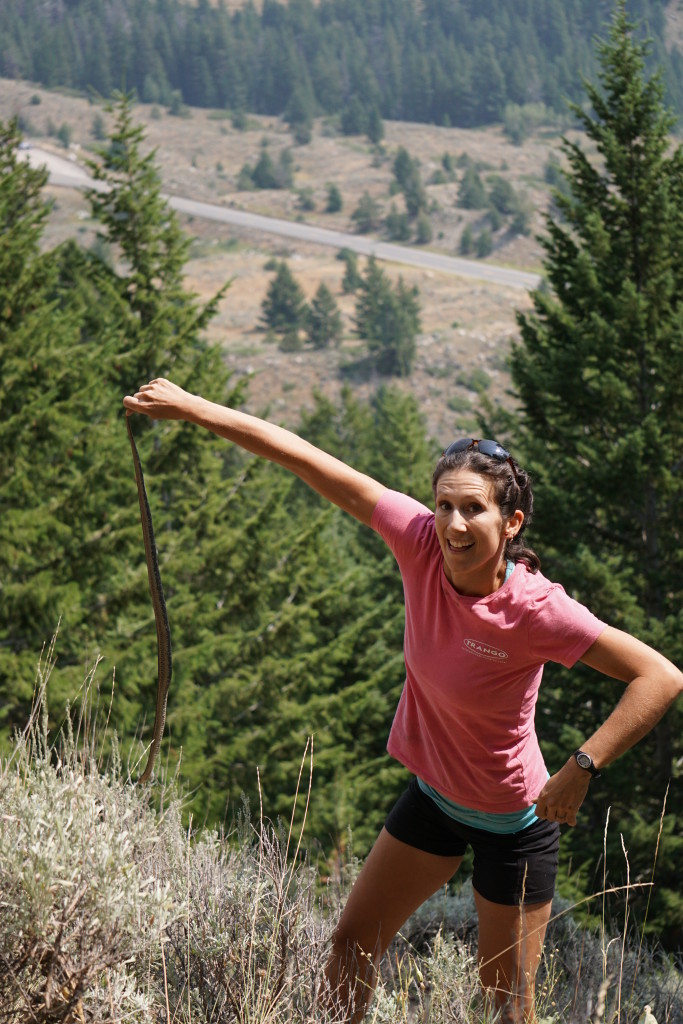 This bull snake was pretty cool too!

Strut Your Funky Stuff 12a – This one was aptly named, for both climbing style as well as being number 35!  The footwork was definitely funky, and the crux for me was finding the footholds.  The feet were actually pretty good, but since most of them consisted of small pockets that doubled as handholds, they were really difficult to spot once you moved up above them.  I wasn’t taking any chances on finishing my goal, so I enlisted CragDaddy, (who had just gotten off the route), to give me a complete spraydown of the holds in real time as I went up.  Definitely a gift-wrapped flash, but I’ll take it!

With the pressure to send off my shoulders, I decided it was prime time to hop on the area classic – Happiness in Slavery 12b.  I knew it was probably too little too late in the day (and trip!) to send something so bouldery and pumpy (especially hanging draws!), but I didn’t want to leave Slavery Wall without experiencing it.  It was hard, for sure, similar to Great White Behemoth but with slightly bigger holds on slightly steeper terrain.  I mostly went bolt to bolt, and even so I was running on fumes by the time I clipped the anchors!  I would have loved to have seen how it would have felt on a 2nd go, but I guess it’s good to leave something to come back for next time! 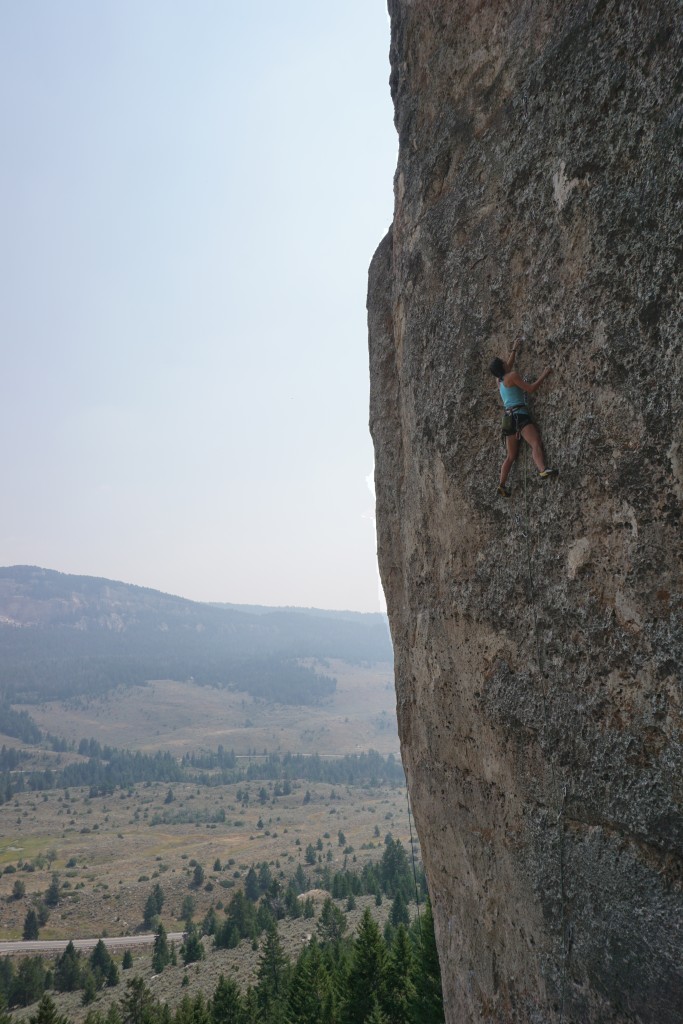 Getting funky on number 35!

What a great present!  After one 12 in Wild Iris (recapped here), and eight in Ten Sleep, I bagged my 35th lifetime 12 on my 35th birthday, woo-hoo!  Happy birthday to me!  And while the end of this day marked the end of our time in Ten Sleep once again, we all walked away pleased with what we accomplished.  Besides, even though Ten Sleep was done, we still had to make our way back to the SLC airport…and we still weren’t quite done with our tick list for the trip!  Stay tuned for the FINAL edition of our Wyoming Adventure (the one that actually takes place in Utah.) 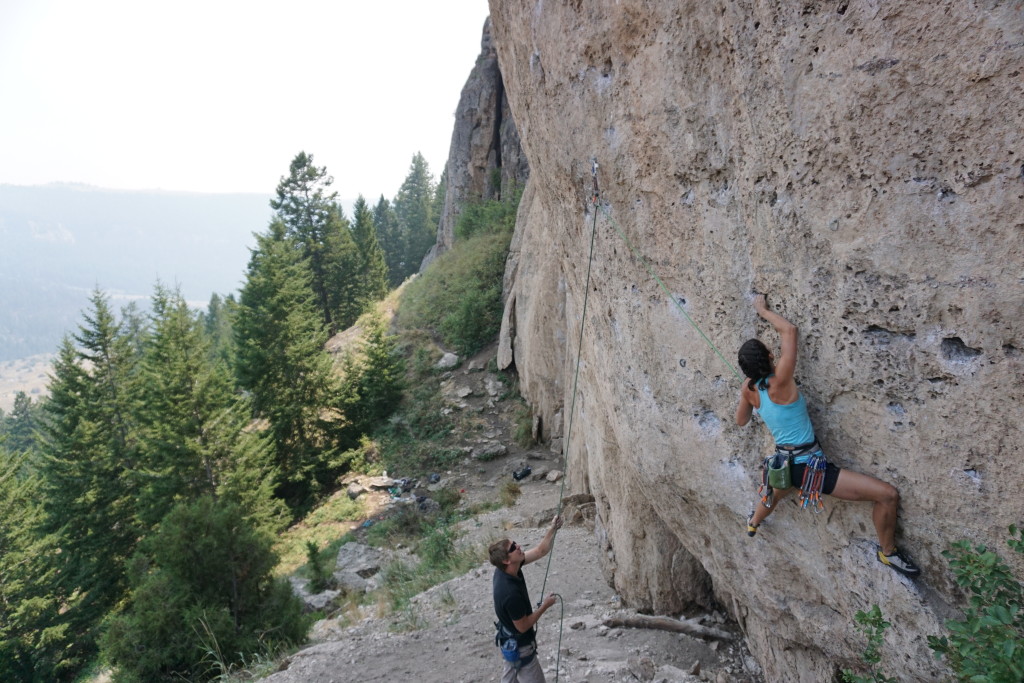 Initial boulder problem on Happiness in Slavery 12b