Our family has been eagerly, yet anxiously awaiting the start of the spring camping season.  Eager because we love waking up in the woods…anxious because there’s one member in our family that loves being awake in the woods so much that she refuses to go to sleep.  However, now that nighttime temps have gotten up in the 50’s, staying in a cheap motel seems like an unnecessary expense.  So off we set on Friday afternoon, aiming for Hidden Valley Lake, a serene gem hidden high on a ridge above the town of Abingdon, VA.  We got there with plenty of light to set up camp as well as explore the lake.  (Note:  If you have a canoe/kayak/etc, definitely bring it!  We were sorry we didn’t!) 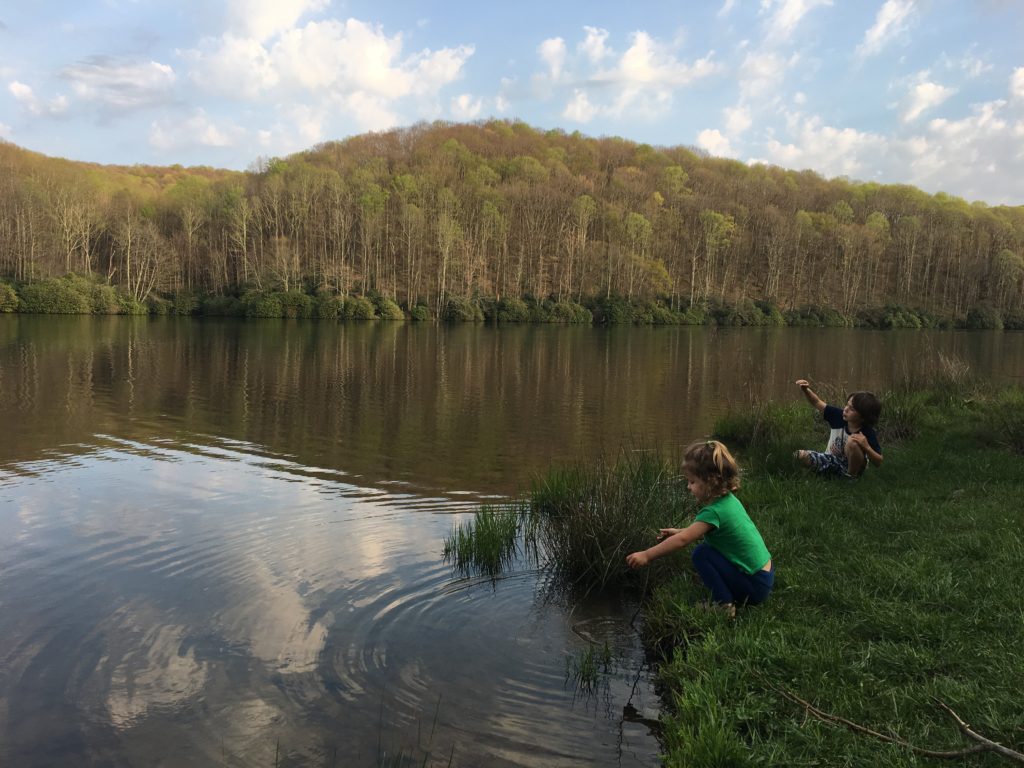 Compared to last fall and previous years, bedtime was a breeze…both nights!  And I am proud to say that Little Zu slept better than she EVER has in a tent…both nights! Oh what a difference a night of sleep makes to your morning outlook.  But moving on…because any more on that and I fear I may jinx our next trip… 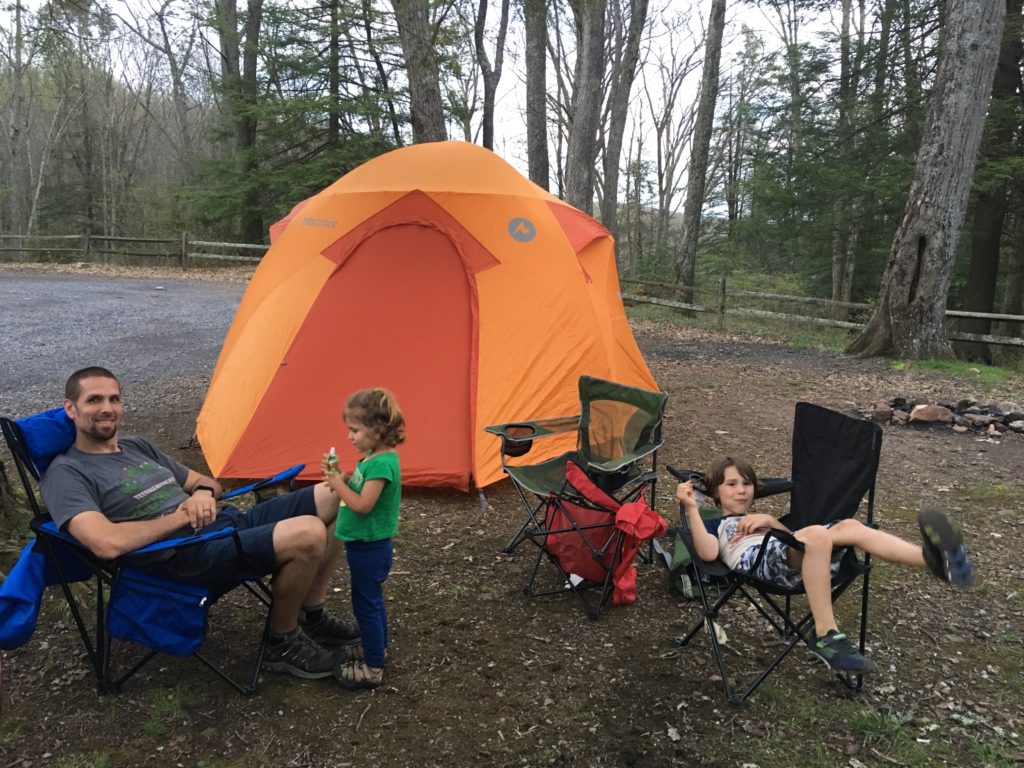 “Big Orange” is back in action folks!

We had cast a wide net for climbing partners this weekend (Climbing With Kids Strategy #86), and had one of those rare weekends where a lot of people showed up!  It worked out perfectly, however, because Hidden Valley is great for a crowd.  Saturday was pretty hot, considering the leaves aren’t fully out on the trees yet to shade the cliff, so we kept the grades down, so we wouldn’t have to try as hard (in theory, anyway.) 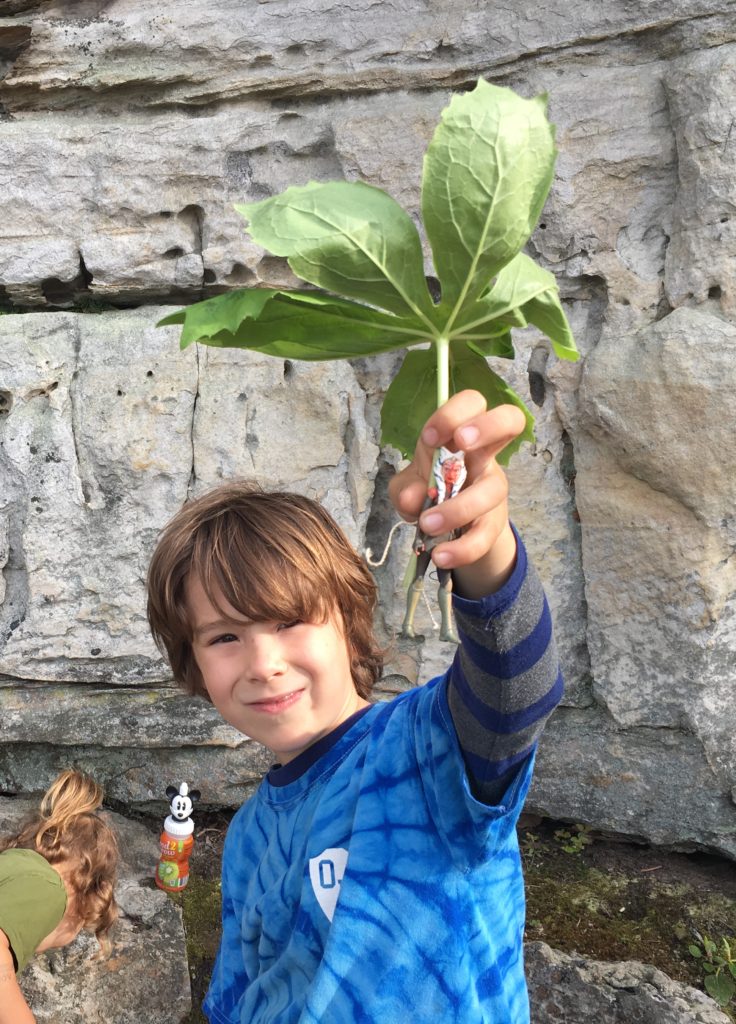 You’ll Need More Charmin Mr. Whipple 11a – GREAT route at the first wall you come to, called “Butt City.”  (Yeah the kids think that one is hysterical.)  Sequency and very committing at the crux, my first attempt I got flash pumped getting my hands out of order…2nd go send for me.
Deciduous Enema 11a – Another really good one, also at Butt City, if you couldn’t tell by the name.  Short but very steep with a really big stand up move at the top, I was really psyched to put it all together on the first go.
Primetime Players 11b – This is a variation to the popular Farley 5.9 at the SNL Wall.  The first 3 bolts are shared, then PTP breaks off left and heads to the top of the cliff (great views, don’t forget to turn around!)  The crux is pulling a bulge via a sequence of surprisingly positive crimps.  My first time up I had my fingertips on the final crux hold and just couldn’t hold on.  Womp womp.  2nd go send.
Rattleheaded Copper Moccasin 11d – This route was a very steep but very short little number that was super fun…but nowhere near 11d.  Usually I refrain from complaining about grades (see my confession below), but in this case it felt so off it might be a misprint.  Maybe it’s supposed to be 10d? Whatever the “real” grade is though, it was awesome and I highly recommend it – and certainly don’t let yourself be intimidated by the grade!!! 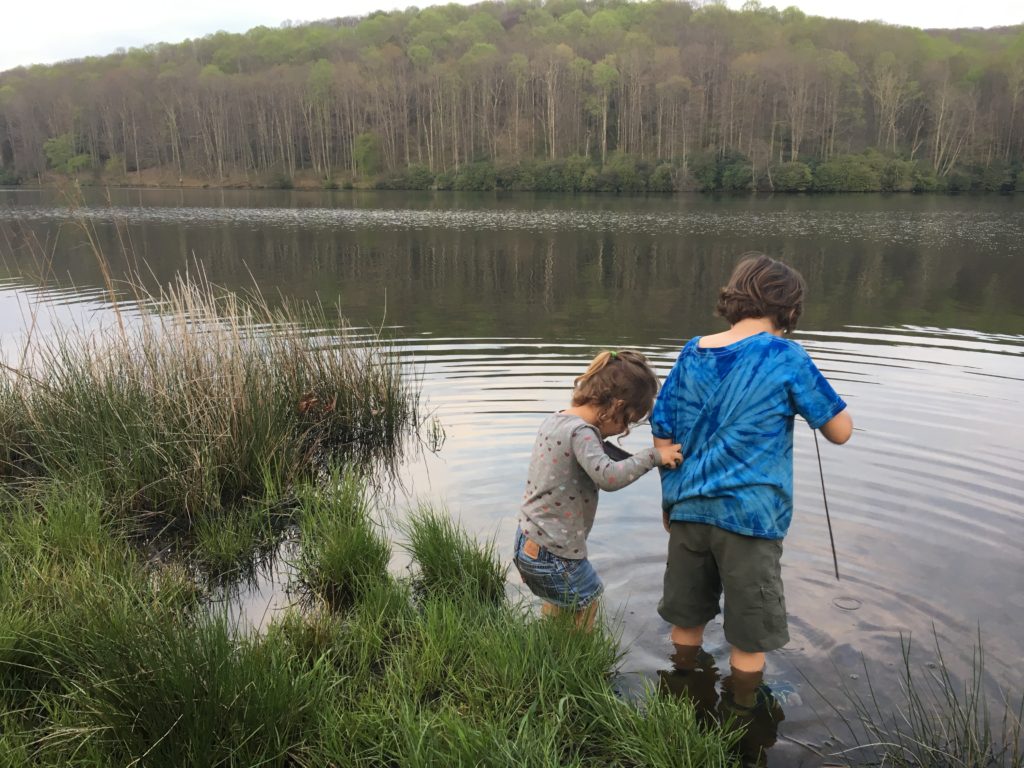 Day 2 we got out to the crag pretty early…and we were VERY encouraged to be able to each get in a pitch before any other partners showed up!  We are ALMOST in that magical time where we don’t have to constantly line up extra people!  The kids discovered a little cave they christened “Salamander Town” (much better than “Butt City”, in my opinion!) and played beautifully together while CragDaddy took his turn to hang draws on Dynamo Hum 11c. Considering my “flash” game may have been a little off the day before, I was super excited to win the battle against this one today.  (Non-climbers – A flash means doing the route with no hangs/falls on your first try, after either seeing or talking to someone else about it, as opposed to an onsight, which is a 1st go send with no prior info.) 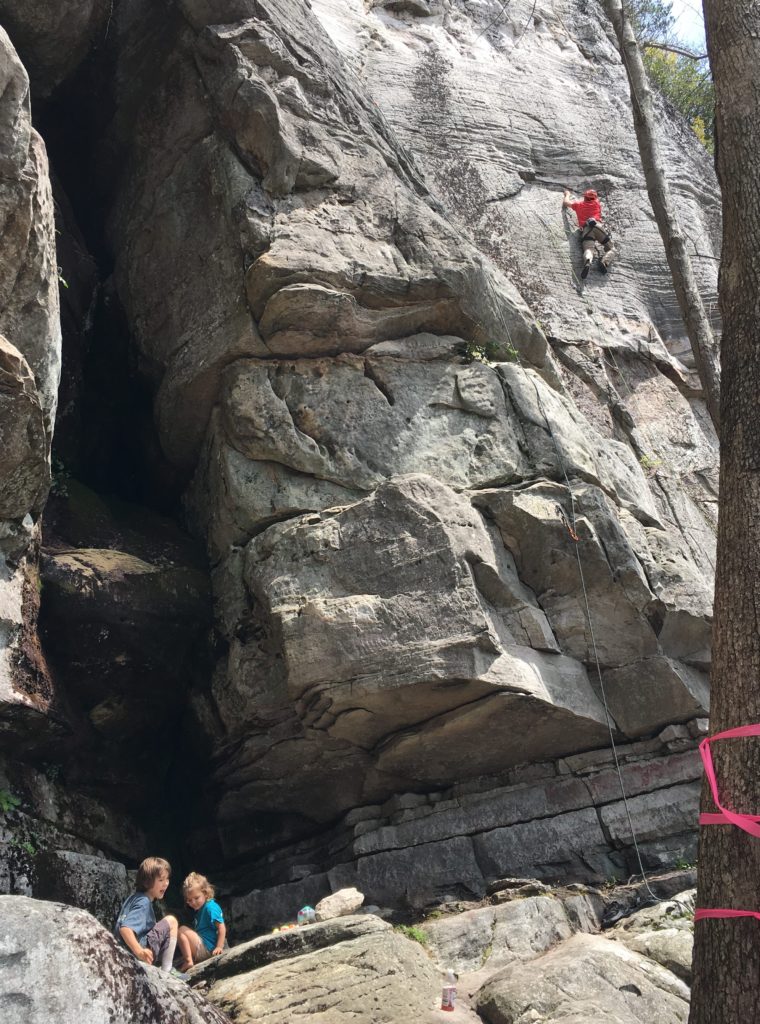 Kiddos playing in “Salamander Town” while CragDaddy tries Yabuisha 12a 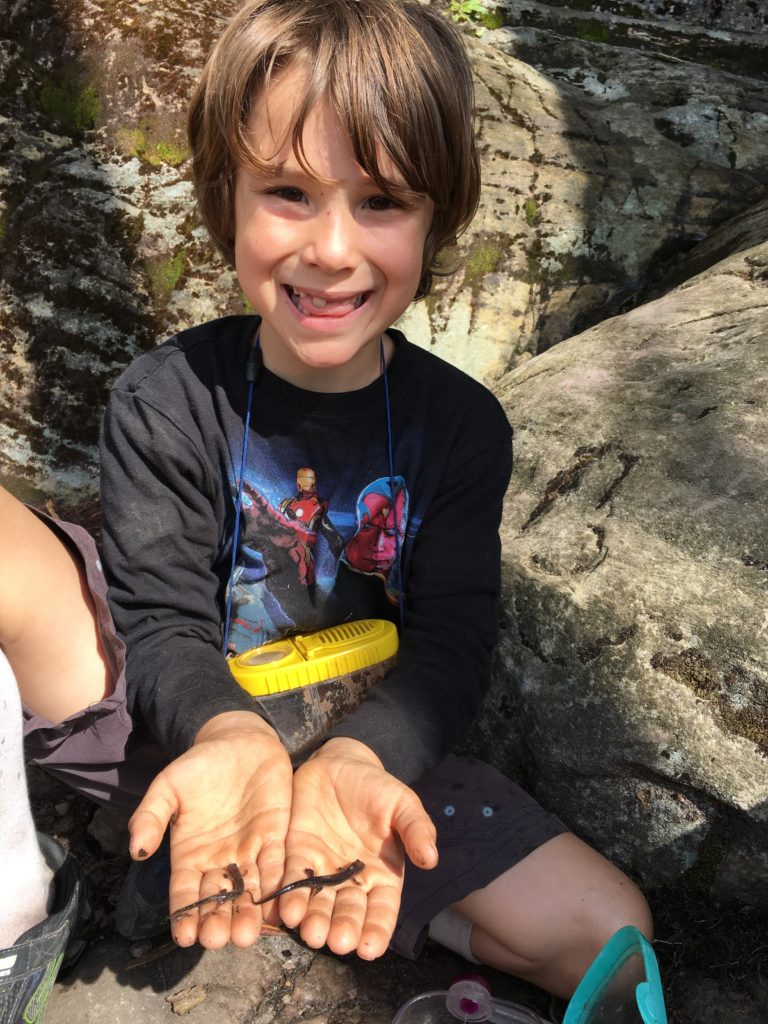 We then moved next door to Yabuisha 12a…and stayed there all day.  CragDaddy got the draws in and figured out the beta, which he then spoonfed me move for move for the entire route….until the very last move to the chains when I fell.  Aaaah, so close!!!  (But, actually, after realizing how hard that last move was to figure out, I wasn’t nearly as close as I’d initially thought!)  Curses to those heartbreak finishes!  Despite coming up short, I felt really good about my flash effort.  My 2nd attempt I fell in a random spot when I bonked my elbow on the rock mid-move (?!?), yet I was able to link the entire upper half of the route, so I felt like a 3rd go send was pretty likely, so long as I had enough gas left in the tank at day’s end.  My 3rd go felt great – there are multiple cruxes to check off before earning the chance to try the last move on point, but I felt strong throughout.  I was coming in to the finish pretty hot, but had my beta dialed and didn’t hesitate.  I set my feet and popped up to a small right hand gaston, and stuck it!  All I had to do was go once more to a better part of the crack.  But something felt off.  The next hold looked a lot farther away than I’d remembered it.  I was locking off with all my might, but all of my efforts were simply keeping me in the same place, and there was no forward progression.  After stalling out for a couple of seconds, I slumped down on the rope.  Geez.  Back to the 4×4’s at the gym I guess. 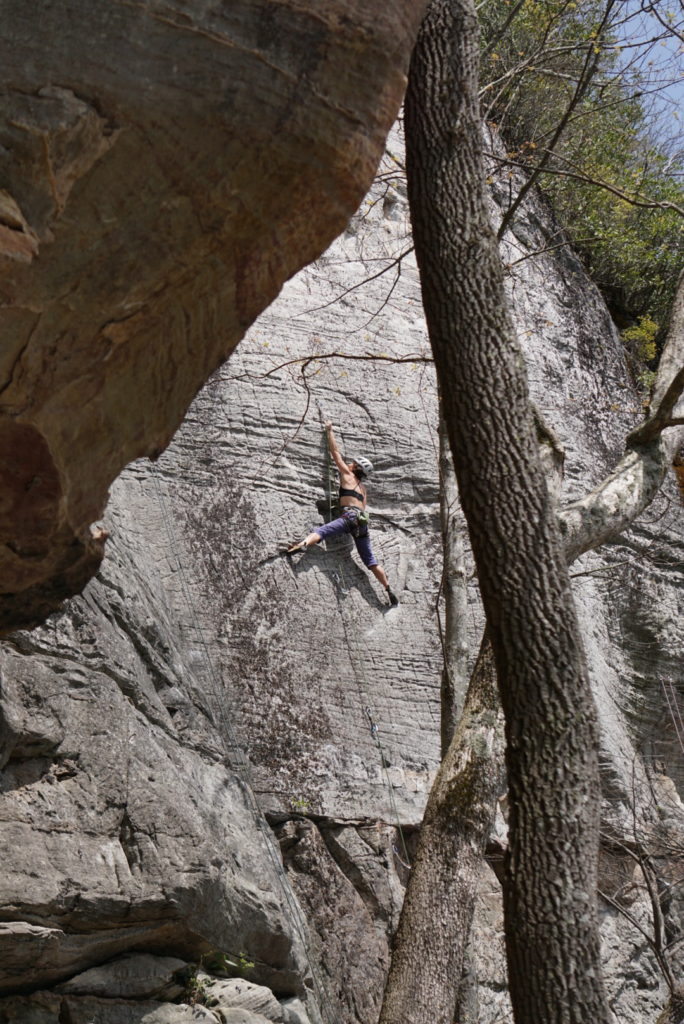 Stretched out on Yabuisha 12a 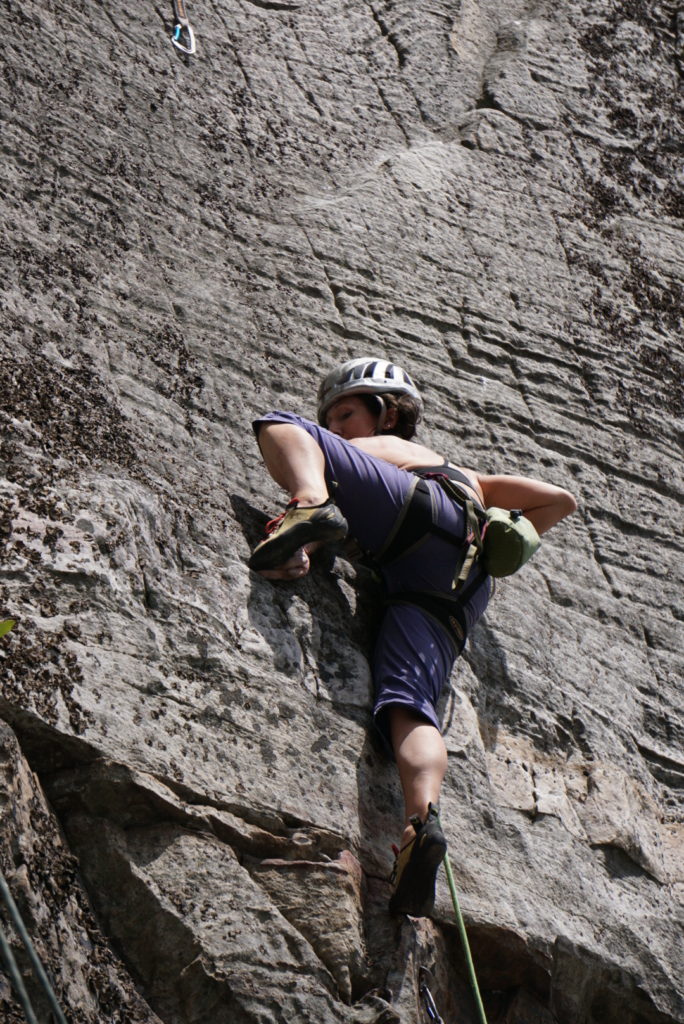 Trying real hard not to step on my finger in a hand/foot match.

Obviously, I wish I would have sent.  It’s frustrating to make it 5 feet from the anchors on my first try, then by the end of attempt 3 find myself only a half a move closer before falling.  Compared to the other 12’s we’ve been on at Hidden Valley, this one is head over heels harder.  And while I know we all like to say and act as if the numbers don’t matter, I’m gonna be completely transparent and say that if this particular grade was a little higher, I wouldn’t be so annoyed.  Ahh!  I don’t like the way that makes me sound, but if you can honestly say you’ve never once gotten sucked into a climbing grade debate, feel free to start throwing stones.  Ok, confession done.

Bottom line?  Who cares about grades – every single route I touched this weekend was fun, and Yabuisha is definitely on my “best of the grade” list for Hidden Valley!  For sure a worthy opponent, and I will for sure be coming back for it SOON.  But first, back to those 4×4’s…