All posts by Tyler Yarbrough 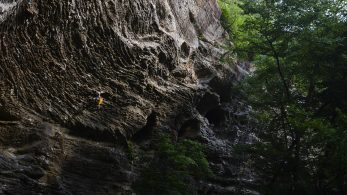 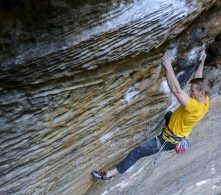 I started climbing because it looked impossible and to this day that is the aspect that continues to fascinate me most. It's unbelievably fulfilling to accomplish something you previously thought either physically, or mentally, over your personal limit. The most motivating part of climbing is going outside, looking up at a stunning wall or feature that seems impossible, and knowing that if you train hard enough and are willing to put in the sacrifices necessary, it will one day be within reach.

My most memorable climb was without doubt, the go when I sent Spank, my first 5.13, and longest ever project at the Red. On the day of the send, it was the worst conditions I’d climbed the route in all season. It had rained and been in the 80’s for the past several days, but a cold front had moved in, so we decided to go climbing anyway. First go on the route felt awful, I didn’t even get close to my high point. I lowered to the ground feeling dejected, feeling like the season was over. It was going to have to wait until the Fall, summer is here and those slopers are GREASY as hell. But looking up at the climb after that attempt, something changed. I wasn’t having fun any more. I realized I was projecting all my desires of wanting to be a 13 climber onto this route, and I kept coming back because of what it represented for me in terms of an arbitrarily graded progression. Screw it, I said to myself. This time, instead of getting overly hyped, just go up there and have fun again for the first time in a long time.

My name is Tyler Yarbrough, living in Louisville, Kentucky. I'm in a unique position as a Kentuckian in the fact that I'm a professional living in a big city, whose heart cries out to explore the woods and cliffs of the far Eastern part of our state. I'm a project manager by profession, and I spend most days sitting behind a desk. But as soon as I walk out the office, my focus shifts to my true passion; rock climbing. I spend my evenings training; climbing until my fingers are raw and bleeding, or pulling until my forearms are at the point of total exhaustion. For 6 months out of the year, nearly everything I do revolves around climbing at the Red River Gorge in Eastern Kentucky. The natural beauty of Kentucky is on display there like no other place in the state, and people come from all over the world to climb on the RRG's steep, overhanging sandstone walls. For me, it's paradise. Each Spring and Fall, I spend my days dreaming of my next adventure outside, and the next chance I'll get to push my mind and body a little bit further.